Could Kamal Haasan's Party Launch Mark the Beginning of an Axis Which Will Challenge BJP in 2019? 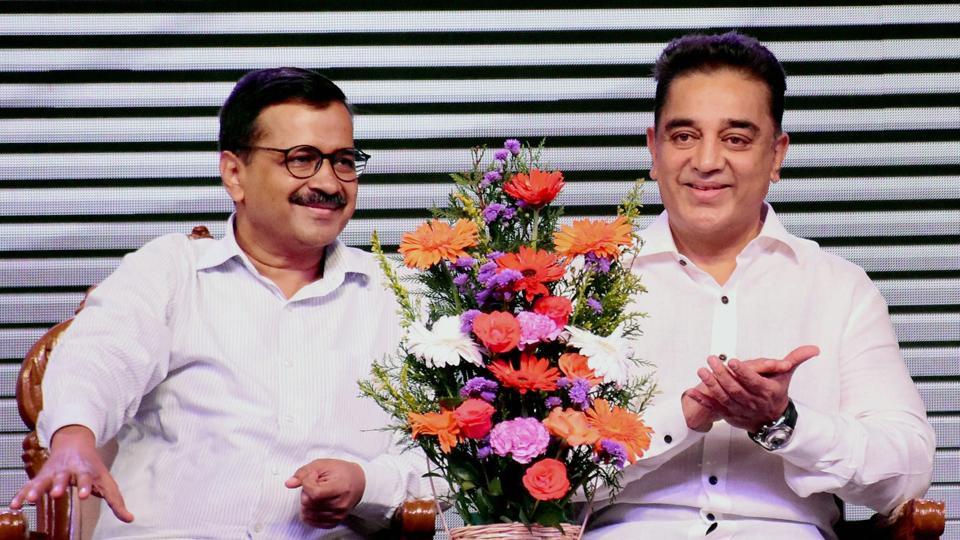 Kamal Haasan with Delhi chief minister Arvind Kejriwal during the launch of his political party in Madurai. Credit: PTI

The launch of actor Kamal Haasan’s new party Makkal Needi Maiam (MNM) this week may, in itself, not be a marker of immediate electoral significance. However, the presence of Aam Aadmi Party (AAP) leader and Delhi chief minister Arvind Kejriwal at the launch rally in Madurai and the positive response that the MNM has elicited from Kerala chief minister Pinarayi Vijayan and Andhra Pradesh chief minister Chandrababu Naidu, gesture towards possibilities of new political alignments. Alignments that that could crystallise into either clumsy or even well-defined anti-Bharatiya Janata Party (BJP) political formations in the 2019 Lok Sabha elections.

In this context, Vijayan’s congratulatory message to Haasan is of as much significance as Naidu’s to the actor-turned-politician. The Telugu Desam Party (TDP) leader has urged Haasan to “prepare a list of things to do for the people beyond policies.” In a column in the Tamil magazine Ananda Vikatan earlier this month, Haasan acknowledged the CPI-M’s Vijayan to be his “guiding light,” instrumental in “clearing his political doubts.” The Kerala chief minister, stressed Haasan, had inspired him to launch a political party. In his congratulatory message on Wednesday, Vijayan said that Haasan’s party will strengthen Kerala in its fight to safeguard secularism, socialism and a pluralistic society.

That two political protagonists from the southern states of Kerala and Andhra Pradesh have reached out to Haasan, seems to raise a pertinent question: Can a southern electoral axis be in the making? An axis which will eventually challenge the BJP in the next general elections? The political or tactical convergence among the southern states of Kerala, Karnataka, Telangana and Andhra Pradesh assumes particular important in the context of Haasan’s new party.

As of now, Haasan has described himself as a “centrist” with no Left or Right leanings. These are still early days to make predictions about the political direction his party may take in the future. But that the launch was attended by a staunch BJP adversary like Kejriwal seems significant for the kind of politics that may come into play when and if Haasan’s party comes into its own.

Certain similarities between Kejriwal and Haasan are difficult to ignore. Like the AAP chief, Haasan too, has entered the political and electoral system as an outsider. It’s also interesting that in his speech at the Wednesday rally, he identified education as one of the primary sectors that his party is going to focus on. The AAP government in Delhi has already made a mark for itself by investing its resources – financial and human – in school education. Urging the people in Tamil Nadu to vote for Haasan’s party and defeat AIADMK and the DMK, at the rally, Kejriwal said: “People of Tamil Nadu should break the record of people in Delhi by electing an alternative political party led by Kamal Haasan… If you have an honest government, everything is possible. Delhi is witnessing a complete transformation in education, health, power and many such essential sectors.”

Consider now the positive responses that came from Vijayan and Naidu to greet Haasan’s new party. There are political implications in both cases. Vijayan, as we know, is as staunchly opposed to the BJP as is Kejriwal. The vicious and violent battle between the CPI-M and the RSS, though going back decades, has of late sharpened more than before. Relations between the BJP and Chandrababu Naidu too have soured. Accusing the ruling BJP of short-shrifting his TDP, Naidu has been making noises about quitting the National Democratic Alliance. After the 2018-19 Union budget was presented in parliament, Naidu complained about the “insufficient” allocations to Andhra Pradesh. In fact, he even talked about bringing a no-confidence motion against the Narendra Modi government – but only as a last resort, he clarified. “We will continue our fight for justice to AP. If that doesn’t happen, we will muster support from other parties and other parties and move the no-trust motion.”

All is clearly not well in the NDA. There is a perception in political circles that the allies will begin to desert the ship if the ground under the BJP’s feet starts slipping. The series of assembly elections that are scheduled later this year – beginning with Karnataka – will clear the picture somewhat. Shiv Sena, the BJP’s oldest partner, has already announced its decision to go it alone in the 2019 elections. 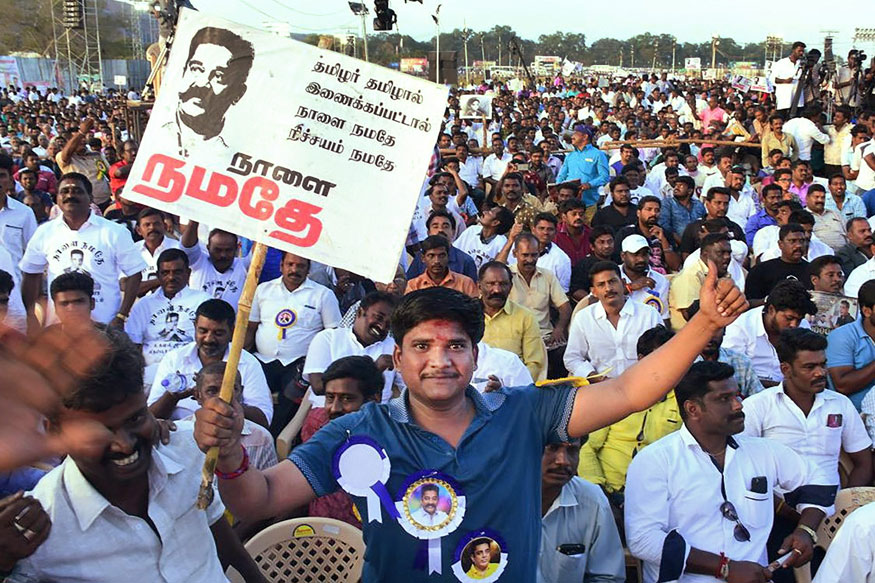 People gather in support of Tamil film icon Kamal Haasan as he announces the launch of his political party Makkal Neethi Maiam, in Madurai. Credit: PTI

In the east, Trinamool Congress chief minister Mamata Banerjee has declared a full-blown war on the BJP. She has given repeated calls to the Left parties and other anti-BJP parties to put up a joint electoral challenge to the BJP. Before the Janata Dal (U) chief minister Nitish Kumar turned renegade, there had been increasing talk of forging an opposition alliance including the TMC, JD(U) and AAP – parties then on a warpath against the BJP. Since then, Nitish has abandoned the opposition and teamed up with the BJP. Banerjee and Kejriwal however, have stayed the course, challenging the BJP at every step. In Odisha, the Biju Janata Dal chief minister Naveen Patnaik, is feeling the heat. Recently he suspended his one-time trusted lieutenant and four-time member of parliament, Baijayant Panda. Panda was accused of indulging in anti-party activities. His repeated praise of Modi and his proximity to the BJP are considered to be among the reasons that led to his expulsion.

The BJP leadership has made no bones about the fact that the party is looking to make serious electoral gains in the eastern and north eastern region. The high-level attention the BJP paid to the recent Bijepur bypolls in Odisha is indicative of the party’s keen electoral interest in the state. A report in the Economic Times pointed out: “Right now the otherwise quiet Odisha district of Bargarh is seeing more union ministers, parliamentarians, MLAs, film stars, politicians and their entourage than any poll in Odisha may ever have. Odisha’s two Union ministers, Dharmendra Pradhan and Jual Oram, have been camping in western Odisha district for the last five days. Smriti Irani addressed three rallies on Monday, her colleague Santosh Gangawar has already made a trip.”

The process of political churn is beginning to gather momentum. We are yet to see the making of a broad front of opposition – the kind witnessed in the post-Emergency period in 1977, or later in 1989 and 1996. Earlier there was even talk of a fourth/federal front, opposed to both Congress and BJP. In fact, it was Mamata Banerjee, who was one of the most vocal and early advocates of forging a federal front. At her government’s second swearing in ceremony in Kolkata in May 2016, Banerjee urged regional leaders like Lalu Prasad, Akhilesh Yadav, Kejriwal and Nitish to put together a federal front to checkmate the Centre ruled by the BJP.

The space for an opposition front is vacant as of now. But a lot could happen between now and the Lok Sabha election in 2019. Kamal Haasan’s new party is another piece of straw in this gathering wind.