BJP won or was ahead in 40 seats while Congress and its allies won in Jharkhand, Chhattisgarh and Haryana. Odisha's ruling Biju Janata Dal won both seats in the state. New Delhi: If there was one common thread that ran through the by-elections to 58 seats in 11 states it was that in most people voted largely for the party or the alliance in power.

While Bharatiya Janata Party and its alliance partners won half or more seats in seven states, the Congress and its allies bagged the most in three. Biju Janata Dal won both the seats in Odisha. The lone seat of Baroda in BJP-ruled Haryana, was the only one where a ruling party did not win. It went to the Congress.

Among the states, the by-polls were most crucial for Madhya Pradesh, where the Shivraj Singh Chouhan needed to win nine of the 28 seats that went to polls to secure a complete majority. The BJP had by 10 pm been declared winner in 14 seats and was leading in six, while the Congress had won five and was leading in three.

The Chouhan government would have heaved a sigh of relief by nightfall on Tuesday. The party at the moment has 107 members in the 230-member assembly. It also enjoys the support of two Bahujan Samaj Party, one Samajwadi Party and one independent MLA.

The by-polls to 22 seats were mandated after Congress MLAs left the party with former Union minister Jyotiraditya Scindia, dislodging the 15-month-old Kamal Nath government and re-installing Chouhan as chief minister in March this year. This had reduced the strength of the Congress to 88 MLAs. The party needed to win all 28 seats, but was only ahead or winning in six.

The poll trends also come as a shot in the arm for Scindia. With several of the candidates backed by him leading, this is likely to increase his say within his new party.

Several Scindia loyalists like Rajyavardhan Singh Dattigaon, who defeated Kamalsing Patel of the Congress by 32,133 votes in Badnawar, won by big margins.

These polls are also important as they would determine the fate of 12 former ministers. Among these ministers, several won today. Madhya Pradesh health minister Prabhuram Choudhary defeated Madanlal Choudhary of the Congress by 63,809 votes in Sanchi.

Also read: Will the Madhya Pradesh Bypolls Mark the Possible Decline and Fall of Jyotiraditya Scindia?

In Surkhi, which is a seat where erstwhile leaders of Congress and BJP are contesting from opposite parties, former minister Govind Singh Rajpoot, who had won the seat as a Congress candidate in 2018 and is the BJP candidate this time, won by a margin of 40,991 votes. He defeated Parul Sahu Keshri of the Congress, who contested the last polls as a BJP candidate.

In Sumawali, Aidal Singh Kansana of the Congress had defeated Ajab Singh Kushwaha of the BJP in 2018 polls. After Kansana joined the BJP and the party gave him the ticket, Kushwaha resigned and joined the Congress, which gladly fielded him against his arch-rival.

That decision of the Congress appears to have paid off. Kushwaha won the seat by defeating Kansana by 10, 947 votes.

One of the biggest victories was recorded by the BJP candidate from Bamori, Mahendra Singh Sisodia, who defeated former cabinet minister in the Shivraj Chouhan government, Kanhaiya Lal Agarwal, by a margin of 53,153 votes. Agarwal had moved to the Congress and was contesting as its candidate.

In Gujarat, the BJP won all the eight seats. By-elections in Gujarat were necessitated after eight Congress MLAs resigned from the party ahead of the Rajya Sabha polls that were scheduled in June, 2020.

Out of these eight MLAs, five had joined the BJP and were nominated for the by-polls. Rebel Congress MLA Jitu Chaudhary who contested on a BJP ticket from Kaprada seat, won by 47,066 votes against Congress candidate. 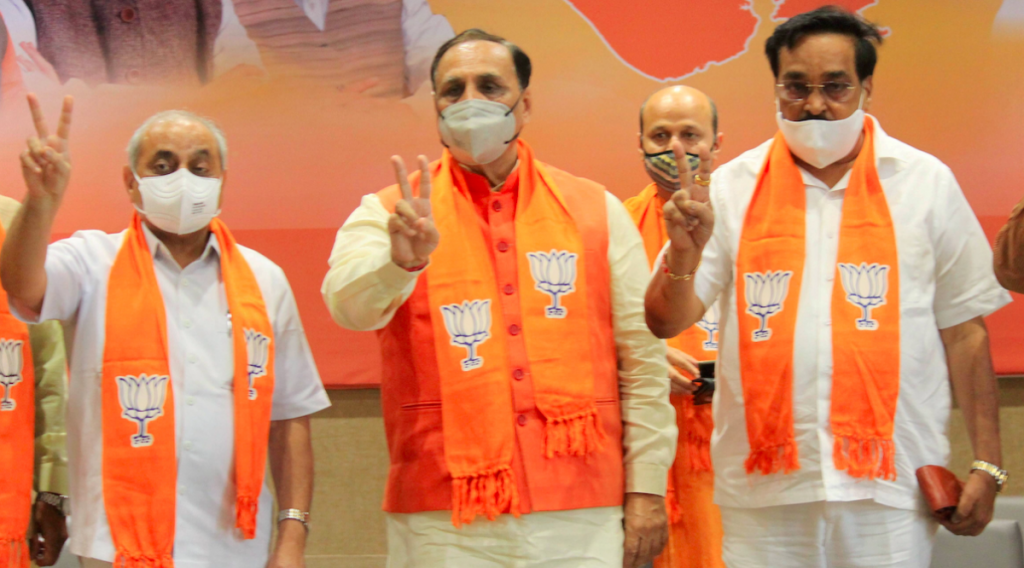 The contest was the closest in Morbi, where BJP’s Brijesh Merja won by mere 4,649 votes against Congress’s Jayantilal Patel.

Bypolls are being held in seven seats in Uttar Pradesh. These are Tundla, Ghatampur, Naugawan Sadat, Bulandshahr, Bangermau, Deoria and Malhani.

Samajwadi Party has won one out of the seven seats, Malhani. The BJP won the remaining six seats. Previously too, six of these seats were held by the ruling BJP and one by the Samajwadi Party.

Lucky Yadav of SP won the Malhani seat by a total of 4,632 votes against independent candidate Dhananjaya Singh.

Neither the Bahujan Samaj Party, nor the Congress won any seats.

The contest for both Sira and Rajarajeshwari Nagar seats in Karnataka turned out to be quite one-sided with BJP winning both by big margins against the Congress. With this the party would also increase its strength in the 224-member House to 119. It also enjoys the support of three independent MLAs.

The R.R. Nagar seat, which fell vacant in July 2019 after its representative and Congress MLA N. Munirathna defected to the BJP, has again been retained by Munirathna – this time as a BJP candidate. He defeated H. Kusuma of the Congress by 58113 votes. Krishnamurthy V. of the JD(S) ended up a distant third managing to secure just 4.9 per cent of the votes.

The strength of the Jharkhand Mukti Morcha-Congress alliance in Jharkhand will grow as the parties bagged a seat each in the by-elections held to the Dumka and Bermo assembly segment.

While 12 candidates contested the Dumka seat, 16 were in the fray in Bermo.

The by-elections will not impact the power equation in the state which has 82 members in the assembly. The Jharkhand Mukti Morcha-led government enjoys a full majority of 48 seats with the support of Congress that has 17 members and other parties like RJD, NCP and CPI(ML) with one each.

The by-elections to this seat were necessitated after the CM vacated it, while retaining the Barhait seat following the assembly elections in December 2019. In the by-polls, the party decided to field his brother Basant and the decision proved to be a right one as he won by a comfortable margin against BJP’s former cabinet minister.

The ruling Bharatiya Janata Party has won four of the five assembly seats to which by-elections were held in Manipur. While its candidate from Singhat, Sinsuanhau, was elected unopposed, in a rare election in Saity, where just two candidates were in fray, its candidate Ngamthang Haokip defeated Lamtinthang Haokip of Congress by 12,144 votes.

Overall 13 assembly constituencies were lying vacant in the 60-member Manipur Legislative Assembly following disqualifications of and resignations by MLAs. However, polls were only held in five, as several court cases are pending.

The by-elections are not likely to make any significant change as the BJP-led coalition in Manipur has a clear majority with 34 seats in the House, with the Congress having 17 members and AITC, one.

The saffron party had formed its first government in the state in 2017 with N. Biren Singh as the chief minister. The BJP had won 21 seats, got the support of National People’s Party, Naga People’s Front and the Lok Janshakti Party. Though the Congress emerged as the single largest party with 28 seats, it was unable to form the government. Subsequently, seven Congress MLAs – who helped the BJP in forming its government – had also joined the saffron party. They were later barred by the high court from entering the assembly.

It turned out to be a direct fight between two Independent candidates in the Muslim-dominated Lilong seat in Manipur with the Congress candidate ending a distant third with just 0.43 per cent of the votes and 11 less than NOTA, which got 153.

It was a rare election between just two parties in Saitu, with no other party or Independent entering the fray. Finally, BJP’s Ngamthang Haokip defeated Congress candidate Lamtinthang Haokip by a margin of 12,144 votes.

The election was not without its share of drama. Following voting, Lamtinthang and Manipur Pradesh Congress Committee had demanded a re-poll in six polling stations alleging irregularities at the behest of the BJP.

The MPCC had in a statement said: “The polling procedure of the said polling station was irregular to the extent that since the start of the polling process, all voting has been done through proxy voting.”

The party had also alleged that cadres of Kuki Revolutionary Army – which is under suspension – had campaigned for the BJP candidate. Lamtinthang also alleged that the KRA tried to kill him while he was campaigning in Kangchup Tuikun village on October 28.

Nagaland: Ruling NDPP adds another seat to its tally

The ruling National Democratic Progressive Party-BJP alliance in Nagaland added another seat to its kitty when the NDPP candidate from Southern Angami – I, Medo Yhokha, defeated an Independent, Seyievilie Peter Zashumo by a mere 598 votes.

In Southern Angami seat, where the election took place following the death of sitting MLA and former Nagaland assembly speaker Vikho-o Yhoshü in December 2019, there were only three candidates in fray.

The ruling NDPP fielded Yhokha, who is a former youth leader and social worker. The candidate for the opposition Naga People’s Front (NPF) was an entrepreneur, Kikovi Kirha.

Zashumo, the former personal assistant of Yhoshu, contested as an Independent. Finally it turned out to be a close contest between Yhoka and Zashumo.

The Pungro-Kiphire seat had just five candidates, of whom three were Independents.

This seat had fallen vacant after NPF MLA T. Torechu passed away in December 2019. However, NPF decided not to field any candidate this time.

The Congress staged a comeback in the Marwahi assembly seat, that fell vacant after former chief minister Ajit Jogi’s death. Its candidate, K.K. Dhruw, had taken a winning lead of 38,197 votes over his nearest rival, Gambheer Singh of the BJP.

The seat was earlier represented by the Janata Congress Chhattisgarh (J) MLA who passed away in May this year. As the nomination of his wife, Richa Jogi, was rejected on technical grounds, a re-poll was ordered.

For the first time in nearly two decades no one from the Jogi family contested this seat. The JCC(J) extended support to the BJP candidate, Gambheer Singh, saying the Congress had insulted Jogi. The Congress fielded Krishan Kumar Dhruw, a medical practitioner.

Odisha: Biju Janata Dal gets the better of BJP

The ruling Biju Janata Dal bagged both the Balasore Sadar and Tirtol Assembly seats by comfortable margins as its candidates took unassailable leaders over their nearest BJP rivals.

Swarup Kumar Das of BJD looked all set to wrest the Balasore Sadar seat from Manas Dutta of the BJP as he led by a margin of 11,588 votes. This seat had fallen vacant after the death of Dutta’s father and former BJP MLA, Madan Mohan Dutta. The saffron party had then fielded Manas expecting the sympathy wave to work in his favour.

However, Das got the better of Dutta. The Congress candidate, Mamata Kundu, trailed in the third position.

In Tirtol too, the BJD candidate, Bijay Shankar Das, led by a comfortable margin of 35,481 votes against his nearest rival, Rajkishore Behera of the BJP. Himansu Bhushan Mallick of the Congress was in the third position.

The election was necessitated by the death of Bijay’s father and BJD MLA Bishnu Charan Das. The party had then decided to field his son as its candidate.

Though the by-polls could not have changed the political dynamics in Odisha, where BJP enjoys a brute majority with 113 MLAs in the 147-member House, the Naveen Patnaik government left no stone unturned to press for Bijay’s election. It had deployed over a dozen ministers and 35 legislators for the campaign.

Indu Raj of the Congress defeated Olympic bronze winning wrestler Yogeshwar Dutt of the BJP from the Baroda seat in Haryana by a margin of 10,566 votes. The seat had fallen fell vacant after the death of Congress MLA Sri Krishna Hooda in April this year.

Dutt had lost to Hooda by 19,000 votes in the 2019 polls. This time, he was again given the ticket by BJP. However, Raj managed to retain this Jat-dominated seat which falls in an area where former Haryana chief minister Bhupinder Singh Hooda still wields considerable influence.