'What the President counted as achievements are divisive and discriminatory.'

Opposition leaders including Sonia Gandhi and Rahul Gandhi stage a protest against CAA and NRC in front of Mahatma Gandhi statue ahead of the Budget Session of Parliament, in New Delhi, on January 31. Photo: PTI

New Delhi: The first day of the Budget Session in parliament was marked by loud cries of “shame” by opposition members as President Ram Nath Kovind praised the controversial Citizenship Amendment Act (CAA) that has triggered nationwide protests.

Kovind invoked Mahatma Gandhi to back the CAA in his address to the joint session.

“The father of our nation – Mahatma Gandhi ji – had said after partition that Hindus, Sikhs, Buddhists, Jains, and other religious minorities in Pakistan and Bangladesh (East Pakistan) should be granted citizenship of India if they came seeking refuge. We must respect and honour the wishes of the father of the nation. To that effect, I am happy that both houses of Parliament passed the Citizenship Amendment Act to ensure Bapu’s wishes come true.”

He was soon interrupted by opposition members’ loud desk thumping and chanting.

Opposition members kept protesting as Kovind went on to selectively speak about violence during the demonstrations against the controversial law.

“Before being anything else, we are first a citizen of India, and our duty of being a citizen of this nation comes above all else, including out personal beliefs and wants,” he said. 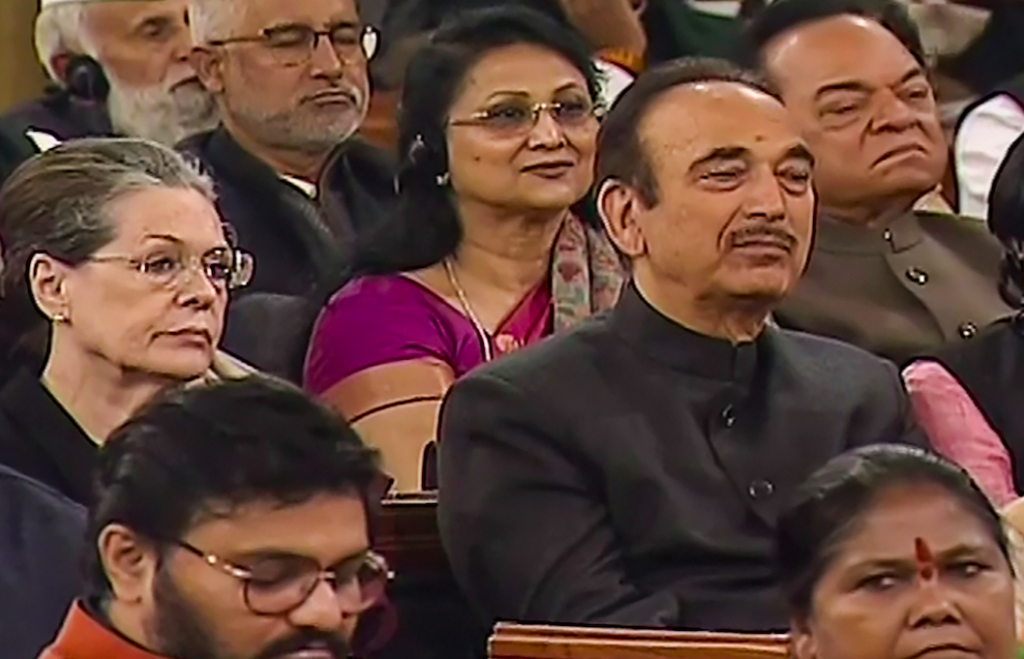 Congress President Sonia Gandhi, leader Ghulam Nabi Azad and others during a joint session of both the houses ahead of Budget Session, at the Central Hall of Parliament, in New Delhi on January 31, 2020. Photo: LSTV/PTI

As Kovind spoke about significant legislations like dilution of Article 370 passed in the last session, the ruling coalition members thumped their desks in support.

“[The year] 2019 saw some landmark decisions. Parliament’s decision on Jammu and Kashmir was one of them. I congratulate the people of both Union Territories – J&K and Ladakh. They will now benefit from all that the rest of the country benefits from. The pace at which development activity will take place in the two union territories will also increase significantly,” said the President.

The opposition protests began Friday morning in front of Gandhi’s statue where members of parliament sat on a dharna sporting black bands on their arms with “Save India” placards.

Later, in a show of solidarity, 14 parties came together to sit together in the back benches of the parliament during the President’s address. Soon after his speech, opposition leaders Ghulam Nabi Azad, Anand Sharma and Communist Party of India (Marxist)’s general secretary Sitaram Yechury addressed the press. 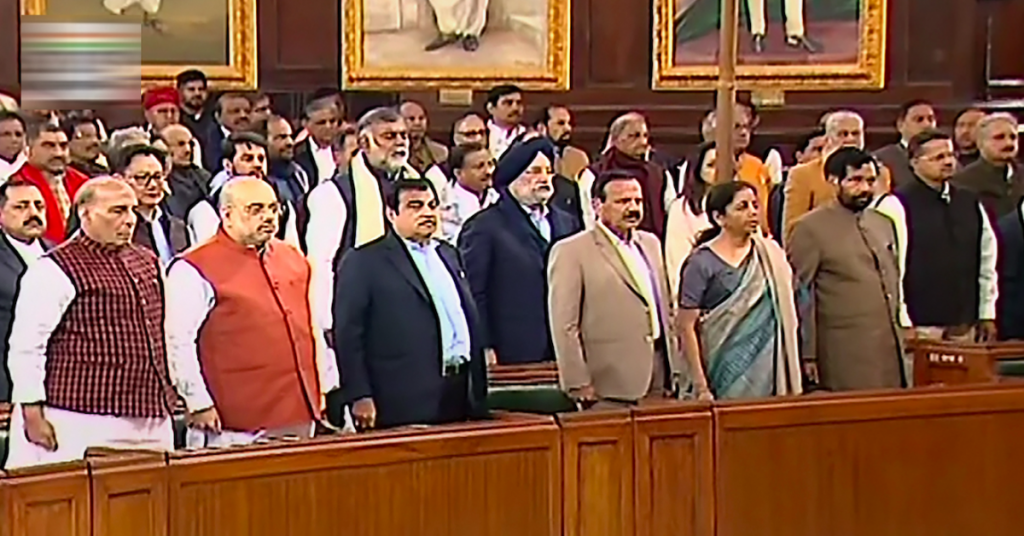 Defence Minister Rajnath Singh, Union Home Minister Amit Shah, Union MSME Minister Nitin Gadkari and other ministers stand for the national anthem before the beginning of a joint session of both the houses ahead of Budget Session, at the Central Hall of Parliament, in New Delhi. Photo: PTI

“At a time when the youth of India are on the streets to protest against CAA and the National Population Register, it is a matter of shame that the President has counted them as governments achievements,” Azad said.

“There was an attack on JNU by masked goons backed by the ruling party. Thirty young people died because they were targeted by BJP-led government’s bullets. Thousands have been injured. Yet, the President who was speaking on behalf of the union government claimed that these laws were its achievements,” he said.

“Unemployment is an all-time high. GDP growth rate is falling continuously, and so is the value of our currency. Even after six months (since the reading down of Article 370), the government opens telephone lines only for a few hours. Despite this, the President claims that there was a lot of developmental activities in Kashmir in the last six months. What could be a greater matter of shame,” said Azad.

Sharma said that President’s speech was a crude joke on Indian people, and what he counted as his government’s achievement was nothing but a “laundry list of wrong laws.”

“Today is an unfortunate day for the nation. What the President counted as achievements are divisive and discriminatory. Those laws were the primary reason behind our nation’s sorrows. The government has not only shown that it does not respect constitutional morality but also shown that it lacks compassion,” Sharma said.

The opposition protests came a day after an all party meeting-led by Speaker Om Birla on Thursday. Barring the AIADMK, all non-BJP parties, including BJP ally Shiromani Akali Dal, opposed the CAA and the proposed NRC during the meeting.