More than 10 persons were injured and six vehicles were set ablaze in Tripura on September 8, after alleged BJP workers attacked offices of three media houses and three offices of the CPI(M). 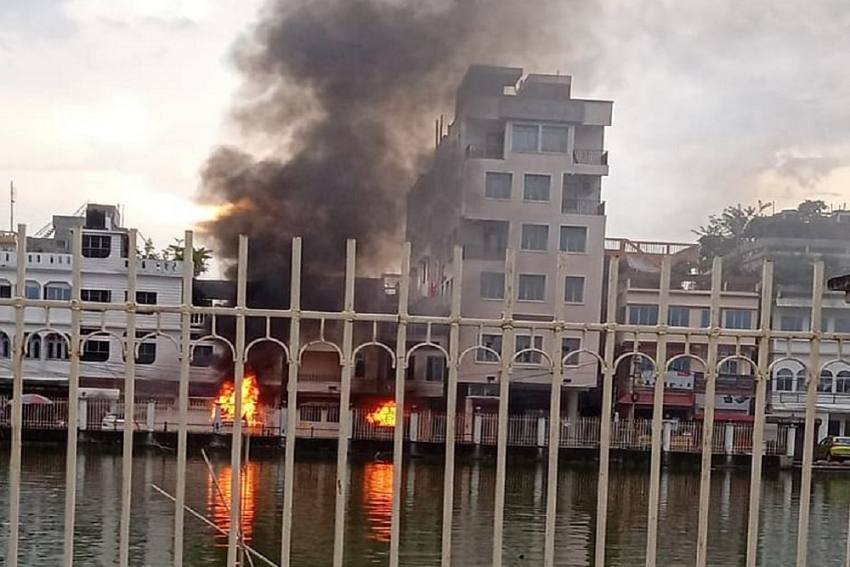 A photo of the Tripura violence on September 8. Credit: Twitter@cpimspeak

Agartala: A Bharatiya Janata Party (BJP) Yuva Morcha leader was on Sunday, October 3, arrested by the crime branch for purportedly attacking media houses in Agartala on September 8 and was later sent to judicial custody by a local court until October 5.

The man was identified as Raghu Lodh (32) and is a state co-spokesperson of the Bharatiya Janata Party (BJP)’s youth wing.

Lodh was charged under Indian Penal Code (IPC) sections 447 (punishment for criminal trespass), 448 (punishment for house-trespass), 427 (mischief causing damage), 436 (mischief by fire or explosive substance with intent to destroy house, etc.) and 326 (voluntarily causing grievous hurt by dangerous weapons or means) for allegedly vandalising the office of Pratibadi Kalam newspaper office. In a separate case, he was also accused of burning a vehicle and vandalising the office of a political party.

While speaking with reporters, assistant public prosecutor Khokan Debnath said Lodh was arrested and produced before the additional chief judicial magistrate’s court in Agartala on Sunday.

“The investigating officer informed that the accused was arrested at 11 am on Sunday. They sought police custody for four days but the court sent him (Lodh) to judicial custody until October 5”, assistant public prosecutor Khokan Debnath told The Wire.

More than 10 persons were injured and six vehicles were set ablaze in the violence that erupted in various parts of Tripura on September 8, after alleged BJP workers attacked offices of three media houses and three offices of the Communist Party of India (Marxist) [CPI(M)].

The three media houses that came under attack were the Pratibadi Kalam daily and its TV channel PB24, the daily Desher Katha in Agartala, and Duranta TV channel based in Udaipur in Gomati district. The CPI(M) state head office and sub-divisional office in the Melarmath area of West Tripura district and a local party office in Bishalgarh were also attacked.

BJP criminals burn Bishalgarh office of the CPI(M) and were helped by the police. BJP is using state machinery to attack the opposition voices in the state. This cowardly attack must immediately stop. pic.twitter.com/jwXzD6HHWX

Following the incident, Chowdhury filed a complaint with the West Agartala police station and also accused the police of inaction. Therefore, on September 9, the state government handed over the investigation to the crime branch.

However, BJP Yuva Morcha state president Nabadal Banik told The Wire that Lodh hasn’t been found guilty and is still being interrogated by the police.

“The police administration has been working transparently and they never had a partisan role in last three and half years. During the 25-year long Left regime, police transparency was suppressed and they worked as party cadres of the CPI(M). With the formation of the BJP-led government, the police administration has been working in a transparent manner. Police, in a neutral way, have arrested someone. The police is investigating the case, whatever findings come in the report will be seen in the coming days. If someone is summoned and questioned, that doesn’t mean that the person is a criminal,” Banik said.

He added, “Earlier, many were summoned and questioned, and later it was revealed that those persons were not guilty. Since the police are probing this issue, it’s not proper for us to comment on it. We shall work with full faith in the law.”

In a related development, a video of Lodh trying to attack the Sadar sub-divisional police officer Ramesh Yadav at Maharaja Bir Bikram College in Agartala has gone viral. The video has allegedly been taken down.

A senior official from the crime branch, on the condition of anonymity, told The Wire that they have identified one more person named Ashok Debnath.

“Pressure was mounted on us to arrest the persons behind the attack on media houses. We arrested one person named Raghu Lodh. He had earlier also misbehaved with a senior IPS officer. We have identified another one named Ashok Debnath. He is under our radar. We have identified him verifying CCTV footages,” the crime branch official said.