"Just because the BJP cannot defeat Kejriwal, it is trying to kill him. Today's incident was a pre-orchestrated plan of the BJP to murder him," Sisodia added. 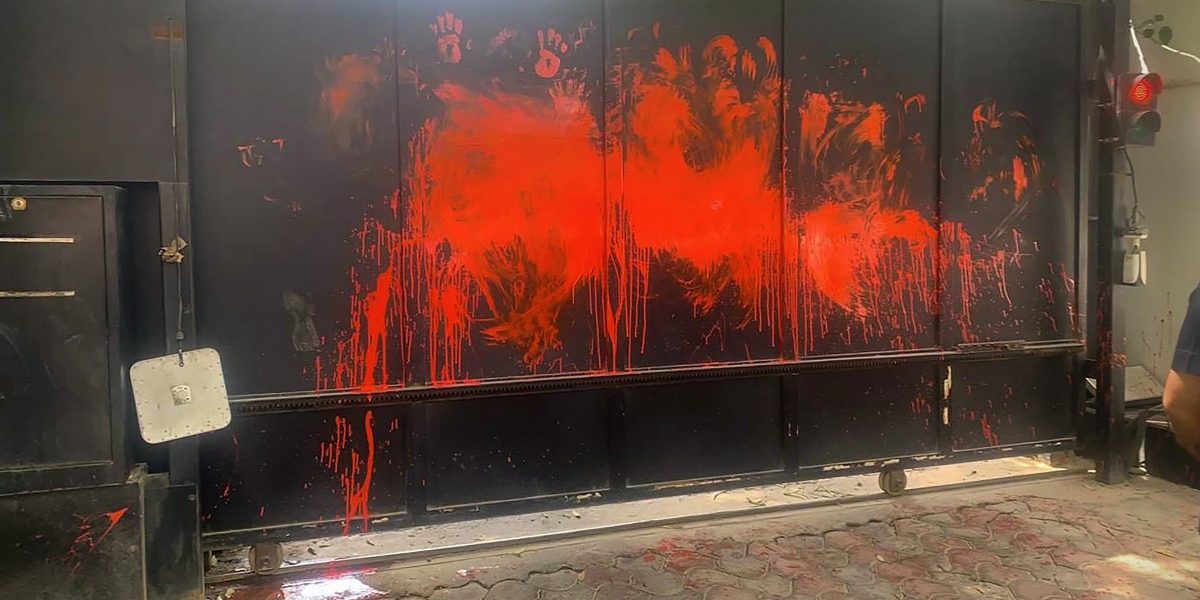 The vandalised gate of residence of Delhi Chief Minister and AAP convener Arvind Kejriwal, after the BYJM protest in New Delhi. Photo: PTI

The BJYM led by its president Tejasvi Surya staged a protest at Kejriwal’s residence here demanding his apology for allegedly “mocking” Kashmiri Pandits.

In a tweet, deputy chief minister Manish Sisodia claimed that anti-social elements attacked and damaged CCTV cameras and security barriers at Kejriwal’s residence in Delhi. The boom barrier at the gate was also broken, he said.

“The goons of the BJP resorted to vandalism at CM Arvind Kejriwal house. BJP’s police instead of stopping them, took them to the gate of the house,” Sisodia said in another tweet.

According to Hindustan Times, Sisodia said that because of AAP’s victory in the Punjab assembly elections, “the BJP wants to murder Arvind Kejriwal”.

“Just because the BJP cannot defeat Kejriwal, it is trying to kill him. Today’s incident was a pre-orchestrated plan of the BJP to murder him,” Sisodia added.

Shocking! What was @DelhiPolice doing when BJP workers and leaders were doing rampage at CM @ArvindKejriwal’s residence? Did they have orders from @AmitShahOffice to support the BJP vandals? https://t.co/Q23fU4ZKNz

Delhi home minister Satyendar Jain also alleged that the “attack by the BJP people took place in the presence of Delhi Police personnel during which CCTV cameras and barriers were broken.”

BJYM national secretary Tajinder Pal Singh Bagga said the workers and leaders of the organisation staged a protest near Kejriwal’s residence but did not resort to vandalism.

“We were stopped by the police and around 20-25 of our members and leaders, including Tejasvi Surya, were detained and taken to a police station. They were later released,” Bagga told PTI.

The BJP and AAP have been engaged in a word of wars over The Kashmir Files movie, with Kejriwal recently attacking the party and Prime Minister Narendra Modi in the Delhi Assembly over the issue.

The BJP leaders and workers have been assailing Kejriwal and accusing him of “mocking” the pain of Kashmiri Pandits and terming the movie based on their “genocide” in Kashmir a lie.

DCP (North) Sagar Singh Kalsi said, according to the Indian Express, “Today at around 11.30 am onwards, a dharna was started by around 150-200 protestors of BJP Yuva Morcha outside the CM’s residence at Link Road near IP College, against the remarks of chief minister in Delhi Vidhan Sabha regarding the movie ‘The Kashmir Files’. At around 1 pm, some of the protestors breached two barricades and reached outside the CM’s residence, where they created ruckus and shouted slogans.”

“They were carrying a small box of paint from which they threw paint outside the door. In the imbroglio, a boom barrier arm was also found vandalised as also a CCTV camera. Police team immediately removed them from the spot and detained around 70 persons. Legal action is being initiated,” he added.