Modi has no clear vision, nor does he have the patience to comprehend complexities. Therefore, the hope that the state is now headed for rapid development is misplaced. 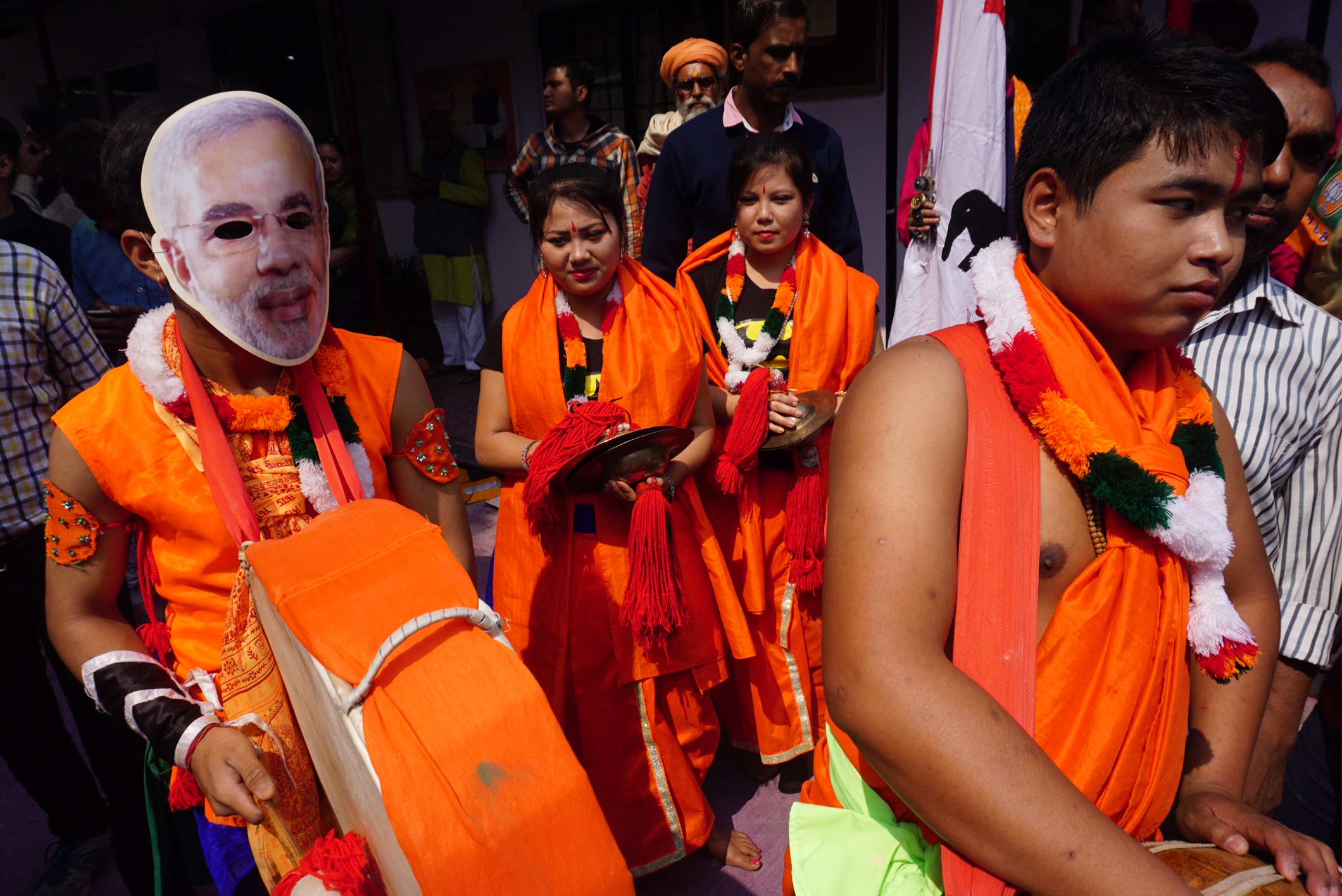 Outside the BJP office, Delhi on March 11. Credit: Shome Basu

A denial of the BJP’s sweeping victory in the 2017 Uttar Pradesh assembly polls will be to insult the public mandate. But somehow, this victory is quite frightening. Going beyond the politics of Ambedkarism, Mandalism and, to some extent, the Ram temple, the verdict is about giving shape to the aspirations of 22 crore people for development.

One must also accept the mandate because the people of Uttar Pradesh want a state government aligned with the Centre, which for a long time has remained a distant dream. All the previous governments in the state in recent memory were either not in power at the Centre or only offered support from the outside. The people of the state now want to experience how it feels to work in liaison with the Centre. The state has seen the limits of efficiency of its local leaders. She may have the reputation of being a tough leader but Mayawati set new records of corruption while her lack of hold on law and order was also eventually exposed. On the other hand, Akhilesh Yadav, instead of working towards a new model for the state, wasted his tenure resolving issues arising out of dynastic politics and the dominance of criminals.

However, Prime Minister Narendra Modi’s contribution to this victory was the most crucial. His rhetoric-laden, outspoken and dictatorial personality may not win approval from leftist intellectuals and democratic-minded people, but the general masses seem to applaud it. He continues to appeal to the youth and the middle class, and has equal resonance in urban and rural areas alike. The way his party managed to sweep an agriculture-based state economy with 312 seats even after the disastrous demonetisation drive is indicative of how Modi maintains a strong, robust image similar to Indira Gandhi. His speeches have a magical charm; listeners lose their own sense of judgment and can think of nothing but their religion – and the dream of achche din.

The results of the UP assembly polls are frightening in many ways. First, people voted for Modi in 2014 on a number of promises and expectations, but none of them have been fulfilled in the last two and a half years of Modi rule. Though the public has given Modi a clear mandate in what can be seen as an extension of the 2014 Lok Sabha results, here too his rule will turn out to be a disappointment. The reason is obvious. Modi has no clear vision, nor does he have the patience to comprehend a complex situation. He is a skilled preacher of a global capitalism that is in crisis and of a Hindu nationalism that is past its prime. He himself does not know the way ahead on the path which he has led the people to. Modi finds it insulting to seek advice from experts or associates. Therefore, the hope that the state will now be put on the road of rapid development is misplaced.

The BJP is most likely to appoint a weak and inexperienced person as chief minister, similar to the appointment of Manohar Lal Khattar in Haryana. The situation will be highly challenging for the new CM. It will lead to a crisis within the party and ultimately disappoint the people of UP.

A third possibility arises when the BJP government fails to give new shape to the state’s development. That is when it will launch its campaign to build the Ram mandir. This may even happen right away, because this is the first time the BJP has got a clear majority at the Centre and state. For the RSS, it is a golden opportunity to construct the temple. The Hindutva brigade will run their campaign. Vinay Katiyar and Uma Bharti have already said that the Ram mandir must be built. Yogi Adityanath has also raised the issue several times. The construction of the temple, if pursued, will naturally lead to conflict and violence in the state. The situation may be curbed by inciting fear for some time, but in the long run it may even lead to terrorism.

The clear majority of the BJP in UP has placed the party in a commanding position for 2019 under Modi’s leadership. To combat it, the opposition parties will unite and lead a movement which is likely to result in a confrontation. Democratic rights might be systematically or constitutionally crushed in the process. In order to crush various movements, different organisations of the Sangh can create conflicts the way they did in Kerala, Jawaharlal Nehru University and Delhi University. Such vigilantist conflict is more dangerous than government suppression. The government may try to regulate the situation through the local administration, but the disheartened opposition will take to the streets. Other deprived sections of society will follow a similar pattern.

Because electoral politics creates a path towards stability in democracy but does not solve all the problems, Modi and the Sangh will hasten to implement their respective agendas of economic nationalism and cultural nationalism. This will prove disastrous to democracy and the constitution. It is likely that constitutional institutions like the Supreme Court or the citizens will oppose this, but their voices will not affect the Sangh. In a situation like this, the country will move towards an era of conflicts like that of Indira Gandhi in the 1970s and 1980s. Therefore, while the prospect of development in Uttar Pradesh evokes hope, the danger of a similar conflict looms before us.

The author is a senior journalist

Translated from Hindi by Naushin Rahman. To read the original article on The Wire in Hindi, click here.