The party has asked its Delhi legislators for suggestions on which department or minister they would like to shadow. 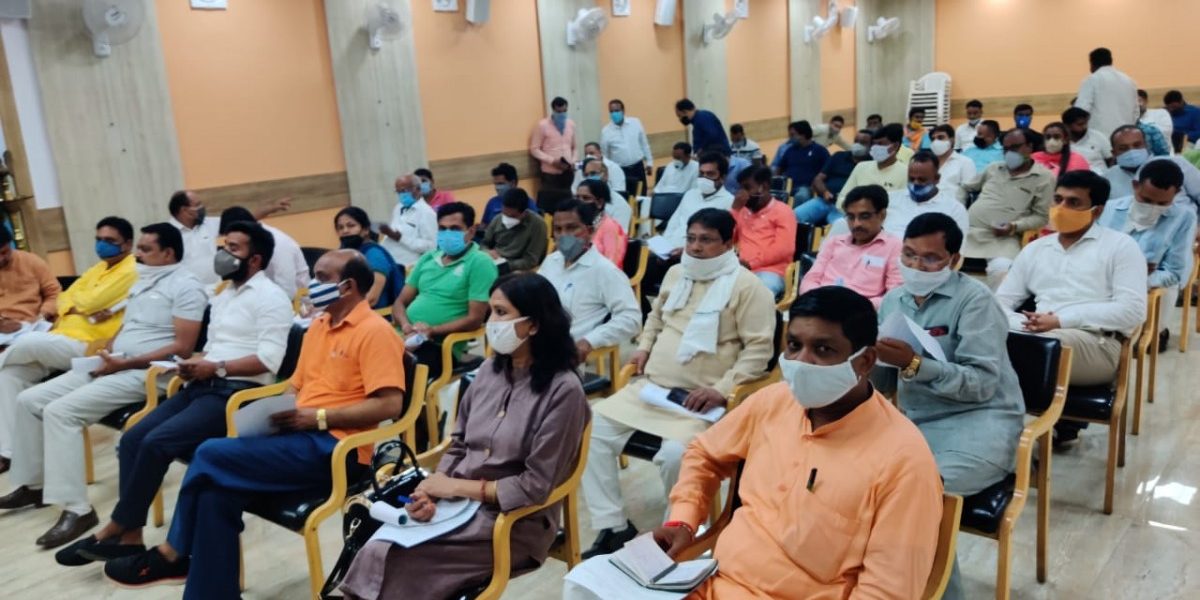 Representative image of a meeting among party members at the BJP Delhi offices. Photo: Twitter/@siddharthanbjp

New Delhi: The Delhi unit of Bharatiya Janata Party is contemplating a ‘shadow cabinet’, which is a feature of the Westminster system of governance, to track and monitor the functioning of all ministers of the Arvind Kejriwal-led Aam Aadmi Party government in Delhi.

The party unit, which got a new president in Adesh Gupta in June this year, is in the process of announcing the names of new office-bearers for various posts. A week ago, it appointed new presidents to all the 14 district units.

Now the party has decided to form a shadow cabinet to utilise the services of its MLAs. Legislators have been asked for their opinions on the subject. They have also been asked to disclose which departments or ministers they would like to monitor.

The proposal is expected to be taken up for discussion after two weeks by senior Delhi BJP leaders, including state unit president Gupta and national vice-president and in-charge of the Delhi unit, Shyam Jaju.

‘A step towards decentralisation of work’

Leader of Opposition in Delhi Assembly and BJP MLA Ramvir Singh Bidhuri said, “It was felt that this would give all the MLAs an important task to perform. They would be encouraged to make their own enquiries, engage with people and officials, identify issues related to people and the problems being faced by them.”

He added that the BJP believes that “decentralisation of work is very important” for bringing the best out of legislators. “This initiative will be a kind of responsibility that would be entrusted to legislators and then we will see how they perform.”

Also, since BJP has eight MLAs in Delhi, apart from the Leader of the Opposition, that would leave seven of them to track the various departments under the seven ministers in the Delhi Cabinet.

The BJP wants to identify areas of weakness in the ruling government. Not only had AAP won the 2015 Delhi Assembly elections handsomely by winning a record 67 of the 70 seats, it had almost repeated its performance in the polls earlier this year, by bagging 62 seats.

With Congress relegated to a distant third position, having witnessed a sharp drop in its vote share, BJP clearly feels it needs to identify faults in the working of the AAP government in order to regain its hold in Delhi.

The concept of ‘shadow cabinet’ comes from the Westminster system followed in the United Kingdom, several Commonwealth states and other countries.

The UK parliament site describes a shadow cabinet as a “team of senior spokespeople chosen by the Leader of the Opposition to mirror the Cabinet in Government. Each member of the shadow cabinet is appointed to lead on a specific policy area for their party and to question and challenge their counterpart in the Cabinet.”

In British parliamentary practice, the opposition shadow cabinet comprises senior members who are each given a minister to shadow and they study their working, develop alternative policies and hold them to account for their actions and responses.

The practice of having Shadow Ministers is also followed in several other countries, including New Zealand, France, South Africa and Canada.

BJP-Shiv Sena tried it in Maharashtra in 2005

In India, BJP had also experimented with this concept in 2005, and formed a shadow cabinet with the Shiv Sena in Maharashtra to keep a close eye on the functioning of the then Vilasrao Deshmukh-led Congress-NCP government in the state.

The Congress too tried its hand at this concept in Madhya Pradesh in 2015. It formed a shadow cabinet to counter the BJP government led by Shivraj Singh Chouhan, who was in his third term as chief minister then.

Apart from political parties, civil society groups and non-governmental organisations too have formed shadow cabinets in the past. While an NGO, Gen Next, had done one such experiment in Goa in 2015, some civil society members announced a similar initiative in Kerala in April 2018 to analyse the functioning of the Pinarayi Vijayan-led Left Democratic Front government in the state.