The former bureaucrat had joined the BJP on Thursday. Speculation suggests he could be inducted into the cabinet. 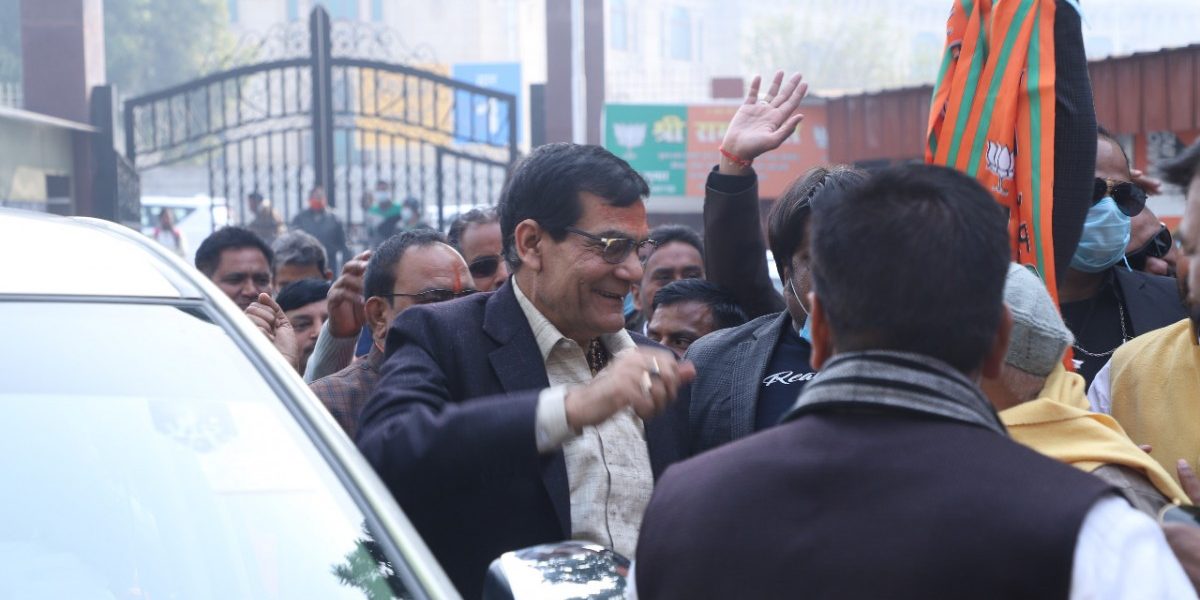 Lucknow: Former IAS officer A.K. Sharma was named a BJP candidate for the Uttar Pradesh legislative council polls on Friday, a day after he joined the party, fuelling speculation that he will get a ministerial post soon.

Sharma, however, parried questions when asked to comment on the speculation.

“Whatever responsibility the BJP gives me, I will discharge with full honesty,” he told PTI.

During a late-evening informal interaction with mediapersons at his official residence here, chief minister Yogi Adityanath too remained non-committal on the issue.

He just said, “Uttar Pradesh will get help from his (Sharma’s) experience.”

Adityanath evaded a reply when asked whether there was a possibility of any imminent expansion of his council of ministers or more specifically, whether Sharma could be made the deputy chief minister, as is being widely speculated in political circles.

Sharma earlier tweeted that he was ‘grateful and thankful’ that the BJP declared him as the party’s candidate for biennial elections to the UP Legislative Council.

Sharma, who has long been one of the trusted bureaucrats of Prime Minister Narendra Modi since his tenure as the Gujarat chief minister, joined the Bharatiya Janata Party (BJP) on Thursday, days after he opted for voluntary retirement from service.

He has served in key positions in the PMO after Modi became the prime minister in 2014.

In another tweet, the 1988-batch IAS officer said: “Village born person who struggled to make it to IAS! Making me leave GOI’s Secretary post before two years of retirement and making me join world’s biggest party with full honour. Only Narendra Modi and BJP can do it. Grateful.”

The terms of Dinesh Sharma, Singh, and Acharya in the state’s upper house come to an end on January 30. The former IAS officer is the only new face in the party’s first list of candidates that was released on Friday.

Polling for 12 legislative council seats in Uttar Pradesh will be held on January 28 and the ruling party can win 10 seats, going by its brute majority in the 403-member assembly.

BJP circles speculate that Sharma might join the government, though there is no official word. The state unit of the party kept a guarded silence over the future role of Sharma, whose closeness to Modi has added grist to the rumour mill.

Observers pointed out that there is precedence of top bureaucrats joining the government at the Centre such as external affairs minister S. Jaishankar and civil aviation minister Hardeep Singh Puri.

Known for delivering time-bound results, Sharma earned Modi’s trust as the secretary in his CMO and by successfully handling the Vibrant Gujarat campaign to get investments to the state.

He was handling the affairs of the MSME (micro, small and medium enterprises) ministry, a crucial department working on the prime minister’s plan for the revival of the economy following the coronavirus-triggered lockdown.

A Bhumihar by caste, Sharma went to school in Mau district of eastern Uttar Pradesh. He received a post-graduate degree from the Allahabad University.