BJP Suffers a Big Jolt in Bypolls as Congress Wins in Rajasthan, TMC in West Bengal 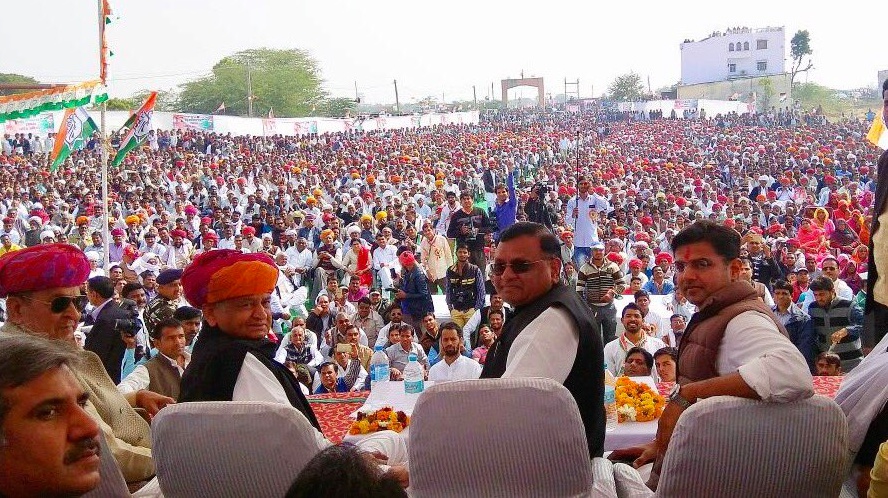 The Bharatiya Janata Party suffered a major blow to its aspirations of putting up a good showing once again in Rajasthan in the next assembly and Lok Sabha elections. The party, which heads the state government led by Vasundhara Raje, lost the by-elections to both the Lok Sabha seats in Alwar and Ajmer, and the Mandalgarh assembly seat, to a resurgent Congress.

Even in West Bengal, where BJP was hoping to upset the applecart of the ruling Trinamool Congress (TMC) in the by-election to the Uluberia Lok Sabha constituency and Noapara assembly constituency, the saffron party only managed to finish second to TMC, whose candidates won with comfortable margins.

The loss in the two Lok Sabha seats in Rajasthan is a big setback to the BJP considering these were won with significant margins by the party in 2014, when Narendra Modi had led the party to power at the centre.

As for the Mandalgarh assembly seat, though the party candidate was initially leading here, he later fell behind the Congress candidate by a large margin and lost. All three seats had fallen vacant after the death of their BJP representatives.

Will the results trigger a rethink on simultaneous polls?

At a time when some political experts believe that the Modi government could advance the general elections to have them coincide with the scheduled assembly elections to the big states of Rajasthan, Madhya Pradesh, Chhattisgarh and Mizoram, to do away with anti-incumbency which his party governments may face in these states, the results of the by-polls would have come as a shocker to the BJP.

In Rajasthan, the elections were fought in the backdrop of the Padmavaat controversy which had enraged the Rajput community, which had accused the BJP of not doing enough to stall the release of the movie.

In Ajmer, where the community has about two lakh members, Raghu Sharma of the Congress defeated former Union minister Sanwarlal’s son Ramswaroop Lamba of the BJP by 84,414 votes. In the 2014 Lok Sabha polls, BJP had won this seat by nearly 1.72 lakh votes so its loss of support has been amplified by this result.

In fact, in both these constituencies, the Congress candidates had established strong leads right from the initial rounds of the counting, triggering celebration in state party offices.

In the Mandalgarh assembly by-election, Vivek Dhakad of the Congress defeated Shakti Singh Hada of the BJP by 12,976 votes. While Dhakar polled a total of 70,146 votes, Hada managed only 57,170.

Former Rajasthan chief minister Ashok Gehlot was quick to react to the development and noted that “today’s trends can be seen as precursor to not just state assembly polls later this year but also next Lok Sabha polls.” He added to good measure that “the Vasundhara Raje government hasn’t done anything the past four years.”

‘A rejection of politics of polarisation’

Rajasthan Congress president Sachin Pilot, who has been instrumental in reviving the party in the state, said the “trends show that the people have given their blessings to the Congress and have rejected the Vasundhara Raje government and its policies.” In a comment on the divisive politics being played by the right wing groups, he also noted that “young people have realised that the politics of polarisation doesn’t work.”

For Pilot, the win in Ajmer was extra special since in 2014, it was he who had lost the election from here to Sanwarlal Jat, who passed away last year. The election in Alwar was necessitated by the death of MP Mahant Chand Nath Yogi, while the passing away of Mandalgarh legislator Kirti Kumari forced the election there.

Incidentally, under Pilot, the Congress has also won a majority of seats in the by-elections to zila parishads, panchayat samitis and municipal wards in Rajasthan.

In West Bengal, Mamata Banerjee’s Trinamool Congress once again upset the BJP calculations and romped home easily in both the bypolls.

In the Uluberia Lok Sabha constituency, TMC candidate Sajda Ahmed defeated Anupam Mallick of the BJP by 4,74,023 votes to retain the seat for the party. While Ahmed polled 76,7219 votes, Mallick got 293,018. The Communist Party of India (Marxist) candidate was pushed to the third spot and polled 1,38,792 votes.

The result was more or less similar in Noapara assembly constituency, where TMC won by a huge margin. Only here the party wrested the seat from the Congress which had allied with the Left in the last assembly elections and bagged this seat. TMC candidate Sunil Singh won by a margin of 63,018 as he polled nearly 54% of all the votes cast. The BJP candidate came second with 38,711 votes, while the CPI(M) candidate was slightly behind at third spot with 35,497 votes. Congress came fourth with 10,527 votes.

The election results of West Bengal assume significance since they show BJP to be gradually moving ahead but repeatedly falling well short of TMC’s numbers. This could have a major bearing on BJP national president Amit Shah’s dream of bagging at least half the seats in the state in the next Lok Sabha polls.