Former MP Dinubhai Boghabhai Solanki is the prime accused in the 2010 murder of Amit Jethwa, whose family is still fighting for justice. 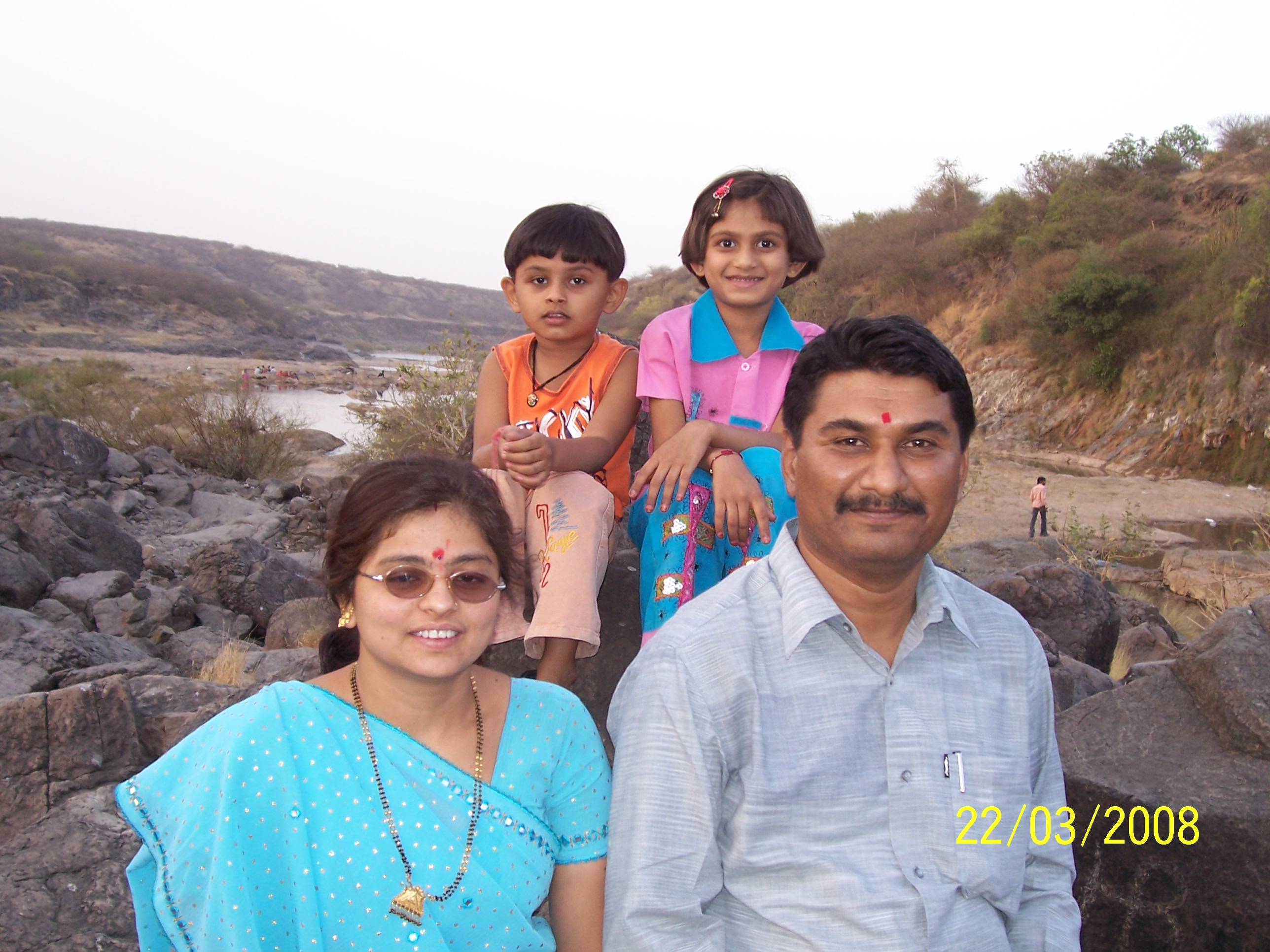 File photo of Amit Jethwa with his wife and children. Courtesy: Damayantee Dhar

Amreli, Gujarat: Khamba, a small village on the edge of Amreli district in the Saurashtra region of Gujarat, is where 62-year-old Bhikhabhai Jethwa lives alone. His four children were born, raised and married from here, the house Bhikhabhai still lives in. A happy, middle-class joint family lived in the house together until Amit Jethwa, Bhikhabhai’s eldest son and the sole earner of the family, was murdered in 2010.

Amit, a prominent environmental and RTI activist, was shot dead on July 20, 2010 in front of the Ahmedabad high court. He had been seeking information using the RTI on the illegal mining of limestone in the Gir region of Gir Somnath district, which had continued unabated despite prohibition orders from the government. In the process, Amit came to confront Dinubhai Boghabhai Solanki, a BJP leader and former MLA from the Kodinar assembly seat, and then MP from the Junagadh Lok Sabha constituency. Solanki had allegedly been involved the illegal mining of limestone in the area.

Amit had filed a PIL petition naming Solanki as one of the many involved in the illegal mining months before he was shot dead. 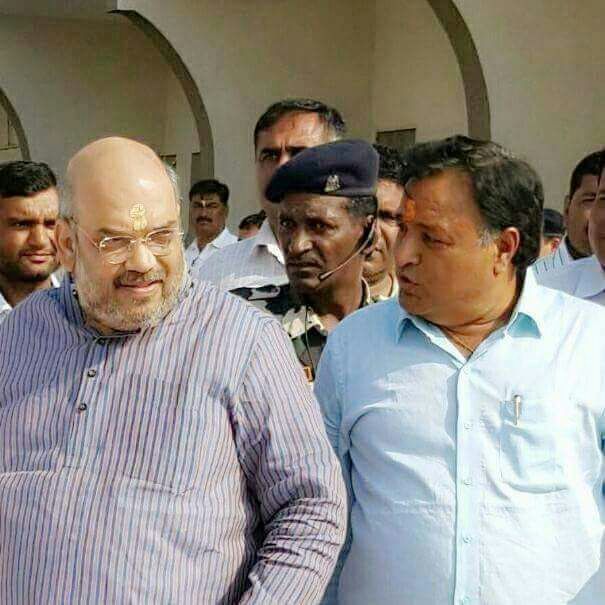 On October 30 this year, the Supreme Court cancelled Solanki’s bail until the examination of eight key eye witnesses takes pace. During the course of the case, 105 of 195 witnessed turned hostile.

“The bail of the accused shall remain cancelled until the examination of eight key witnesses in the case. The trial shall be held on a day-to-day basis and the accused (Solanki) will not enter Gujarat unless required in the case,” held the bench of Justices A.K. Sikri and Ashok Bhushan.

The Supreme Court also allowed the re-examination of 26 other witnesses in the case and ordered Solanki to surrender immediately. The order from the apex court comes after Solanki had challenged a high court order that had allowed a retrial in the case. 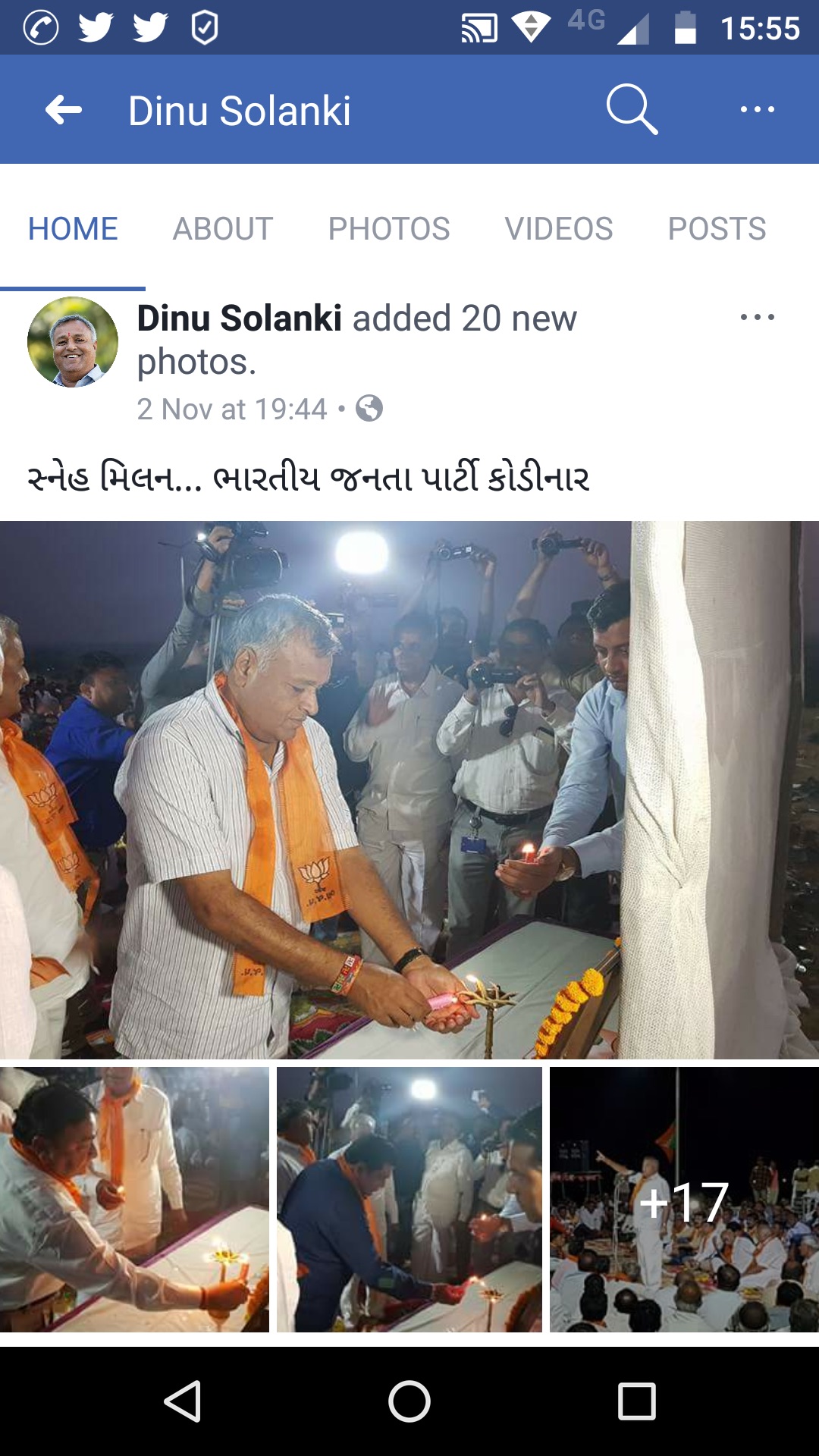 Solanki shared images of himself at a BJP event on November 2, two days after he was asked to surrender. Credit: Facebook screenshot

However, despite Supreme Court’s order, Solanki has not surrendered yet. The BJP leader has in fact been attending political meetings of the party in Kodinar ahead of the upcoming polls and even posted photos of himself attending the ‘Sneh Sammelan’, a political programme of the BJP, on his Facebook on November 2.

“The case is being handled by officers at the CBI headquarters as of now and we (the CBI office in Gandhinagar) have not received any orders from Delhi,” said Mukhesh Sharma, DySP, CBI, Gandhinagar and the investigating officer in the case.

“Bhikhabhai Jethwa, father of Amit Jethwa, has affirmed the affidavit and an application has been sent requesting immediate arrest and permanent cancellation of bail of Solanki owing to the non-compliance of order by Supreme Court and contempt of court by Solanki by failing to surrender,” stated Anand Yagnik, Bhikhabhai’s lawyer.

Amit’s family as well as Yagnik have been receiving multiple threats for pursuing the case. While Amit’s family (his mother, two brothers, a sister, wife and children) have had to leave their home in Khamba to live at different places both to earn a living and for their safety, a resilient Bhikhubhai decided to stay in the village home alone and fight for justice.

“I am not scared. He was my son, if he was so fearless, how can I, his father be scared,” Bhikhubhai told The Wire.

Amit was a pharmacist by profession, and after finishing his bachelors in pharmacy from a college in Rajkot, he managed to get a government job.

“During his posting in Khamba, he found the government pharmacist was selling medicines privately, which Amit objected to. Following that, he was transferred to Kutch first and then to a district on the Maharashtra-Gujarat border. Later, he decided to quit in 2007 and become a full-time activist,” said Bhikhabhai.

“Amit was always a fighter,” he added.

After Amit’s murder, his family has been receiving threats and is under pressure to withdraw the case.

“I received around a dozen threats just after he died, warning me to not file a complaint. My wife was threatened and my son-in-law was attacked. They have even tried to lure me with money. The most recent threat I have received was after the high court ordered a reinvestigation in the case,” Bhikhabhai said.

Amit was the president of Gir Nature Youth Club at Khamba. He was involved in high-profile cases like the one against Salman Khan for shooting a Chinkara, an endangered deer, and highlighting the use of Chinkara in the movie Lagaan. He opposed the Bhuj court decision that had stayed an inquiry against Aamir Khan.

In 2007, he exposed the mysterious deaths of lions in Gir forest, which led to uncovering a big lion-poaching gang. In the same year, Amit contested the assembly election against Solanki from Kodinar, but Solanki won. In 2008, Amit began seeking information through the RTI regarding illegal limestone mining. He filed six requests seeking information on activities of the illegal mining lobby functioning in the protected forest area outside Gir Forest National Park. In the same year, he was brutally attacked and had to be hospitalised for three months with grievous injuries. 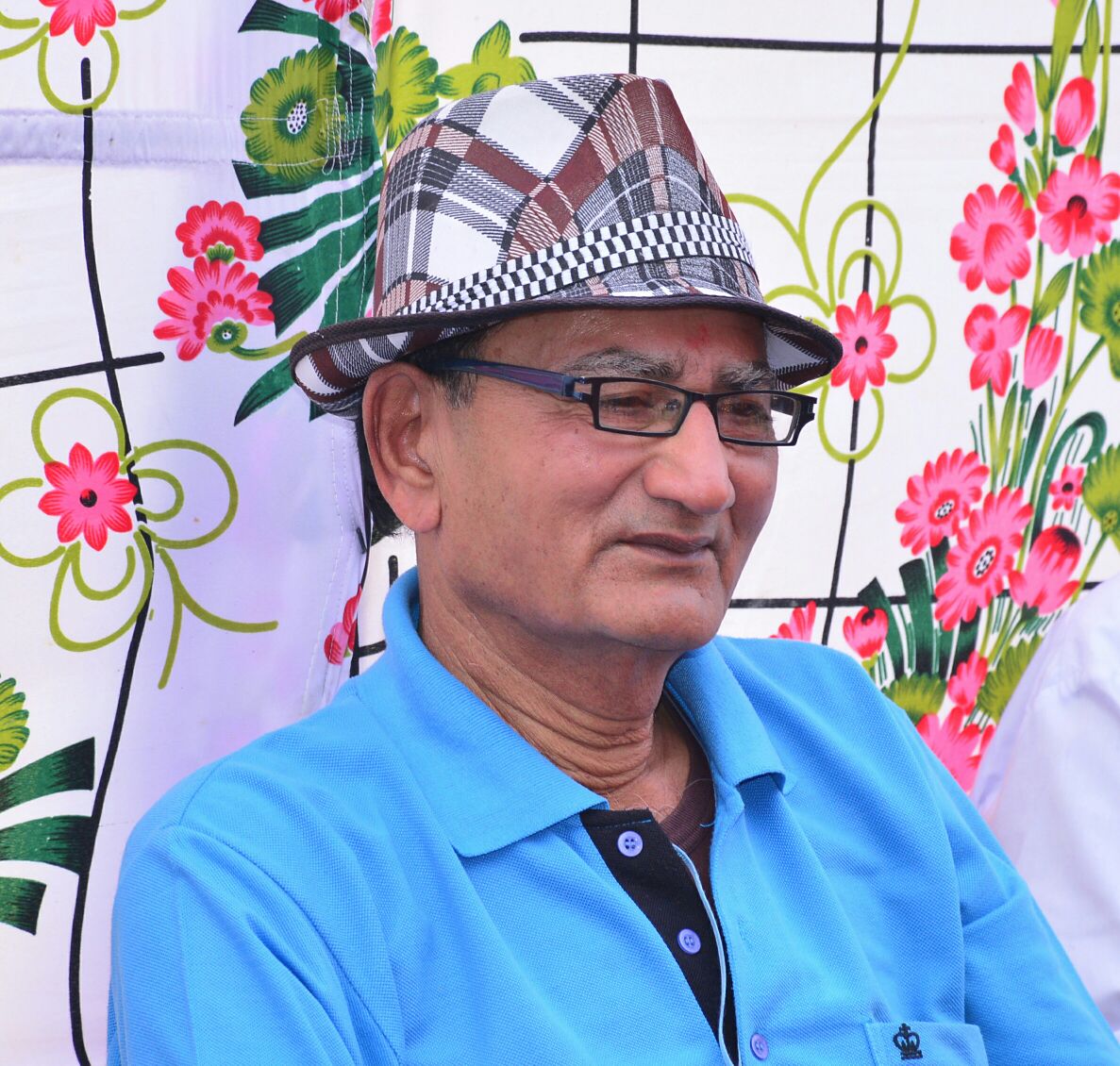 Following the attack, Amit, his wife and two children left Khamba and shifted to Ahmedabad. In the year 2010, he filed a PIL petition on the basis of evidence found through RTIs and named Solanki in it.

“It had been couple of months after he had filed the PIL. He visited me in my office on the high court premises and said that he was being followed for about seven days and getting threats from Solanki and his men. Twenty four hours later, he was shot twice from a point blank range in front of the high court of Gujarat. He was declared dead on the spot. The contract killer who shot Amit was identified as Sailesh Pandya,” Yagnik told The Wire.

The police did not wait for the family to file an FIR. They filed one on their own saying that ‘someone’ had killed Amit.

“Later, an investigation was initiated and the statements of [Amit] Jethwa’s father, wife and others from Gir Nature Youth Club were recorded, all of whom stated that Jethwa was facing life threats from Solanki and his nephew Shiva Solanki and that he had been worried about his safety in the last few months of his life. However, the Ahmedabad police, the first investigating agency in the matter, omitted the part of the statements where they had talked about Solanki,” he added.

After a lull of about three months, the case was transferred to CID Crime and within a day of the transfer, CID Crime had arrested a few persons, all of whom confessed to the crime, exonerating Solanki and his nephew.

“That is when I filed an application in the high court in September 2010, requesting that the case be transferred to the CBI. The court observed that the investigation has been perfunctory and biased only to protect Solanki and transferred the case to the CBI in October 2012,” said Yagnik.

The CBI took over the investigation in November 2012. Meanwhile, Solanki had challenged the transfer order in the Supreme Court, stating that it was uncalled for. His application to stay the high court’s order was rejected by the apex court. The CBI completed its investigation and arrested Solanki on November 5, 2013. On February 24, 2014 the Supreme Court rejected a special leave petition by Solanki but granted him interim bail. A chargesheet was also filed around the same time against Solanki by the CBI, naming him as the main conspirator along with his nephew and others. The chargesheet also stated that in the process, Solanki also sought help of some on duty police personnel and absconding criminals. 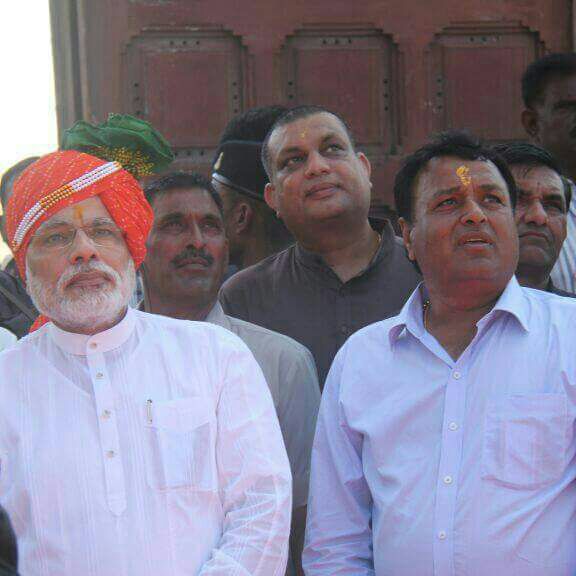 “Jethwa was a physically strong man. Despite being shot twice, he got hold of the two bike-borne men who shot him and in the scuffle, the assailants had left behind their gun and other personal belongings. The police could have immediately found out who the persons were from the gun, licence plate or other belongings, but did not,” Yagnik said.

At the time when Bhikhubhai initiated a case against Solanki, the former MP already had 47 FIRs against him. Despite being granted bail on condition of not indulging in intimidation, Solanki’s nephew Shiva and his men allegedly attacked Mahesh Makwana, another RTI activist, in Kodinar in December 2016. Makwana suffered nine fractures and remained bedridden for several months.

Over the last few years, the Jethwa family left Khamba to earn a livelihood and ensure their security.

“Our father was rendered semi paralysed due to cervical and lumbar spondylitis and Amit had taken responsibility of the entire family and kept the family together in difficult times. A lot has changed since his death. Amit had been the sole earner of the family, the eldest son and a father figure to the rest of us. His demise had left the family mentally and financially broken,” said Jignesh Jethwa, Amit’s younger brother.

“It was a Tuesday, about 8:45 pm, when we received the news of his demise that day. Our mother was affected the most, till this day she doesn’t eat anything on Tuesdays,” he added.

After Amit was murdered, the family has been living in fear. It is only their father who remains undaunted, said Jignesh.

“This fight will continue till I get justice,” Bhikhabhai told The Wire.