The chief minister is today the undisputed leader of the desert state and there is currently no one to match her political stature.

The chief minister is today the undisputed leader of the desert state and there is currently no one to match her political stature. 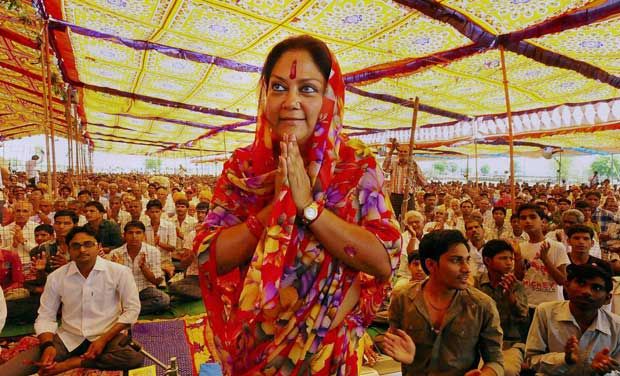 Jaipur: The BJP reinforced its political might and chief minister Vasundhara Raje her unequivocal position in the desert state of Rajasthan on Thursday (April 13) with its candidate Shobha Rani winning the Dholpur assembly seat by a huge margin of 38,648 votes.

The Dholpur by-poll was necessitated after the Bahujan Samaj Party MLA B. L. Kushwah was sentenced to life imprisonment by a court in connection with a murder case of 2002. Rajasthan assembly speaker Kailash Meghwal terminated Kushwah’s membership from the house on December 13.

The by-poll, held on April 9, had become a prestige issue for both the BJP and Congress as each had a different motive for winning the poll.

The party’s pain of continuously losing and securing just 21 seats in the 2013 assembly polls may have somewhat been eased if the Congress could have managed to win Dholpur. The party’s urgency for winning the seat is easy to decipher, according to political observers.

However, what surprised many was the BJP’s immense power push for this by-poll.

Firstly, BJP’s choice of candidate for the seat surprised many. The party found no other eligible candidate from amongst its hardworking cadres in Dholpur and had to fall back on MLA Kushwah’s wife Shobha Rani to work the winning formula for them. She had joined the BJP just before the polls.

Along with her husband, Shobha Rani is also said to be an accused in a chit-fund fraud case filed against their financial company. There are complaints of the company having cheated innocent investors by promising high returns on fixed and recurring deposits.

After the win today, the BJP leaders, including several of its women leaders, were heard singing praises for Raje as she had chosen to field Shobha Rani and have faith in her despite her “being a housewife till now,” thus encouraging women empowerment.

Outwardly, the BJP has harped on development and an advanced roadmap for Dholpur and approached people with various welfare schemes and benefits. But the actual story is that the BJP worked the caste arithmetics in its favour. By fielding Shobha Rani, they had more than 25,042 of Kushwah’s votes in their favour along with sympathy votes as her husband was in jail, although the Congress alleged that Kushwah was heading the campaign from either jail or hospital, whichever suited him.

Moreover, with Dholpur being on the eastern borders along Uttar Pradesh, it could not have escaped the tremendous BJP wave in the neighbouring state. They reached out to all communities, including the Muslims, who promised their support even in the midst of controversy around the killing of an Alwar dairy farmer.

BJP also had an advantage vis-a-vis the Congress candidate, the 75-year-old Banwari Lal Sharma, who despite being a former minister and a five-time MLA, wasn’t able to secure the confidence of voters. Congress only banked upon its state chief Sachin Pilot’s charisma and dynamism, who went out of his way, meeting and campaigning door-to-door. He also targeted the Brahmin (24528 votes), Jatav (22728), Muslim and Lodha (15000 votes each) votes, which accounted for more than 77,000 votes. But that didn’t prove to be enough.

Poll experts say that Raje simply could not afford to lose this time. In September 2014, just after her stupendous victory in December 2013 when she had won 162 seats out of 200, BJP had lost three out of the four by-polls, handing the win to Congress on a platter.

Raje’s complacency then had become a point of discussion and criticism. So this time around, Raje monitored the election herself, staying put in Dholpur even after the campaign ended. Although she deployed all her senior ministers to reach out to the people, she did not place her full trust in them, so she stayed on her home turf.

Moreover, after BJP’s emphatic win in Uttar Pradesh, part of which was credited to Om Mathur, a senior leader and Rajya Sabha member from Rajasthan, Raje had to prove her magic touch again to outwit any of her probable competitors. It was as if Raje was contesting the seat herself.

She could not afford to miss this chance, as presumably, Prime Minister Narendra Modi and his right-hand man Amit Shah, were keeping a close watch on all states, including Rajasthan.

With this win, Raje’s grip on the state is going to grow stronger. She has become the undisputed leader of the desert state that presently has no one to match her stature.

Although controversies have dogged her in the past three years, including her endorsement of IPL chief Lalit Modi’s UK immigration application, the death of more than 500 cows at Hingoniya gaushala and the recent death and harassment of minorities in her state, her political hold on the state continues to be firm and steady.

In her first stint from 2003-2008, Raje is said to have become inaccessible, arrogant and have had a love-hate relation with the RSS. She has presumably learnt from her mistakes, and this time has been cosying up to all sections including the RSS, with many of her ministers having a staunch RSS background.

Meanwhile, the loss of the Congress is symbolic of its weakening position in the state. Pilot, who worked hard on the ground, perhaps was not able to energise its cadres to the extent of BJP, whose cadres work relentlessly. Other senior Congress leaders also stayed away from the campaign trail, signifying an intra-party dispute.

Pilot’s reputation as the state chief is likely to take a blow. Although he is said to be close to Rahul Gandhi, the Congress’s sinking ship in the state is not going to help him in the long run.

Under presser after the dismal loss, Pilot said, “We haven’t lost to BJP but to the Rajasthan government.” But crying hoarse about misuse of power and government machinery for winning the elections will not be enough for Pilot. Political observers say that despite all such complaints, Pilot needs to show results.

Till then, he will have to be off pagdi and garlands – the traditional form of welcome in Rajasthan – as he had vowed not to wear them until he revives the sagging fortunes of the party in the state. Meanwhile, all the bouquets are ready for Raje.