As the BJP's Ambitions Grow, Is the NDA Almost Dead?

The recent cabinet reshuffle has exposed the fault lines within the ruling alliance. With the BJP now calling all the shots and its allies increasingly sidelined, does this sound the death knell for the NDA? 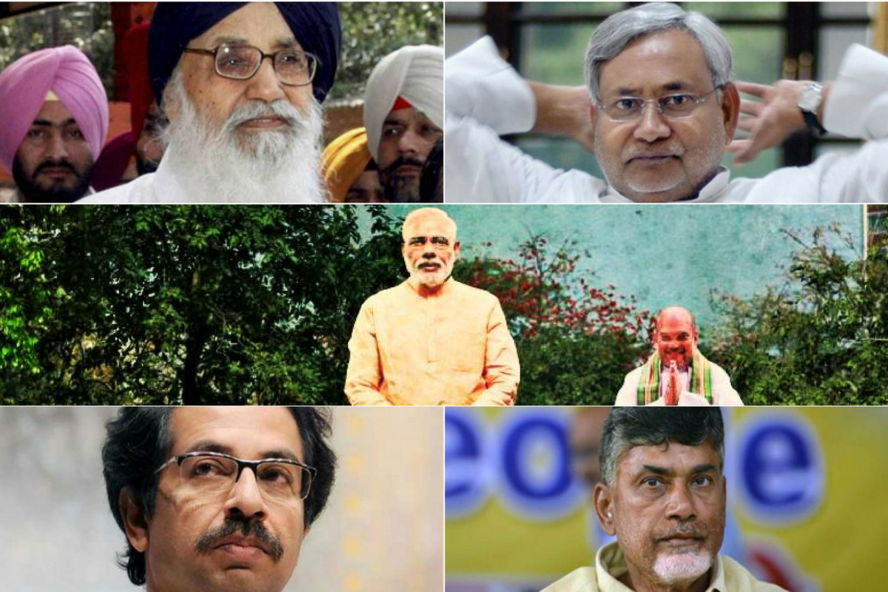 Is it goodbye to the NDA allies? Credit: Reuters/PTI

With the time fast approaching to see if BJP president Amit Shah’s target for the BJP to secure 350 seats on its own in the next Lok Sabha polls pans out, talk of the ‘end of the NDA’ has begun in political circles.

Questions like ‘is the NDA dead?’ have also been raised after the recent Union cabinet reshuffle led to talk of  a ‘Team Modi’ to face the 2019 Lok Sabha polls.

One thing appears certain, the non-BJP constituents in the NDA have become ‘secondary citizens’, with the ruling dispensation becoming a ‘sab kuch Modi’ affair.

But BJP managers appear to have ensured that the allies do not cause much trouble or get much focus. Unlike the NDA led by Atal Bihari Vajpayee, the ruling alliance headed by Prime Minister Narendra Modi does not have a convenor. In Vajpayee’s time, George Fernandes of the Samata Party was the convenor and was powerful enough to have a say in several political matters. Besides, being Vajpayee’s defence minister, Fernandes was in the key committees of the Union cabinet.

In Modi’s cabinet, however, BJP members are in all key seats of power, not surprising given the the nature of the mandate secured by Modi in 2014. The NDA allies have been relegated to the backseat, either willingly or by force.

Perhaps the exclusion of non-BJP NDA constituents in the new cabinet stemmed from the ‘mood of the nation’ surveys, which seem to say ‘there is only Modi’ after the 2019 general elections.

How much these surveys are based on the pulse of the people only time will tell, but the ‘all BJP exercise’ undertaken by Modi and Shah shows they are confident of carrying the day on their own in the coming Lok Sabha polls.

A fortnight before the third reshuffle of the Modi cabinet, a small but significant development occurred in faraway Pune.

Raju Shetty, MP and president of the Swabhimani Shetkari Sanghtana (SSS), a constitutent of the NDA, announced the withdrawal of his outfit from the ruling alliance at the Centre as well as an end to its support to the Devendra Fadnavis government in Maharashtra.

Though the announcement of a sulking Shetty did not get much traction in a large large section of the media engrossed in Modi, the development is not without significance.

Although a small party, that the SSS is the first NDA constitutent to part ways with the ruling dispensation at the Centre, that too on the issue of farmers, is telling.

Incidentally, during the last parliament session, Shetty was at the forefront to target the Shivraj Singh Chauhan government in Madhya Pradesh over the police firing at Mandsaur on farmers. He has also been critical of the Maharashtra government and the Centre over their stance towards farmers.

Meanwhile, although Bihar chief minister and recent NDA-returnee Nitish Kumar may publicly deny any heartache, the cabinet reshuffle was  a jolt. The Janata Dal United (JDU) leader, who not too long ago was seen as the opposition’s challenger for the prime ministerial post, has been shown his place by Modi who did not accommodate any of JDU leaders in his cabinet. If the talk in political circles is to be believed, Nitish’s demand for more representatives from his party at the Centre led to the JDU being excluded entirely.

RJD supremo Lalu Prasad, Nitish’s friend-turned-foe, hit the nail on the head, remarking that it was hard for Modi and the BJP to have faith in Nitish after what he had done in Bihar.

Similar has been the fate of Telugu Desam Party (TDP) supremo and Andhra Pradesh chief minister N. Chandrababu Naidu. Naidu and the TDP were hoping to secure one more cabinet berth and two minister of state positions after the party’s good showing in the prestigious Nandyal bypoll, in which it trounced the candidate from the YSR Congress Party (YSRCP). Modi had met YSRCP leader N. Jagan Mohan Reddy sometime back when the latter had extended his party’s support to NDA presidential candidate Ram Nath Kovind. The meeting had upset the TDP. During Vajpayee’s NDA regime, Naidu was the most powerful ally of the BJP, and the government, heavily dependent on the support of 27 TDP MPs in the Lok Sabha, always kept him in good humour.

Despite being an old ally of the BJP, the Shiromani Akali Dal has remained an ‘also ran’ in the NDA after the party lost power in Punjab early this year. The Parkash Singh Badal-led party is being seen more as a liability for the BJP for a while now, with some in the party advocating that it go it alone in Punjab.

An interesting aspect of the cabinet reshuffle was that Modi sought to widen the BJP’s social and political base. By inducting a Christian (K.J. Alphons) from Kerala, one more Sikh (Hardeep Puri) to send a message to Punjab, and elevating a Muslim (Mukhtar Abbas Naqvi) to cabinet rank, the BJP appears to be sending a message – that it wants the optics of ‘sab ka saath, sab ka vikas‘. Politically, the idea is to project the BJP as a departmental store where all things are available for all customers who need not go to multiple kirana (retail) shops (regional parties).

The worst treatment has undoubtedly been meted out to the Shiv Sena, the BJP’s oldest ideological ally and which was its senior partner in Maharashtra for over two decades till the emergence of Modi on the national scene.

The Sena is the second largest constituent of the NDA, with 18 MPs in the Lok Sabha, but has lost clout after the BJP won 282 seats on its own, giving it an absolute majority in the 2014 general poll. The lack of chemistry between Modi and Sena chief Uddhav Thackeray is evident.

In fact, the NDA arrangement had started coming unstuck in October 2014 itself. Within four months of the Modi government coming to power, the BJP contested the assembly elections in Maharashtra on its own, parting ways with the Sena, which had been its ‘elder brother’ in the state for long.

Now, the BJP has been making it known that it is toying with the idea of contesting all the 48 Lok Sabha seats from Maharashtra, signalling that there is no love lost between it and the Sena.

The Sena, on its part, has turned into a strong critic of the BJP and Modi in the ruling alliance, but is unable to fashion a strategy to regain its lost space. It remains part of the NDA at the Centre and the Fadnavis government in Maharashtra, and has been unable to do much to gain strength even as the BJP posts good showings in successive polls.

The BJP’s message to NDA allies is loud and clear – they are ‘secondary citizens’ in the ruling alliance and will be there only on the BJP’s terms.

The remark by Sanjay Raut, the Shiv Sena’s leader in the Rajya Sabha, that the NDA is “almost dead” and that the BJP remembers the Sena only when it needs some support, showed the growing bitterness among the allies.

A faint silver lining for the allies is that the BJP does not have a majority in the Rajya Sabha and is forced to seek their support in the passage of key bills.

The winter session of parliament, which generally starts in November, is expected to show how frosty ties between the allies and the BJP are, and whether the NDA is on its deathbed. Of course, the BJP has been quite adept at securing support from non-NDA, non-UPA parties in the upper house.

The NDA is at the crossroads as Modi wants to have absolute power again and nothing less.

But even though the NDA is not in ship shape, the opposition Congress’s UPA is no better. With about 20 months to go until the next Lok Sabha election, the grand old party continues to face a lack of ideas, innovation and narrative to lead any credible fight back.