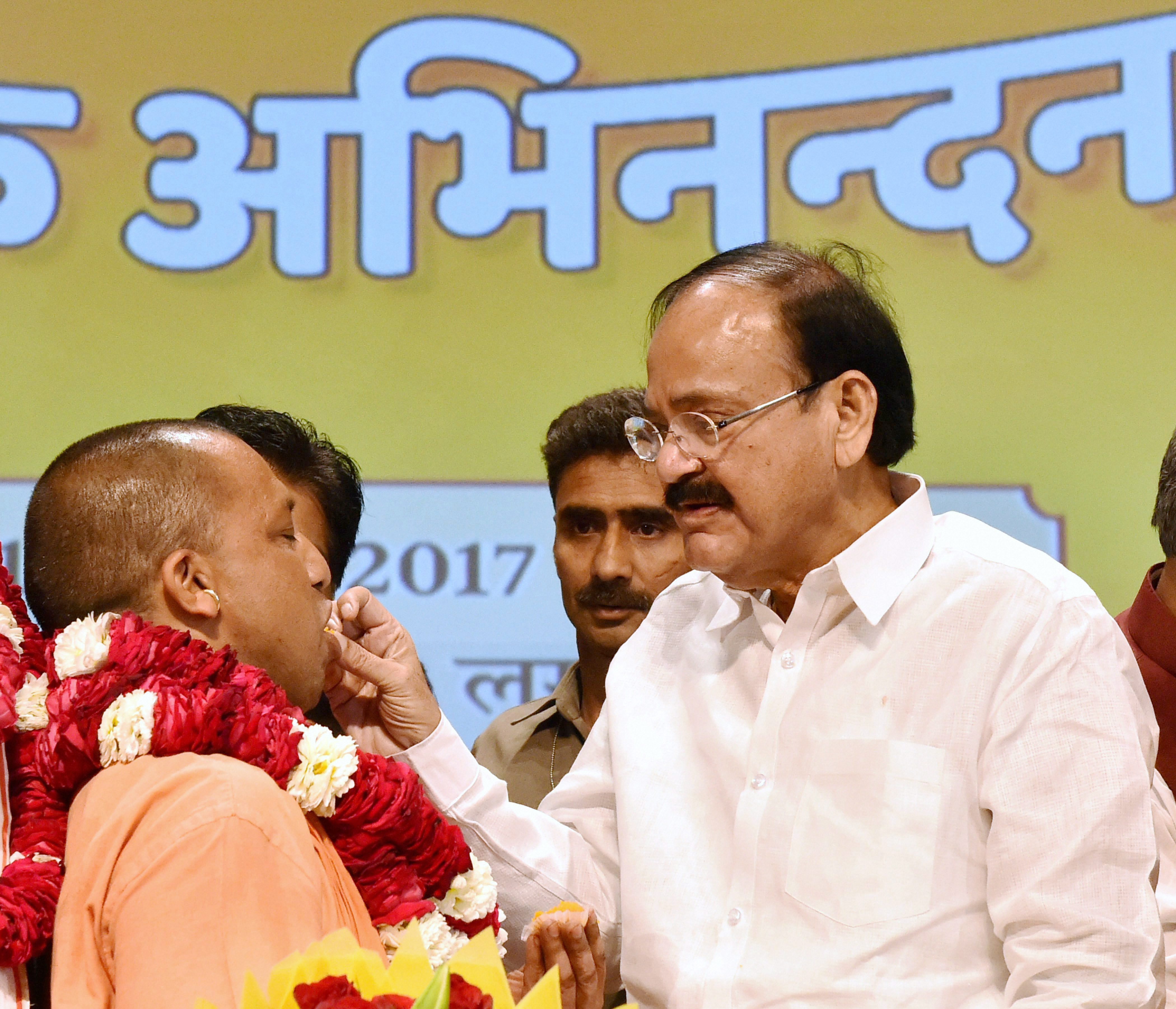 Union Minister for Information and Broadcasting M. Venkaiah Naidu offering sweets to Yogi Adityanath after he was elected leader of the BJP legislature party in Lucknow on Saturday. Credit: PTI/Nand Kumar

Lucknow: Yogi Adityanath, the controversial mascot of hardline Hindutva, will be the next chief minister of Uttar Pradesh.

In a move that surprised many, the 44-year-old five-term MP from Gorakhpur was elected leader of the BJP legislature party at a meeting of the newly elected MLAs, a week after BJP won a resounding three-fourths majority in the assembly and making a comeback to power  in Uttar Pradesh after 15 years.

State BJP chief Keshav Prasad Maurya, who was himself in contention for the top job, first announced Adityanath’s election.

Maurya, the MP from Phulpur in Allahabad, will be the deputy chief minister, a position that will also be held by senior BJP leader and Lucknow Mayor Dinesh Sharma.

Later, addressing the media, Union parliamentary affairs minister M. Venkaiah Naidu, who along with BJP general secretary Bhupendra Yadav was present at the meeting as central observer for the election, told a press conference that Adityanath’s name was proposed by Suresh Khanna, an 8-term MLA, and seconded by 10 others.

Naidu said that even after the proposal was made, he asked the 312 newly elected MLAs if they wanted to propose anybody else for the post, but they all backed Adityanath unanimously.

Naidu said that the Yogi then said he needed two deputy CMs to assist him in the task of running the state, following which it was decided that Maurya and Sharma would hold the posts.

As the meeting was about to begin, an element of surprise gripped the venue when Adityanath reached Lok Bhawan opposite the imposing Assembly complex.

Midway through the meeting, Sharma was asked to attend the deliberations.

Interestingly, none of the three is a legislator in Uttar Pradesh.

As soon as it was decided that the saffron-robed Gorakhpur MP will hold the reins of the state, party leaders and MLAs rushed to the dais with sweets and garlands.

Adityanath will be the 21st chief minister of Uttar Pradesh and the fourth from the BJP.

He will be sworn in on Sunday at a ceremony at Kanshiram Smriti Upvan, where Prime Minister Narendra Modi and BJP chief Amit Shah will be present.

Adityanath, considered a divisive political figure, enjoys considerable popularity in the state and is known to make provocative statements, be it about Muslims, Islam, Pakistan and other topics.

His elevation as chief minister of the volatile state would mark the culmination of an aggressive two-pronged election campaign by the BJP in which Prime Minister Narendra Modi talked about the party’s development agenda, but sundry leaders raked up the issue of Ram temple.

A strong advocate  of the construction of a Ram temple at the disputed site of the now-demolished Babri Masjid site in Ayodhya, Adityanath drove BJP’s Hindutva campaign in eastern UP in the just concluded Assembly polls.

The Yogi, who wears ‘Hindutva’ on his sleeve and has been accused of involvement in quite a few communal incidents in the past, wields considerable influence among Hindu hardliners.

Adityanath had a testy relationship with the BJP leadership and his elevation has left many puzzled, with political circles abuzz with talk of RSS having prevailed over the party in deciding the new chief minister.

Adityanath has rebelled against his party on several occasions, but because of the sway he holds over ‘Hindu’ voters, the BJP apparently could not ignore his ‘leadership qualities’.

Naidu said, “This is a historic win. This is a watershed moment for BJP…BJP has become a common man’s party. UP message is very clear and it is that country wants to move with Modi.”

“Mandate is for development, mandate is against corruption, against black money…,” he said, with the Yogi by his side.

“This mandate is against caste politics, religious politics and vote bank politics,” he said, claiming that all the five regions in UP and all communities had overwhelmingly voted for the saffron party.

In the just-concluded assembly elections, the BJP stormed to power in Uttar Pradesh, securing a three-fourth majority and demolishing rivals SP-Congress and BSP.

Showing an astonishing performance, the BJP got 312 seats in the 403-member Assembly.

Its allies Apna Dal (S) and SBSP bagged nine seats and four seats, respectively, taking the total tally of the combine to 325.

On the other hand, the Samajwadi Party won 47 seats, while its ally the Congress got seven. The Bahujan Samaj Party won just 19 seats, finishing a dismal third.

The chief minister will have a long list of tasks to accomplish going by BJP’s Lok Kalyan Sankalp Patra (Pledge for People’s Welfare) which promised a host of sops for students, women and farmers, especially free education, laptops and LPG connection in every home.

Before Adityanath, Kalyan Singh, Ram Prakash Gupta and Rajnath Singh of the  BJP have served as UP chief minister.

Like him, Chandra Bhanu Gupta, Charan Singh, N.D. Tewari, Mulayam Singh Yadav and Mayawati too have served as chief minister more than once.

Mayawati has the distinction of holding the post four times, while Mulayam was CM thrice.

Mayawati and the outgoing chief minister Akhilesh Yadav have the credit of completing a full five-year term.

Interestingly, the BSP supremo also has the distinction of serving for the shortest term of four months,when she first took over the reins in 1995.

Charan Singh, Ram Naresh Yadav and Banarsi Das served as non-Congress chief ministers with Yadav and Das holding the reins of the state during the Janata Party rule.