"Our 'yashasvi' (renowned) and popular MLA Kuldeep Sengarji is lodged here for quite some time. I thought it appropriate to thank him after the elections," he said. 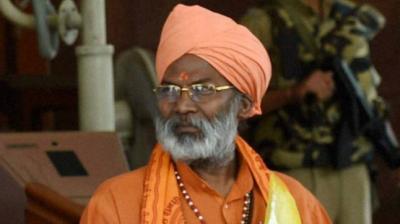 Sengar, a four-time MLA, is lodged in the jail for allegedly raping a woman who had visited him for a job on June 4, 2017.

Speaking to reporters after the meeting, Sakshi Maharaj said, “Our ‘yashasvi’ (renowned) and popular MLA Kuldeep Sengarji is lodged here for quite some time. I thought it appropriate to thank him after the elections.”

Jail superintendent D.C. Mishra said the meeting lasted about two minutes. He said the MP enquired about Sengar when he was about to leave after spending half an hour with him.

“He said he would thank the MLA. He thanked him and then left. It lasted barely two minutes,” the jail superintendent stated.

Mishra told the PTI that as Sakshi Maharaj was an MP, he was “accorded the protocol”.

“Today is Eid and World Environment Day. He sat for some time and discussed what is being done in jail. He was told about various horticulture works undertaken in the jail,” he told the PTI. The Unnao MP also planted a sapling in the jail.

Sakshi Maharaj’s victory margin in Unnao in the 2019 elections – at 4.09 lakh – was second only to Narendra Modi’s from Varanasi.

This is not the first time the BJP leader has openly voiced his support to a rape accused. In August 2017, he said that the woman who accused Dera Sacha Sauda chief Gurmeet Ram Raheem Singh should not be believed. “Who is right? Crores of people who see god in Ram Rahim or that girl who filed a complaint? Accusing a noble soul like Ram Rahim,” Sakshi Maharaj said after Singh was convicted.

The Hindutva leader has also made inflammatory and communal remarks on multiple occasions. In November 2018, for instance, he said that the Jama Masjid in Delhi should be demolished as he was sure that there used to be a temple in its place. “When I came to politics, my first statement was in Mathura: ‘Leave Ayodhya, Mathura and Kashi aside, and demolish Jama Masjid in Delhi and if idols are not found below the staircase, then I should be hanged’. I still stand by this statement,” he said.

After the murder of Mohammad Akhlaq in Dadri over rumours that his family was consuming beef, the leader had said Hindus were ready to kill to protect cows from slaughter. “We won’t remain silent if somebody tries to kill our mother. We are ready to kill and get killed,” he had said.