The incident created a flutter in the area as six similar flags with “ISIS NE” inscribed on them were found in the state’s Goalpara district on May 2. 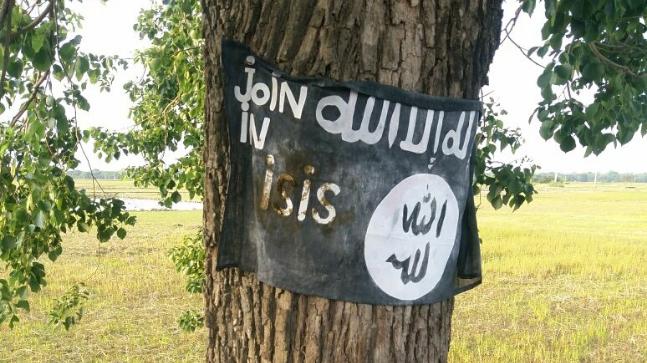 As per local media reports, on May 7 night, acting on a tip-off, police in Nalbari district’s Belsor area picked up the BJP members for their alleged role in sticking the flag to a tree in the area. The members have been identified as Tapan Barman (from Kaihati), Dwipjyoti Thakuria, Sorojjyoti Baishya and Pulak Barman (from Belsore), Mojamil Ali (from Chamata) and Moon Ali (from Baruakur). Barman has been identified as a former Congress councillor who shifted to the BJP and is presently a member of its district committee.

On May 3, villagers found the flag with the message “Join the ISIS” written in Arabic stuck to a tree in a paddy field in Koihata area of the district, following which they informed the nearby Belsore police station. The police took off the flag and told local reporters that it would conduct an inquiry as to who might be responsible for it.

The incident created a flutter in the area as six similar flags with “ISIS NE” inscribed on them were found in the state’s Goalpara district on May 2.

The flags were found just days ahead of the visit of the 16-member joint parliamentary committee headed by BJP MP Rajendra Agarwal set up to hear representations regarding the Citizenship (Amendment) Bill 2016. The BJP government at the Centre had introduced the Bill in the Lok Sabha in 2016 to enable citizenship to Hindu Bangladeshis, among others, on the basis of religion. While the Bill has been vehemently opposed by a large number of people in the state as it is against the Assam Accord of 1985, it has received overwhelming support in the Bengali Hindu-dominated Barak Valley.

Between May 7 and May 9, the visiting members of the JPC had received over 400 representations both for and against the Bill.