After an embarrassing end to the three-day Devendra Fadanavis-Ajit Pawar government, the BJP in Maharashtra is facing another major crisis. Disgruntled leaders, mostly from Bahujan communities, are airing their frustrations.

First, Pankaja Munde, an OBC leader, created a furore when she wrote a cryptic Facebook post last week asking her supporters “which way to go forward”. Although she has denied any intentions of leaving the party, it is clear that she is not happy.

Secondly, and most importantly, Eknath Khadse, another tall OBC leader, spoke about “systematic targeting of Bahujan leaders within the party”, alleging that the defeat of both Munde and Rohini Khadse (his daughter) in the 2019 assembly polls was an “inside job”. Without naming ex-CM Fadnavis, he also asked the state leadership to own the responsibility of the defeat.

Even after party chief Chandrakant Patil met him, Khadse sounded defiant. On December 7, he told reporters, “Workers feel that Bahujan leaders who have toiled hard, giving their blood and sweat for the party’s growth are being targeted by some people in the party.” He cautioned the leadership that if this is not addressed and his humiliation continued, he may have to “consider other options”.

Leaders from the Bahujan community like Khadse, Munde and Vinod Tawde have been made powerless in the past four years. While there are other Bahujan OBC leaders in the party, these three are assertive and ambitious. Even during the month-long political stalemate before the Maha Vikas Aghadi came to power, none of them spoke to the media.

When asked if he would like to mediate between the BJP and Shiv Sena, Khadse sarcastically responded that he no longer enjoys the status in the party to mediate.

If you need proof of assertive Bahujan leaders being sidelined, look no further than the hall in which Devendra Fadanavis was unanimously elected as the leader of the BJP legislature party on October 30 this year.

Five years ago, Eknath Khadse, Pankaja Munde and Vinod Tawde were at their peak: Yet, the then-44-year-old Devendra Fadanavis, a Brahmin from Nagpur, received the nod ahead of all his challengers to become the first chief minister from the BJP in the state.

This time, Eknath Khadse, who was denied a ticket, was not even invited to the meeting to elect the legislature party leader, despite being in Mumbai. Vinod Tawde was present but he too had been relegated after being denied ticket. Pankaja had been defeated in the assembly polls.

None of these leaders had a top ministerial post in Fadanavis’ cabinet. While Khadse and Tawde had served as leader of opposition in the legislative assembly and legislative council respectively, Fadanavis was the state party chief in the run-up to the 2014 elections.

Not only did Fadanavis get the job, but he also ensured that no other contender even came close. Upper caste leaders such as Fadanavis and party chief Chandrakant Patil, a Jain, do not have the mass base that the Bahujan leaders do, but wield all the power within the party.

The party currently looks more like the BJP of 1980s, where it was known as the party of Bhatji and Shetji —Brahmin and Baniyas. It took continuous effort from Pankaja’s father, late Gopinath Munde (of Vanjara backward caste), and then Eknath Khadse (Leva Patil backward caste) to get the party’s message to the OBC and lower castes.

Fadanavis vs Khadse or Fadanavis vs Munde is a battle that the state has seen since the ascent of Fadnavis. Within 48 hours of Fadanavis taking charge, Khadse told reporters, “People wanted a Bahujan face as BJP’s CM”, exposing the caste faultlines. Pankaja Munde, on several occasions, claimed that she was the real CM in the hearts of the people (“Mi Janatechya Manatali Mukhyamantri aahe”).

While Tawde too had thrown his hat in the ring, but then tried hard to co-opt power with the CM. But his wish for the coveted home ministry rattled Fadanavis. The chief minister spent the next five years cutting them to size one by one, only to bring turncoat leaders from the Congress and NCP into the party before the 2019 elections.

Khadse was one of the most vocal leaders of the party. But within two years of the BJP coming to power in 2014, the disgruntled Khadse, was made to resign as the minister of revenue and agriculture, following allegations of corruption. Despite a clean chit given by the Anti-Corruption Bureau two years later, he was not given a place in the cabinet.

In the 2019 assembly elections, he was shockingly denied a ticket. After he threatened to rebel, his daughter Rohini was given a ticket. She lost the election to a Sena rebel, who Khadse alleges was propped up by the BJP.

Fadanavis could not risk Tawde, who is the same age as Fadanavis, becoming ambitious.

Today, Tawde remains a shadow of himself, seen standing behind Fadanavis or Chandrakant Patil. While Khadse and Munde are seen as rebels, Tawde has not spoken up yet.

Her supporters in Ahmednagar even burned effigies of the CM in protest – pushing the cold war between Fadanavis and Munde into the open.

Last year, Fadnavis also rolled back the decision by her ministry (women and child development) of putting angandwadi workers under the Maharashtra Essential Services Maintenance Act, further widening the divide between the two.

Interestingly, she invoked the story of Eklavya during her rallies. While calling Fadanavis her guru, she said he could take her thumb if he so wished.

In the assembly elections, Pankaja was defeated in the Parli constituency by her estranged cousin Dhananjay Munde of the NCP in one of the keenly watched contests. 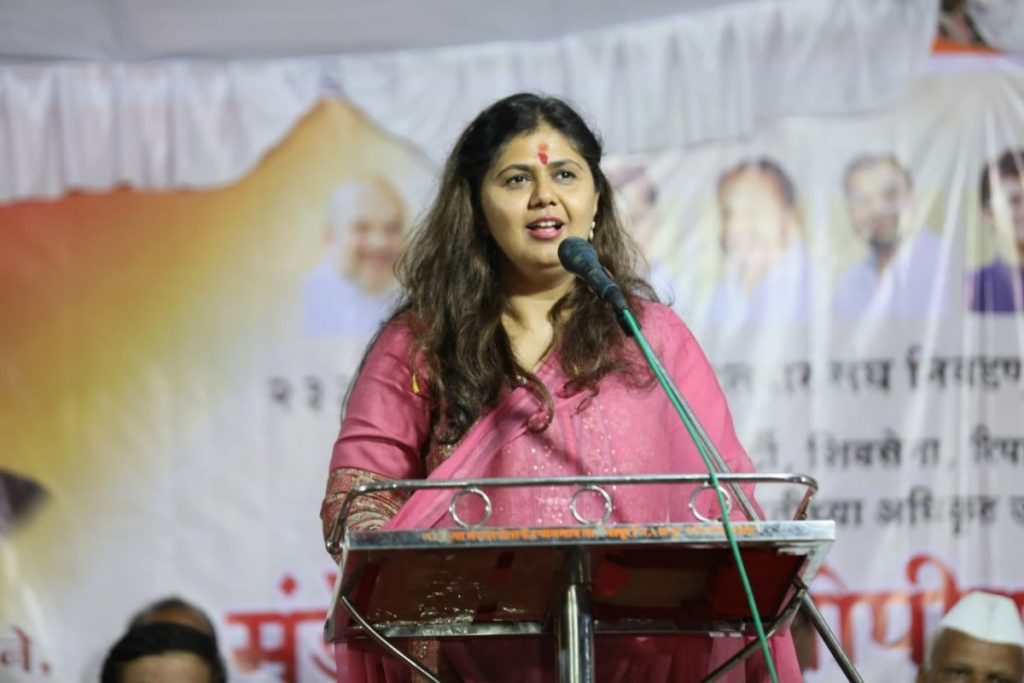 BJP, fighting alone during the 2014 assembly elections, rode on the charisma of its Bahujan leaders and the Modi-wave to win 122 seats. But five years later, led by Fadanavis and in an alliance with the Shiv Sena, the party’s tally reduced, even with two dozen Congress and NCP turncoats on their side.

Fadanavis completed the full five-year term as chief minister of Maharashtra and became the party’s undisputed leader. It is alleged that news about ‘corruption’ of his colleagues was provided to Fadanavis-friendly media — called by few as ‘Lashkar-e-Devendra’.

One can argue that the BJP denied ticket these leaders becuase they were allegedly involved in scams or found themselves in controversies. Even Prakash Mehta, a Gujarati, was denied ticket. But this is not completely true. Chandrakant Patil, the revenue minister, was also accused in the multi-crore land scam in Pune, but was never sidelined.

Chandrashekar Bawankule, a backward class leader, who few called one of the best performing ministers was also denied a ticket, without any reason being given. After being told that his wife would be fielded, she was asked not to file the nomination in the last minute.

Although the BJP has many Bahujan MLAs, it appears that only assertive leaders such as Khadse, Munde and Tawde face isolation within the party.

Also Read: BJP Played a Do-or-Die Game, the New Maharashtra Coalition Can Now Do the Same

Prakash Shendge, ex-BJP MLA alleged that the party has been deliberately targeting OBC leaders such as Munde and Khadse. The accusation gains credibility due to the fact that large OBC communities such as Dhangar, Mali and Vanjari (known as MaDhaV) have only one representative in the 2019 assembly.

It is also important to note that the internal squabble has only come to the fore with Fadanavis’s resignation as the Maharashtra chief minister. Now, the disillusioned leaders believe that they have enough ammunition to target Fadanavis.

The mini-rebellion has definitely set alarm bell ringing for the party, which has realised it has to fix the balance of power in the state. It has already lost its 25-year-old ally Shiv Sena and the CM chair. It will be interesting to see how the party handles the discontent of its assertive Bahujan leaders.