'All Pleas Fell on Deaf Ears': After Resigning, BJP MP from Ladakh Writes to Modi

Buddhist leader Thupstan Chhewang has written a charged letter to the prime minister, accusing his party of doing nothing towards fulfilling the promises they made during the 2014 campaign in Ladakh.

Srinagar: After resigning from BJP’s basic membership and renouncing his seat from Ladakh, former BJP leader Thupstan Chhewang has written to Prime Ministers Narendra Modi. The letter serves to remind him that the ‘unfulfilled’ promises of development – key to winning them the Ladakh seat for the first time in 2014 – today sound like “empty rhetoric” to the region’s electorate.

In a strongly-worded letter, Chhewang charges the Modi-led government with doing nothing for Ladakh during its four years of rule at the Centre. Despite repeated pleas to the central leadership, national executive council and even to Modi himself, the 2014 election promises remained unfulfilled.

“…what could you [Prime Minister] tell the people now? What was achieved five years ago was on the strength of slogans, which to the electorate at large would sound like empty rhetoric at this juncture,” reads the two-page letter addressed to the prime minister, which also brings to the fore the rampant lobbyism and bickering within the party’s state unit. A copy of the letter has also been sent to BJP president Amit Shah.

Also read: Is This the End of the Road for the BJP in Ladakh?

‘All pleas fell on deaf ears’

Seventy-two year old Chhewang announced his resignation from the party and parliament on November 14. Though at the time citing “health grounds” as the reason, in his letter to Modi, he clarifies his position as a representative had increasingly became “morally and political untenable” after the party exhibited little concern for fulfilling its electoral assurances.

Ahead of the 2014 general elections, several BJP leaders including Nitin Gadkari, had made several promises to Ladakhis:

As the BJP-led government’s term at the Centre comes to an end, none of these promises have been fulfilled. Chhewang writes, informing the prime minister that he has already submitted his resignation as MP to the Lok Sabha Speaker:

“I kept writing to almost all party leaders – encroached at times even upon your valuable time – and also spoke in national executive council meetings reminding all about our commitments to the region [but] all pleas fell on deaf ears and our leaders never cared to logically explain the reason for delay in executing the electoral assurances.”

Chhewang, who exercises considerable influence in Buddhist dominated Leh and parts of Kargil, explained that flawed planning for elections to Ladakh Hill Development Council (LHDC), Kargil is what led to the party’s crushing defeat last September.

He also questioned the unceremonious removal of the BJP chief executive councillor of LHDC, Leh Dorjey Motup, after the party’s humiliating defeat in recently concluded civic body polls. Motup was succeeded by Jamyang Tsering Namgyal, who is believed to be close to state party president Ravinder Raina. 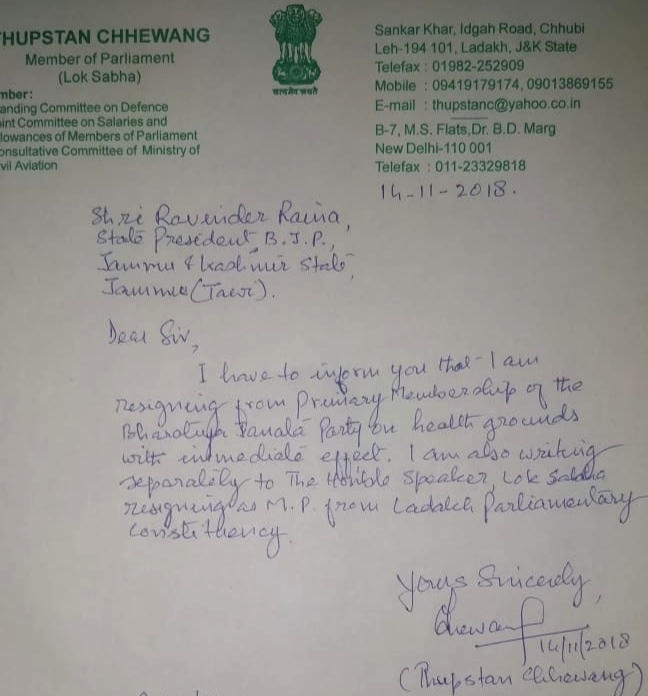 While the BJP failed to win even a single ward in two municipal committees of Kargil and Leh – comprising of 26 wards – it had won just one of 26 seats in the LHDC, Kargil elections. The party even lost the Thiksay seat in LHDC, Leh to Congress, for the first time since the body was set up in 1995. The letter continues to read:

“The central party leader in charge of J&K – Ram Madhav – and the current state leadership made matters worse by repeatedly rubbing salt into [the] wounds of Ladakh. I felt that I had no choice but to keep away from their thoughtless action in our region … these [losses] are examples of the total absence of application of mind with 2019 parliament election round the corner.”

Hitting out at J&K BJP chief

Taking a dig at state BJP chief Ravinder Raina, the Buddhist leader writes that propaganda against him forced him to make things clear. Chhewang goes on:

“I had decided to keep my resignation from the party and Lok Sabha low key as my intention was never to score a political point. However, I’m constrained to give vent to my feelings now, in view of the propaganda being indulged by state president Ravinder Raina about me writing letters to central party leadership ‘for the one year’ – expressing my willingness to quit active politics and opting for spiritual isolation … this [propaganda by Raina] is far from the truth.”

“My idea of spirituality is not devoid of politics,” Chhewang writes to the prime minister. “In this regard I’m guided by Mahatma Gandhi.” He concludes his letter with a Gandhian aphorism: “I could not lead a religious life unless I identified with the whole of mankind and that I could not do unless I took part in politics… I don’t know any religion apart from human activity.”