Is the End of the Road Near for BJP and JD(U) in Bihar?

The Bihar chief minister's refusal to accept 'symbolic' representation in the Modi cabinet may lead to their eventual parting of ways. 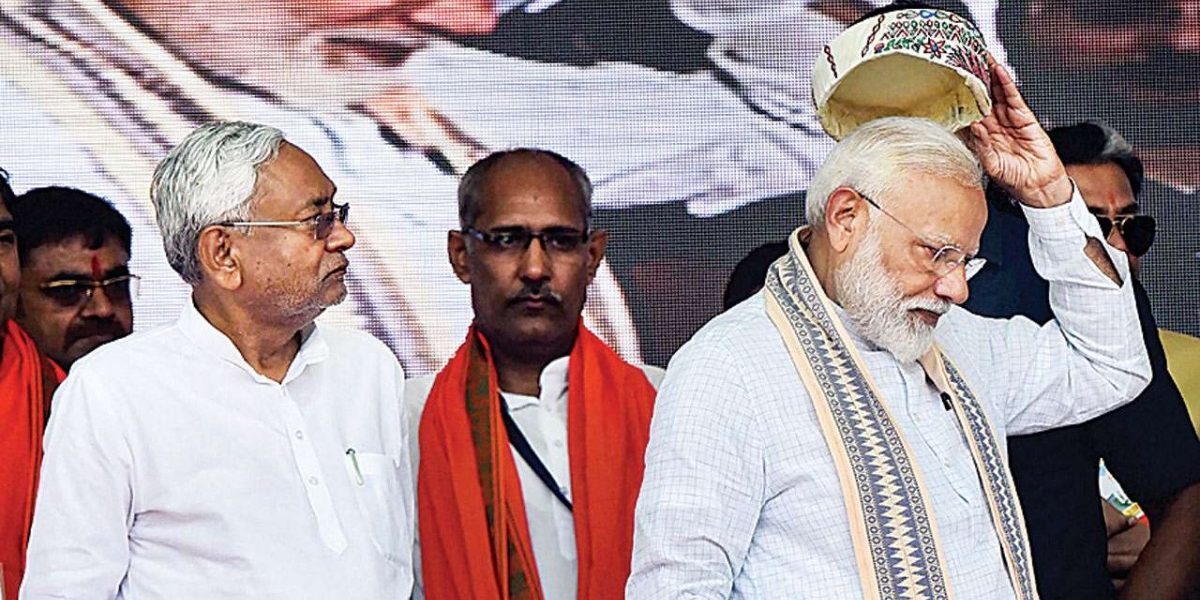 Patna: Nitish Kumar’s decision to not accept ‘symbolic’ representation in the Narendra Modi-led council of ministers may eventually culminate in the break-up of the alliance between the Bharatiya Janata Party and the Janata Dal (United) in Bihar ahead of the November 2020 assembly elections. The BJP had offered only one berth to each of its allies – including the JD(U) – irrespective of the number of their MPs.

In what is being seen as “tit for tat,” Nitish on Sunday expanded his cabinet, inducting as many as eight JD(U) legislators in his ministry and leaving barely one berth for the BJP – which said the “suitable person would be inducted in the ministry later”. The Modi cabinet was sworn in on May 30.

Despite the Bihar chief minister leaving the BJP out in the cold, he maintained, “Everything is fine with the NDA. We are part of the NDA and will remain so”. The party general secretary, K.C. Tyagi too said, “We wanted a substantive representation of JD(U) in the Narendra Modi ministry, but the BJP offered only one berth as symbolic representation, which we couldn’t have accepted. But we are in the NDA”.

Nitish’s antecedents, however, suggest that he seldom declares a break-up until it has become formal. About three days ahead of breaking up with the BJP in 2013, Nitish had said in the Bihar assembly, “Today we are in the NDA. None among us knows what will happen tomorrow”. Similarly, he had gone to Rajgir for health reasons in July 2017 for about five days without giving any indication that he would dump the Rashtriya Janata Dal. But on his return on July 27, he suddenly resigned as the chief minister, dumping the RJD and soon getting back to the NDA.

Political observers feel that Nitish’s utterance that “everything is fine with NDA” was more public posturing.

Also read: Tejashwi Yadav Fought the 2019 Elections With 2020 in Mind – and It Backfired

In fact, by refusing “proportionate” representation to the JD(U) as wished by its president and Bihar chief minister, the BJP – powered by the brute majority – has not only cornered Nitish but has made clear its intent to push its agenda – one on which Nitish has steadfastly differed.

Nitish, in keeping with his nature not to compromise on his core ideological positions and proportionate political share, compelled the BJP to agree on an equal number of seats – 17:17 – to be contested between the BJP and JD(U) in Bihar. They won an almost equal number too – 16 for the JD(U) and 17 for the BJP.

Right from the beginning of the campaign for the Lok Sabha polls, the JD(U) refused to accept the BJP and Modi as the “bada bhai (elder brother)” and itself as the “chhota bhai (younger brother)”. Despite his limitations as the leader of a regional party, Nitish never got drowned in the BJP’s narrative.

For instance, Nitish remained silent when the BJP and the Lok Janshakti Party (LJP) cadres joined the Vande Mataram chorus led by Modi at election meetings at Darbhanga and Muzaffarpur. BJP chief Amit Shah repeatedly announced at his meetings that his party would end Article 370, build the Ram temple at Ayodhya and implement the uniform civil code – but neither Nitish nor any of his party campaigners supported Shah’s line.

Ever since 1996, when Nitish struck an alliance with the BJP, he made it clear to the saffron party – then in the Atal Bihari Vajpayee and L.K. Advani era – that he would never agree with the BJP on the issues of Article 370, Ram temple and the uniform civil code, but would work with it on mutually accepted common minimum programme for governance.

“But there is a world of difference between the Atal-Advani and Modi-Shah periods. The former were still in quest of legitimacy and sought allies via compromise. Now the party (BJP) has a majority on its own”, writes the historian and professor at Ashoka University, Mahesh Rangarajan.

Nitish, despite his differences with the BJP on the core issues, conducted himself as an honest ally. He addressed as many as 170 election meetings covering the constituencies of all the 17 BJP candidates and six LJP candidates. He asked for “majdoori (wage)” for his work in terms of the vote while praising Modi for releasing Rs 50,000 crore for the development work in Bihar. Though his party did not bring out its manifesto to ensure that the NDA’s campaign didn’t get affected by the contentious issues between the BJP and JD(U), Nitish never expressed conformity with those issues either.

Now with the BJP securing a landslide majority on its own, the Modi-Shah duo is understood to have got the “legitimacy” and “license” to implement its totalitarian agenda that has been “inimical” to the very foundation of the idea of India based on coexistence, plurality and social harmony as envisioned by the founding fathers of India.

The radical Hindutva-laced BJP under Modi-Shah may find the likes of Nitish Kumar as “irritant” in the way of implementing its agenda, and might have thought to remove the JD(U) by giving it token representation. Given his background and political training, “Nitish can’t go with the BJP’s sectarian lines,” said the veteran socialist leader and RJD vice president Shivanand Tiwary who has worked with both Lalu Prasad and Nitish Kumar since the JP movement days.

Political observers believe that Nitish has accepted Modi as the prime minister but not his (Nitish’s) leader. Nitish’s leaders and icons continue to be Ram Manohar Lohia and Jayaprakash Narayan who preached unity in diversity, coexistence and social harmony.

To his advantage, Nitish’s JD(U) has secured 21.8% votes this time from 16.04% in 2014 and the BJP’s vote-share has slid down from 29.40% in 2014 to 23.58% this time. The BJP leaders are claiming that Nitish has benefitted from the Modi wave but the fact remains that he evidently has created a solid base among the extremely backward classes and Mahadalits through his work as well as social engineering.

In a way, Nitish might be looking for new allies in face of assembly elections due later next year in Bihar. And the BJP might be looking to gain a majority on its own in the state and replace Nitish with its own chief minister. It is premature to say that all other non-BJP parties would join Nitish, but he has surely begun the exercise to challenge the BJP’s move to establish its unilateral say in Bihar.

Nalin Verma is a senior journalist and co-author of the recently-released book Gopalganj to Raisina: My Political Journey, Lalu Prasad’s autobiography.