The high court had in 2014 held both parties guilty of violating FCRA norms for accepting donations from London-based mining firm Vedanta. 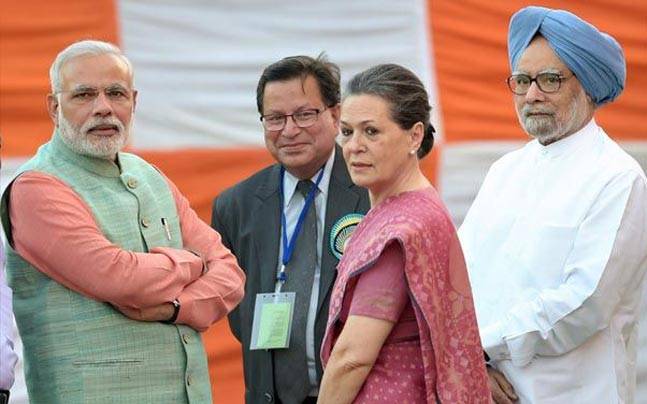 Both the BJP and the Congress have been implicated for FCRA violations by the Delhi high court. Prime Minister Narendra Modi, former PM Manmohan Singh and Congress President Soina Gandhi. Credit: PTI

Stranded on a loose legal wicket, the BJP and Congress on Tuesday withdrew their respective appeals in the Supreme Court against the Delhi high court verdict that held them guilty of violating the Foreign Contribution (Regulation) Act (FCRA) when they accepted donations from London-based mining giant Vedanta.

According to the Association for Democratic Reforms (ADR), a non-governmental advocacy organisation seeking electoral reforms and co-petitioners in the case, the union home ministry, which is the administering authority of FCRA, is now legally bound to take action against both parties for accepting foreign donations. The FCRA bars all Indian political parties from receiving any foreign funding.

Jagdeep S. Chhokar of ADR told The Wire that in light of the present developments, the 2014 Delhi high court order asking the government and the election commission to act against both parties for accepting donations from Vedanta stands valid currently.

In a surprising move, senior advocates Shyam Divan and Kapil Sibal, representing the BJP and the Congress respectively, sought to withdraw their appeals, following which a bench comprising justices J. S. Khehar, Arun Mishra and A. M. Khanwilkar dismissed the case.

Shyam Divan, counsel for the BJP,  told PTI that the retrospective 2010 amendment in the FCRA provides that a contribution to a political party cannot be regarded as foreign if an Indian holds 50% or more shares in that firm. Indicating that parties can accept donations from an Indian subsidiary of a foreign company (London-based Vedanta, partially owned by Anil Agarwal, in this case), he cited the retrospective clause, which was quietly moved as an amendment earlier this year as one of the inclusions in the Finance Bill or the union budget.

In April this year, The Wire first broke the story about how the union government’s clever amendment to the FCRA in the budget let both the Congress and the BJP off the legal hook. The amendment widened the possibilities for political parties accepting donations from a foreign source and for many foreign corporate bodies to make contributions to Indian political parties.

While the political parties are shielding themselves through the amendment, Chhokar pointed out that most of the donations that are mentioned as violations of the FCRA were made between 2004 and 2010 – a period during which the FCRA (1976) was enforced.

“The retrospective amendment applies to the FCRA (2010). The donations for which the high court had held them guilty were made before 2010. The judgment specifically mentions that it is concerned with the FCRA (1976),” said Chhokar.

He added that the political parties were pleading on the basis of the fact that FCRA (1976) has been repealed. “Our argument was that when the donations were made, it was still valid. The amendment does not cover the donations that the high court is talking about. The parties stay guilty as of now. They did not stand any legal ground. It was an open and shut case.”

“What we feel is that the government can look to amend the FCRA again, this time by introducing a more precise clause that shields them,” Chhokar said.

Last week, Justice Khehar told the counsels for the political parties that the bench was ready to listen to their arguments on how the amendment is applicable to the concerned donations. The counsels replied that they would need to talk to their clients (the BJP and Congress) to discuss the matter. However, the parties decided to withdraw their petitions on Tuesday.

The Delhi high court order, as a result, becomes valid again. Until now, it was in abeyance as the parties had appealed to the higher court.

E.A.S. Sarma, former secretary to the government of India and one of the advocates for government accountability in the case, told The Wire, “The Delhi high court order in 2014 clearly stated that the home ministry should take action against the parties in six months. By not taking any action on the matter, the ministry can be charged with contempt of court.”

He added that it was a “matter of shame that the government introduced the amendment surreptitiously in the Finance Bill to avoid any parliamentary and public discussion on the issue and now the parties are using that to clear themselves in the case.”

Although both political parties had only challenged the illegality of donations from Vedanta’s subsidiary, the original petition by ADR listed more than 25 donations which violated the FCRA (1976). Sarma insisted that all such donations should be brought under the scanner as the nature of donations raises concerns about the much-talked about quid pro quo relationship between corporates and political parties.