Congress leaders responded by protesting outside the chief minister's house, where they allege they were subjected to excessive police force. 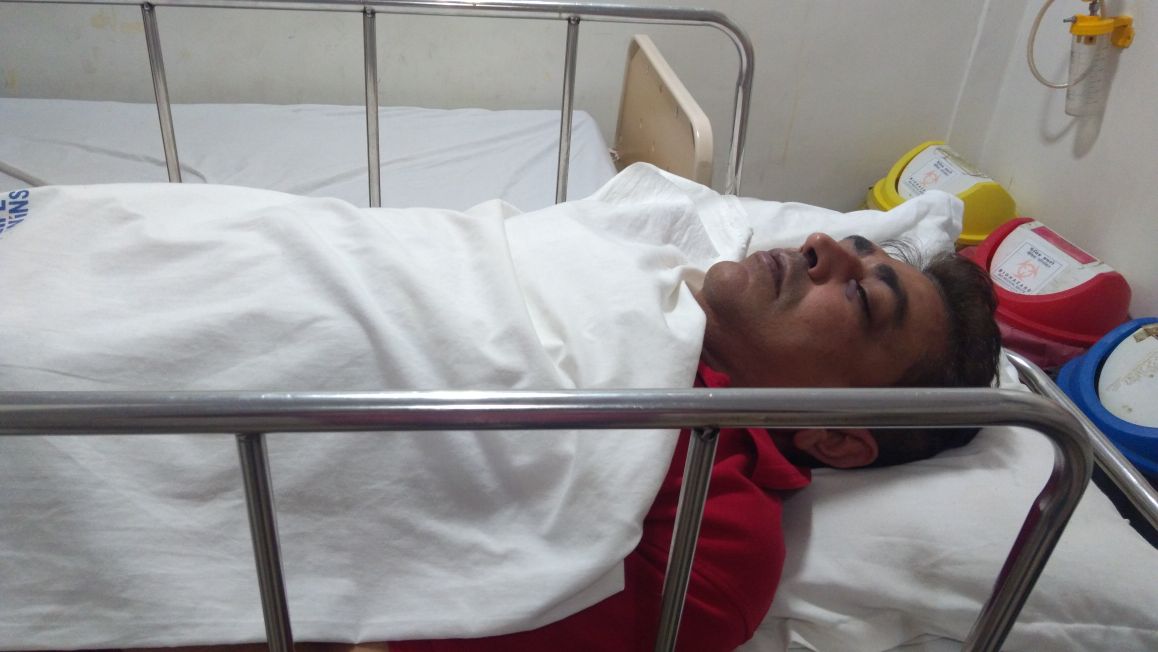 Rajkot, Gujarat: Bharatiya Janata Party (BJP) workers on Saturday (December 2) allegedly beat up the brother of Indranil Rajguru, Congress candidate from Rajkot West, the seat where the BJP has fielded chief minister Vijay Rupani. The incident reportedly occurred at around 9:40 pm, after there was a disagreement between Congress and BJP workers over a campaign hoarding.

BJP workers apparently placed their hoarding on top of one of Indranil’s at Brahm Samaj Chowk, Raiya Road ahead of a rally. When the contractor in charge of banners in the area noticed this, he went to put the Congress banner back up, but BJP workers stopped him. He then informed Indranil’s brother Divyanil Rajguru, who reached the spot with other Congress workers. A heated argument then ensued between Divyanil and the BJP workers. The BJP workers, who were there in larger numbers, then allegedly got violent and started hitting Congress workers and Divyanil with wooden staffs and pipes. Divyanil was hit on his eye, head and leg, and had to be rushed to hospital. He is still admitted at Rajkot’s Wockhardt hospital, and has reportedly suffered a mild haemorrhage, along with injuries on his eye and leg.

“I was passing through the Brahm Samaj Chowk to finish some work my employer had given me. I saw about four or five men beating one man again and again. A crowd began to gather and I could not see the face of the person. Later I found out that he is Indranil Rajguru’s brother,” Pankaj Goswami, an eyewitness to the incident who works in a shop near the spot of the incident, told The Wire.

“All of them work for the BJP and are still in custody. They have been arrested under Sections 143, 120, 323 of the IPC and Section 135 of Gujarat Police Act, which forbids the assembly of more than five people without police permission when the moral code of conduct is in place before an election,” said Anupam Singh Gehlot, commissioner of police, Rajkot.

Following the incident on Saturday, about 500 Congress workers gheraoed chief minister Rupani’s house in Rajkot and sat on a dharna. Indranil and Mitul Donga, the Congress candidate from the Rajkot East constituency, also went to the chief minister’s residence to try and discuss the issue. 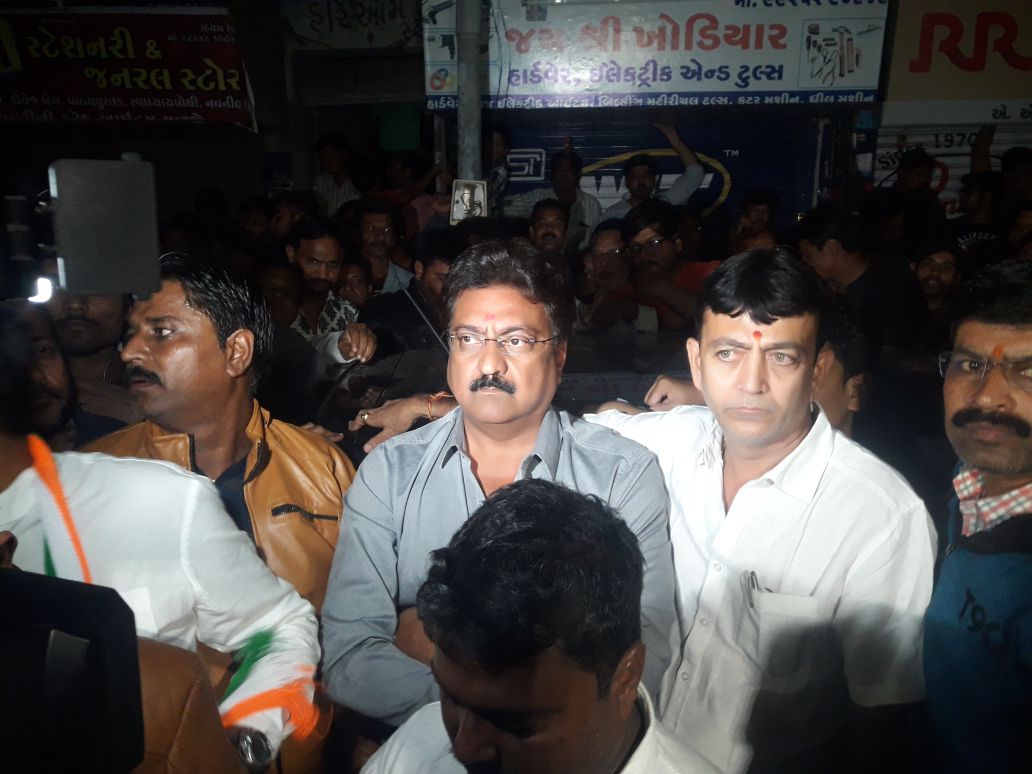 However, police personnel present at the chief minister’s house allegedly resorted to the use of excessive force against the Congress protestors. While Donga and other Congress workers say they suffered minor injuries, Indranil was allegedly heckled by the police and his shirt was torn. Indranil, Donga and about 200 Congress workers were arrested by the Rajkot police.

“We wanted to protest the act of violence on a candidate’s family member by BJP workers. We did not resort to violence, our intention was to sit on a dharna in front of chief minister Rupani’s residence, while our leader was demanding to speak to him in person. But he did not meet Rajguru. Instead, Rajguru, Donga, Mahesh Rajput (Congress city president), Bhavesh Boricha (a local Congress leader) and Rajeev Satav (Congress MP from Hingoli and Saurashtra in charge, who had come to visit Rajguru) were arrested. About 200 Congress workers were also arrested,” said Rajubhai Jhunjha, an advocate and Congress worker who was arrested at night on December 2.

“Following the attack on Indranil Rajguru, a mob of about 500 Congress workers, along with Congress leaders like Rajguru, Donga and some others, had gathered outside the chief minister’s residence in the city. The mob was at a distance of about 500 m from the house, shouting slogans and moving ahead. Initially, it was the chief minister’s security that was the concern. As the mob kept increasing in number, a team of about 70 police personnel was despatched under a deputy commissioner rank officer. The officer tried to persuade Rajguru to leave the spot and file an FIR against the assailants who had assaulted his brother. But he not only refused to file a complaint, but stated in front of the media present that he will settle this issue himself. This went on for about an hour and a half. Meanwhile, the mob kept moving ahead and Rajguru kept leading them. Finally, when the mob was at a distance of about 30 m from the chief minister’s residence, the police stopped them and arrested the leaders and 200 workers under Sections 143 and 186 of the IPC and Section 135 of Gujarat Police Act,” police commissioner Gehlot told The Wire. 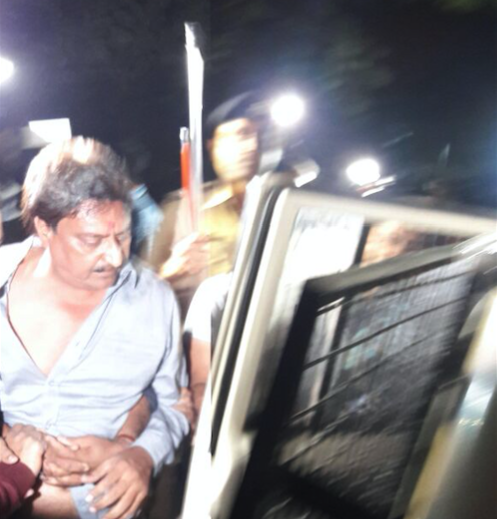 “They were arrested at 2 am and kept at the police headquarters and released on bail at 4:30 am. Rajguru agreed to file an FIR against the assailants and named two persons, following which police went to the hospital and took a statement from his brother,” he added.

Indranil held a press conference later on December 3 over the issue.

“Vijay Rupani and the BJP are rattled. Rupani fears his defeat and has begun resorting to criminal activities. Will Vijay Rupani win this election with the help of goons and by supporting hooliganism?” asked the Congress candidate.

“Police acted like personal staffers for the BJP. It was on the instruction of Nitin Bhardwaj, who is Rupani’s close aide, and Kamlesh Mirani, BJP Rajkot city president, that police lathi charged Congress workers outside the chief ministers house yesterday,” alleged Rajguru.

Rajguru further alleged that DCP Karanraj Vaghela was acting at the behest of the BJP and demanded that he be transferred out of the city till the elections.

The December 2 incidents happened a day before Rajkot witnessed two massive rallies, one each by the BJP and Congress. Prime Minister Narendra Modi visited the city to address a public gathering on December 3. Soon after Modi’s schedule was released, Indranil announced that the Congress shall be organising a public meeting on the same day.