BJP's Backing Gives Strength to Those Agitating for Gorkhaland

Language may have triggered off the current round of violence, but the basic demand is for statehood. 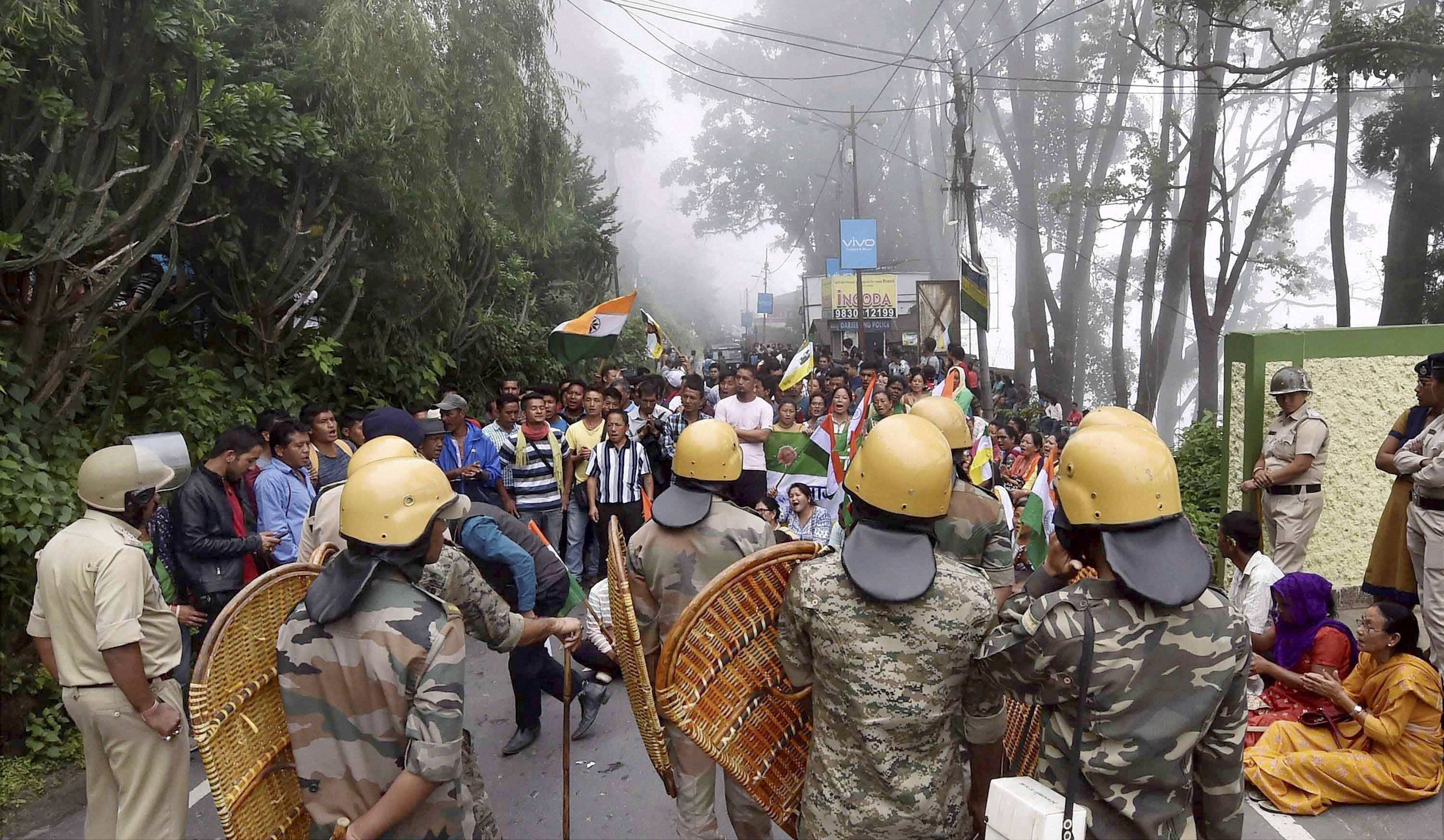 The Darjeeling hills that sit like a bejewelled crown atop West Bengal, complete with an incomparable view of the Kanchenjunga should you be lucky with the weather, are burning again as they have done more than once in the last four decades. Though things are getting worse by the day, it is possible that some formula for regaining temporary peace will be worked out, and normal daily life and the flow of tourists will resume, only for a flareup to happen once again in the not too distant future.

While it is virtually impossible to see a solution acceptable to both sides emerging, it is still vital to retrace recent developments, if only to know what not to do in order avoid a flareup again.

The relationship between the erstwhile Left Front government in West Bengal and the Nepali speaking leaders of the Gorkhaland movement demanding statehood was fraught despite the creation of an autonomous body, the Darjeeling Gorkha Hill Council in 1988 under Subhash Gisingh, leader of the Gorkha National Liberation Front.

But Ghisingh soon lost popularity and when the Trinamool Congress and Mamata Banerjee came to power in 2011, she sought to make a new beginning. The autonomous body was rechristened the Gorkhaland Territorial Administration under Bimal Gurung, a former aide of Ghisingh and leader of the Gorkha Janmukti Morcha (GJM), to include the emotive word Gorkhaland. Its powers too were increased. All went well until Telengana was created in 2014 and the Gorkhaland leaders saw a new ray of hope for their long standing demand of statehood.

A key development took place in mid-May this year when the Trinamool Congress, a plains party, for the first time scored a victory in the hills, by winning the municipal elections for Mirik and relegating the GJM to second position. This emboldened Banerjee who was ready to build on the success. Soon after she held a meeting of the state cabinet in Darjeeling for the first time in 45 years. But unfortunately, the meeting took place under the shadow of the newly revived Gorkhaland agitation.

The latest flareup began after the West Bengal government announced, even as the results for the municipal elections were coming in that the teaching of Bengali would be made compulsory in schools. This was the provocation that brought the dormant forces in Darjeeling back onto the streets again. Though the West Bengal government almost immediately clarified that Bengali would not be made compulsory in the Darjeeling hills, the anti-Bengali language agitation transformed itself into a renewed expression of the long standing demand for a separate state of Gorkhaland. Banerjee, not the sort to step back, is talking and acting tough, and the GJM, which has managed to rope in other political formations in the area behind the latest action, is in a defiant mood. The result, not surprisingly, was escalating violence.

Looking back, it is mystifying why Banerjee should have taken the make-Bengali-compulsory decision. It can only be explained as an attempt at political mobilisation under pressure. (She is conducting a running verbal battle with the Modi government.) What goes against it foremost is that it is unlikely to have any material impact.

Take a state like Karnataka, which is as cosmopolitan as you can get. Despite fringe political elements trying for decades to similarly make Kannada compulsory in schools and signage, and the state government trying to placate them, progress has been slow. High-fee charging schools that follow the CBSE and ICSE systems have managed to keep out of it. The issue is routinely raised during Karnataka Day every year and the government shows that it is making an effort in earnest. Recently it made the teaching of Kannada compulsory in government schools but that is where its remit seems to stop.

More important, in West Bengal, the move is contrary to the self-perception of the Bengali bhadralok, the educated middle class with cultural graces and a strong notion about itself. The bhadralok thinks that Bengali is a rich and superior language and considers that those who live in the state would themselves want to acquire a knowledge of it, as also a taste for Rabindrasangeet (the songs of Tagore), the two for him going hand in hand. If you add to it the bhadralok considering himself to be a cosmopolitan being whose has always had an open mind, as it indeed did through British rule and till the 1960s, imposing the language by administrative fiat would be anathema.

The ultimate reason for not seeking to impose a language is the lesson that the history of the creation of Bangladesh holds. The rulers of Pakistan sought to undermine Bengali and impose Urdu and it is the resultant Bhasha Andolan (language movement) that eventually led to the creation if Bangladesh. The ethno-linguistic rights of people across the world are no longer questioned.

So the West Bengal government should not have done what it did, but why is still there an agitation despite it retracing its steps and reassuring that Bengal will not be compulsory in Darjeeling district schools? Here we come back to the long standing movement for a Gorkhaland state. Banerjee, in fact, began well by going a good way to meet hill aspirations. In fact, when the word Gorkhaland was included in the name of the autonomous regional council, many had expressed the fear that this giving in would be the thin end of the wedge. This is now turning out to be true.

The reason for Banerjee or whoever is in power in West Bengal taking the stand they have is entirely to be expected. No state or nation would allow itself to be divisioned. Whoever wishes to carve out something from an existing political entity will have to fight for it for decades, on and off the street, as has been the case everywhere else.

But one reason why the Gorkhaland agitation has been particularly durable is because of its relationship with the BJP. Since, 2009, the BJP has held the Darjeeling parliamentary seat, first through Jaswant Singh and then S.S. Ahluwalia, with the support of the Nepali speaking people. The current BJP leadership is doing everything for the demand for statehood short of offering open support. Its national leaders are, for the record, urging the West Bengal government to get into talks with the Gorkhaland movement leaders and negotiate a settlement.

What should be clear to the leadership of the BJP in West Bengal is that should the state eventually be bifurcated with the BJP in power at the Centre, it will be held responsible for this by the mainstream voters of the state and will be considered unforgiveable. That raises a big question mark over the BJP’s all out attempt to capture power in the state by pointing to the ‘misrule and appeasement of Muslims’ by the Trinamool administration.

To sum up, we have noticed two ironies. One, West Bengal issuing an administrative fiat imposing the Bengali language, and two, the BJP offering informal support to the Gorkhaland statehood movement. Here is a third. The Nepali speaking people of Darjeeling district in West Bengal are seeking greater control over their destiny by demanding statehood. In Nepal the Madhesi, people of Indian origin who live in the terai or the foothills, are seeking something much more basic. They want a constitution that gives then the fruits of universal adult franchise (the Nepalis of Darjeeling already have this), through the one-man-one-vote principle, so that they are not left with 39 per cent of the seats though they make up 50% of the population, the rest of the seats going to the pahadis or the Nepali hill people.

Subir Roy is a senior journalist and author of Made in India: A study of emerging competitiveness (Tata McGraw Hill, 2005) and the forthcoming Ujjivan: The microfinance frontrunner (OUP).