Details in the Birla, Sahara Papers Reveal Why the Government Is Avoiding Inquiry

It is in both the Congress and the BJP’s interests that these records are not looked into; the Supreme Court should step in and insist on a proper investigation.

It is in both the Congress and the BJP’s interests that these records are not looked into; the Supreme Court should step in and insist on a proper investigation. 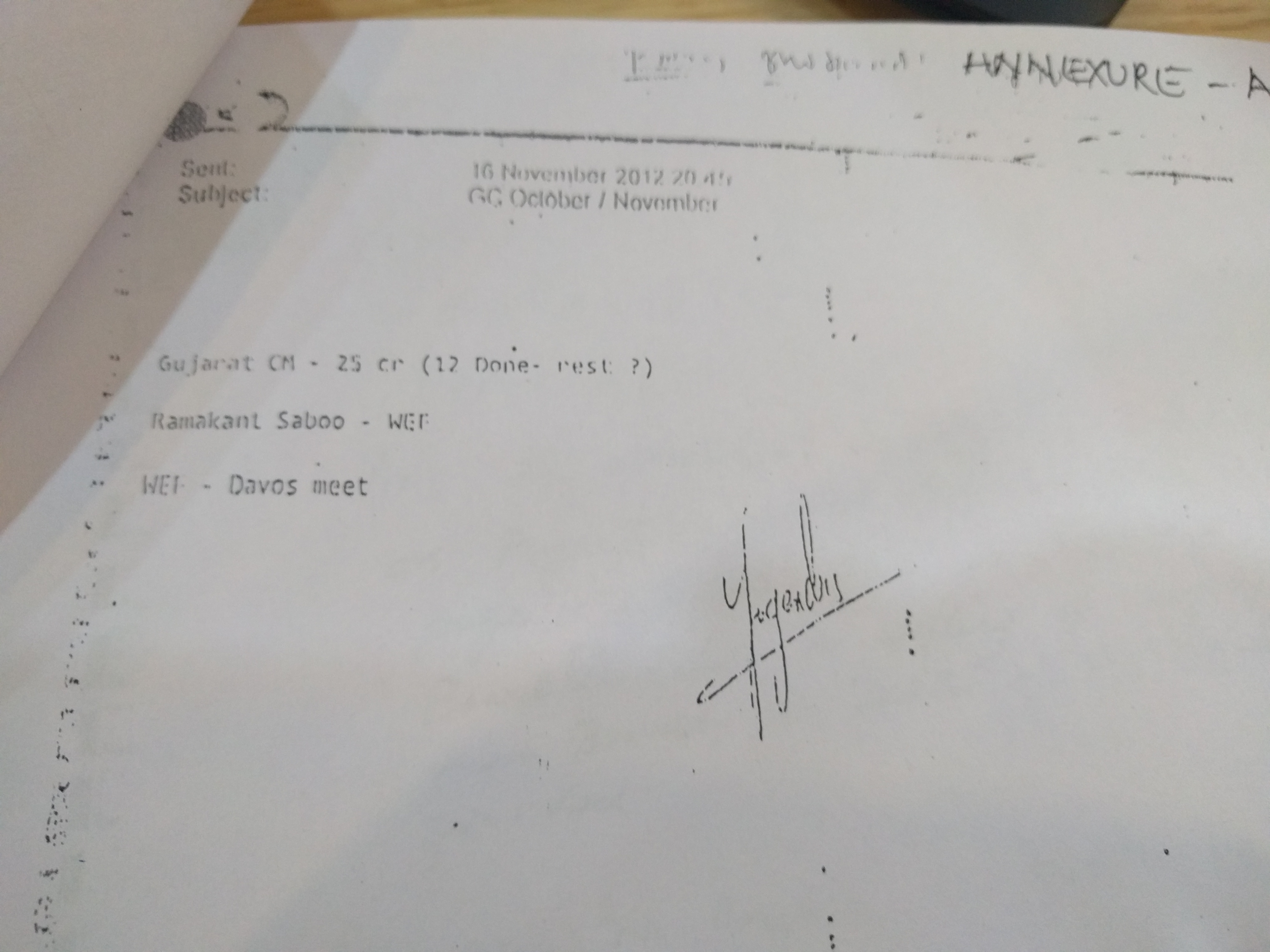 Speaking in Varanasi on Thursday, Prime Minister Narendra Modi said the step of demonetisation has exposed some people’s “kaala dhan” (black money) and “kaala mann” (bad intent). The jibe was aimed at the opposition, who he said were actually siding with the corrupt with their criticisms of demonetisation.

Ironically, one of the strongest piece of evidence of ill intent and black money lies in the infamous Birla and Sahara diaries seized by the Income Tax Department in the raids conducted in 2013 and 2014.

Unfortunately, in the PIL filed on this matter in the Supreme Court, the court proceedings until now have not laid out the full breadth of the evidence of possible bribery and corruption in high places contained in the Birla and Sahara papers.

Details in the papers

The scale of the material available with the government is simply staggering. The Income Tax Appraisal Report dated February 27, 2014 issued by the deputy director of Income-Tax (Inv.), Unit-V (3) Delhi in the Birla matter contains hundreds of seized emails, hand written notes, SMSs, blackberry messages and statements that reveal entries of regular payments made to people bearing names strikingly similar to the then union ministers and ministers in state governments.

Consider this. There is a reference to payments of Rs 7,50,00,000 made to one “Project J -Ministry of Environment and Forest.”

There is another reference of a payment of Rs 5 crore for ‘Jhil + RJM’. Jhilling, Odisha has mines run by Essel, a group company. Environmental clearance was granted for expansion of Jilling Langlota Iron and Manganese Ore Mining on June, 7, 2012. The entries mention payments for ‘Jhil + RJM’ in the period of June to August, 2012.

There are a series of emails suggesting that the company executives were subverting the investigations carried out by the Directorate of Revenue Intelligence by bribing senior DRI officials. An email dated July 2, 2012 states that BGH Exim (a Birla Group company) officials were in touch with the DRI and had approached a senior IRS officer “to weaken the prosecution report with the help of sources.” Another internal company email dated January 2, 2013 titled “Way Forward” talks about an “arrangement” wherein the DRI would return “all the records, electronic devices and other evidence”. Furthermore, it says that “DRI Officials would support our contentions in settlement commission and request for settlement directives.”

In another internal email dated April 7, 2013 states that “As the Investigation Report has already been seen and clearance accorded from the top why would any other matter will get reopened. Sources in DRI hold the view that it is their own interest that the issue is buried completely after the understanding is executed completely as agreed upon.”

An internal email dated April 15, 2013 titled “Tourists” says, “DRI had to circumvent its investigations into other cases”. The author, a senior company official, says in this mail that they had been able to “overcome this hurdle making best use of our sources.” He adds that “as agreed upon the investigations have been restricted to exports of iron ore alone. No other can of worms has been opened/ focussed.”

There is an internal email which talks about payments to a senior minister in the Andhra Pradesh government for procuring a license. In a mail titled “365 days license for AP”, a company executive writes for paying the balance to a state government minister “as the amount for the earlier license for 3 years was 25 and now for 2 years is 35.”

In a back-up message dated May 13, 2013 lists out a list of transactions to various parties including – “RKK 10 cr (1.5cr) OK” and “Veerappa M – GC – Cement Opp – CCI  Report/ penalty—- 2 cr – OK”.  It is a matter of record that the Competition Commission of India had imposed a hefty penalty on the Aditya Birla Group’s cement business unit along with other cement companies.

At the time this email was written, Hindalco Industries, an Aditya Birla Group company, was building a 359 kilo tonne per annum aluminium smelter and a 750 MW power plant which was supposed to draw coal from the Mahan Coal Block located in the Singrauli fields, Madhya Pradesh. “MOEF” is the short form of the Ministry of Environment and Forests.

It is not surprising then that UPA chose to suppress the Birla papers. Any credible investigation would have ascertained the veracity of pay-offs made both to “Gujarat CM” as well as “Project J” and “Veerapa M”. As they say, those who live in glass houses should not throw stones.

That’s why it would be a mistake to see the backup message dated November 16, 2012 titled “GC October/ November” which refers to possible payments made to the “Gujarat CM” as a one-off entry. The Supreme Court is right when it says that one should not be cavalier in making allegations of corruption against top constitutional functionaries without sufficient evidence. But a comprehensive review of Birla’s IT appraisal report shows that senior executives of the company in question had made entries of large pay-offs to specific people, bearing striking resemblance to people holding high public offices, for specific projects. What we have at hand is not a fly-by-night operator but a business conglomerate with commercial interests ranging from operating mines to owning big factories and controlling a string of companies in sectors as diverse as textiles, metals, cement, chemicals and telecommunications.

There is a chart recovered from a computer seized during the raid which lists out the group’s business interests in the state of Gujarat alone. It runs into seven pages. Remarks made in the chart shows that the group was liaising with various public functionaries including the office of the than Gujarat chief minister.

These entries and emails were meant for internal consumption. It is by pure chance that these entries have become public. However, it is in both the Congress and the BJP’s interests that these records are not investigated.

The story of the Sahara diaries is an equally biting commentary on the influence of black money in Indian politics. If the entries made therein are to be believed, the who’s who of Indian politics have been recipients of large amounts of cash from a corporation which has been mired in massive corruption scandals. These include those from at least 18 parties including the BJP, Congress, Janata Dal (United), Rashtriya Janata Dal, Samajwadi Party, Nationalist Congress Party, Jharkhand Mukti Morcha, Jharkhand Vikas Morcha, Trinamool Congress, Biju Janata Dal, Bhartiya Kisan Union, Shiv Sena and the Lok Janshakti Party. Like the Birla papers, here too the biggest amount paid to any politician is to the ‘Gujarat CM’. A sum of Rs 40 crore and 7 lakh was paid in several instalments.

What should have happened

It cannot be one’s case that every public functionary named in the diary should be hanged on the basis of this evidence alone. Instead, what should have happened is the following: The politicians mentioned in the documents should have been called for questioning. The evidence should have been shared with the both the CBI and the Enforcement Directorate. The Sahara and Birla employees whose names appear in these documents as handlers of cash should have been questioned by the agencies. The IT Department should have duly accounted for the Sahara diary in the assessment process.

The reason why the Supreme Court needs to step in is that the IT Department has not even made a mention of the Sahara diary in its appraisal report on the matter. The department hasn’t issued notices to the politicians in question, nor has it made any effort to ascertain whether these transactions between politicians and the Sahara Group took place. In the case of the Birla papers, the appraisal report disbelieves the explanation given by the company executives for these entries and concludes that it requires further investigation. But the department fails to act on its own recommendation. Neither the Sahara diary nor the Birla papers have been shared with the CBI and ED.

Under these circumstances, it would be unreasonable for the court to demand more evidence of wrongdoing from a PIL petitioner. More evidence can be gathered only if there is a rigorous investigation.

The question that prime minister himself needs to answer is that can there be two yardsticks for probity and virtue – one for small fish and another for big ones?

The Sahara and Birla diaries certainly do not pass a conclusive verdict on the prime minister’s integrity. But it does bring him under serious suspicion. Propriety demands that the prime minister should suo moto order a credible and independent investigation under the supervision of the Supreme Court. After all, Caesar’s wife must be above suspicion. More so at a time when the prime minister himself has said everyone can be suspected of having “kaala dhan” and a “kaala mann”, and being guilty until proven innocent.

Ashish Khetan is vice chairperson of the Dialogue and Development Commission of the Delhi government.