Bihar: Tej Pratap Yadav's Expulsion from the RJD Has Been a Long Time Coming

Since his political debut, Tej Pratap Yadav has been embarrassing the party with his statements and activities. On the other hand, RJD cadres for long have accepted Tejashwi Yadav as the political heir of Lalu Prasad Yadav.

Patna: After announcing the expulsion of MLA Tej Pratap Yadav from the party, Rashtriya Janata Dal (RJD) has now dropped him from its star campaigners’ list for bypoll in two assembly seats, to be held on October 30.

On October 6, senior RJD leader Shivanand Tiwari in an event said, “Tej Pratap was not with RJD. He expelled himself from the party and formed his own political organisation.”

Thirty-three-year-old Tej Pratap Yadav, who is deeply religious and interested in music, is often in the news for his statements. For instance, while he referred to himself as mythical ‘Krishna’, he described his brother, Tejashwi Yadav, as ‘Arjun’ – meaning his goal was not to acquire power, but to help his brother capture power.

However, after recent events, it has now emerged that all is not well between Tej Pratap and Tejashwi Yadav. These events also highlight that RJD has been sidelining Tej Pratap.

It all started in August this year, when Akash Yadav, the state president of RJD’s student wing and a close aide of Tej Pratap Yadav, was removed from the post, and Gagan Kumar was made the president. Tej Pratap had been looking after the student wing of RJD.

Angered by this, Tej Pratap took a jibe at the party’s president Jagdanand Singh and said that a notice must be given before removing any person from the post of the party, but it was not done in the case of Akash Yadav in violation of the party’s constitution.

However, Jagdanand Singh said that the post of state president of the RJD student wing was vacant, prompting them to appoint Gagan Kumar.

Tej Pratap later floated a new organisation called Chhatra Janshakti Parishad. On the occasion of socialist leader Jai Prakash Narayan’s birth anniversary, he undertook padyatra under the banner of his new party, which has flute as its symbol.

Most of the regional parties in the country are personality-centric, and often there are family disputes over political succession. Many such examples can be witnessed in south India.

Also read: NDA May Have Retained Bihar, But Tejashwi Yadav Is the New Star of Indian Politics

In Uttar Pradesh as well, there was a tug of war between Akhilesh Yadav and his uncle Shivpal Yadav in the Samajwadi Party. Recently, the succession battle in the Bihar-based Lok Janshakti Party (LJP) led to the division in the party. Chirag Paswan’s uncle Pashupatinath Paras separated from LJP and floated his own party. Paras even joined the Narendra Modi cabinet. So, the succession battle between Tej Pratap and Tejashwi Yadav is expected.

However, it has long been obvious that the Lalu family and the RJD workers have chosen Tejashwi Yadav as their political heir. In the last two assembly elections, the party fought under the leadership of Tejashwi Yadav, and he has made a significant mark. In such a situation, Tej Pratap’s displeasure will not have much political impact on RJD, political analysts and RJD leaders believe.

One RJD leader told The Wire on the condition of anonymity, “If he wanted power share in the party, then he should have strengthened the party to prove his ability. But he didn’t do that. Instead, he made statements which were objectionable and embarrassed the party.”

“Tejashwi has dedicated himself to the party and RJD workers have chosen him as their leader,” he added.

Since the time of his debut in politics, he has been embarrassing the party time and again.

In the 2019 general elections when RJD decided to give a party ticket to Chandrika Rai, his father-in-law, from Saran, he revolted and said that if Chandrika Rai was given the ticket, then he would fight against him independently.

In the 2020 assembly elections Tej Pratap demanded four tickets for his loyalists, but that demand was turned down by Jagdanand Singh.

He also criticised Jagdanand Singh multiple times, causing embarrassment to the party. In February this year, he said that Jagdanand Singh was working like a dictator and not meeting party workers.

In July, he called Singh “Hitler” at a public meeting where the latter was also present on the stage. It was learnt that Singh had felt humiliated and sent a resignation letter to Lalu Yadav, but it was not accepted.

Last year, before the Bihar assembly election, he made caustic remarks against former Union minister and tallest socialist leader Raghuvansh Prasad Singh when he had resigned from the party’s vice-president post.

Tej Pratap Yadav had said, “RJD is an ocean and Singh is like a mug of water whose coming/going will have no impact on the party.”

Raghuvansh Prasad Singh was very close to Lalu Yadav. Tej Pratap’s remark was so embarrassing that Lalu had called him to RIMS in Ranchi, Jharkhand, where he was undergoing treatment. It was believed that Lalu had scolded him for his objectionable remarks against Raghuvansh Prasad Singh. But, the damage was already done by then. Referring to Tej Pratap’s remarks, BJP and JDU criticised the Lalu family and tried to project them as ‘humiliation’ against the Rajput community. 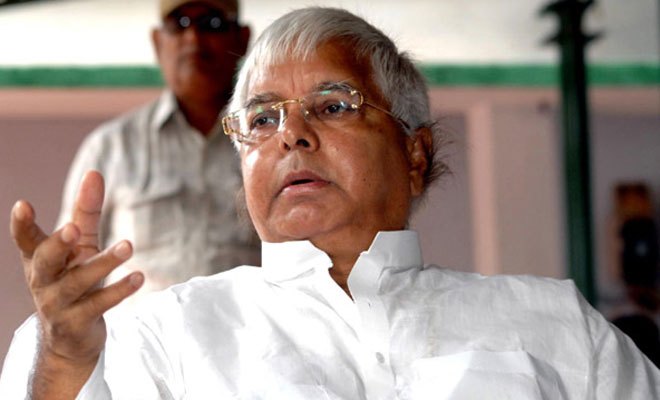 Recently, Tej Pratap Yadav went to Delhi to meet Lalu Prasad Yadav, who is currently staying at the house of Misa Bharti, Lalu’s daughter. But, reportedly he was not allowed to meet Lalu. He had to return in vain. After returning to Patna, he alleged that Lalu Prasad Yadav had been kept hostage in Delhi and he was not being allowed to come to Patna.

Responding to this, Tejashwi Yadav had asked as to who could hold hostage a leader like Lalu Yadav? “He will return to Patna soon,” Tejashwi had said.

All these remarks of Tej Pratap have caused huge embarrassment to the party and provided BJP with opportunities to make scathing attacks against the Lalu family.

Political analyst Mahendra Suman told The Wire, “Perhaps RJD leadership has sensed that if Tej Pratap remains active in the party, he will continue to embarrass his party. This is why party leadership has started sidelining him.”

However, there has been no official statement from the RJD that Tej Pratap has been expelled from the party. But there are some indications, which point to the strategies of RJD against Tej Pratap.

He has been sidelined from the party’s day-to-day activities. Apart from that, he has been kept away from bypoll campaigning and planning for two assembly seats. On October 7, RJD released a list of 20 star campaigners for bypolls, but the name of Tej Pratap was missing.

Sharing this list, Tej Pratap Yadav wrote on Facebook, “It is ok that my name is not in the state campaigners list, but names of my mother and elder should have been included in the list. Women of Bihar will not forgive this.”

Tej Pratap Yadav alleged that Tejashwi Yadav’s advisor Sanjay Yadav, who is of Haryana origin, had created a rift between him and Tejashwi.

A senior RJD leader said on condition of anonymity, “It is necessary for the party that Tej Pratap should be shown the way out. If Tej Pratap is thrown out of the party, his statements will not have any impact on RJD. Then we can easily distance the party from his statements. But if he remains in the party and continues to make controversial statements, they will cause a lot of damage to the party.”

Patna-based journalist Dipak Mishra said, “The strategy of RJD is to completely sideline Tej Pratap as he will not be allowed to form his own political party as long as Lalu Yadav is alive.”

Modi tweeted, “Tej Pratap had created a youth support base, which may disturb his contender in the party’s power war. If Lalu Prasad has guts, he should announce about the dismissal of Tej Pratap from the party.”

BJP spokesperson Nikhil Anand reacted by saying Lalu Prasad was a “messiah of social justice but he has not done justice to his own family”.

Anand said, “RJD supremo did not consider seniority in his family and forcibly kept his elder daughter Misa Bharti and elder son Tej Pratap out of family and politics, and handed over the political legacy to his younger son Tejashwi Yadav.”

In August, Sushil Modi praised Tej Pratap by saying that Tej Pratap had adopted the same communication technique which made his father popular. “Tej Pratap too is becoming popular among his supporters. Those who have issues with Tej Pratap are trying to sideline him,” Modi said.

By doing this BJP wants the RJD fragmented and eventually bring about a division in Yadav votes, which are still predominantly behind RJD.

Journalist Dipak Mishra told The Wire, “Tej Pratap has no political value. So, he can’t have much impact electorally. This is because Yadav voters have accepted Tejashwi Yadav as their leader.”

“Now, if Tej Pratap decides to go to the BJP, I don’t think the saffron party will accommodate him. We know that BJP is the main contender against RJD, so it will lead to confusion between Tej Pratap and Tejashwi by siding with Tej Pratap. But it is not going to gain anything electorally from Tej Pratap.”