Tejashwi Yadav brought the four legislators to the state assembly and informed speaker Vijay Kumar Sinha about their formal decision to break away from the Asaduddin Owaisi-led party. 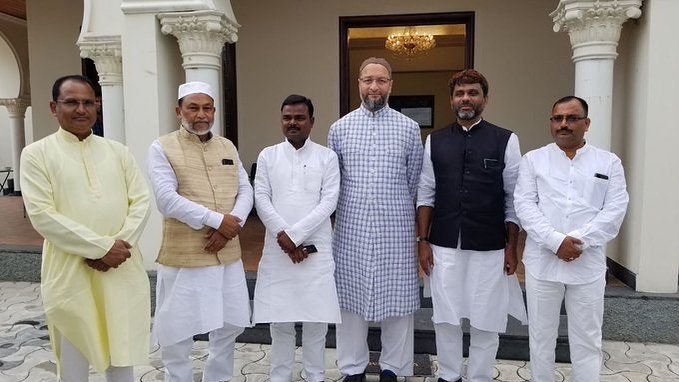 Leader of the opposition Tejashwi Yadav brought the four legislators to the state assembly, driving the car himself, and met speaker Vijay Kumar Sinha to inform him about their formal decision to break away from the Asaduddin Owaisi-led party and merge with the RJD.

Since more than two-thirds of AIMIM’s Bihar legislature party has decided to merge with another party, the defecting MLAs will not invite provisions of the anti-defection law.

AIMIM made a splash in the 2020 Bihar assembly polls by winning five seats but is now left with only Akhtarul Iman, who is the party’s state president.

Also Read: Why AIMIM Is Unlikely to Emerge as a Major Force in the Bihar Elections

All the five seats that the AIMIM had won fall under the Kishanganj and Araria Lok Sabha constituencies, which have the highest concentration of Muslim population in Bihar.

Notably, Jokihat MLA Shahnawaz Alam happens to be the son of late Mohd Taslimuddin, an RJD veteran and a former Union minister. Alam made a successful election debut in a by-poll in 2018, when he contested on an RJD ticket. He quit the party two years later, when he was denied a ticket in the 2020 assembly elections.

The RJD had fielded his elder brother Sarfaraz Alam, who has been in the political wilderness since losing Araria Lok Sabha seat to the BJP in 2019 and who lost to the younger sibling by a margin of less than 10,000 votes.

At a press conference organised to officially announce the development, Tejashwi Yadav underscored that all the four MLAs come from the most impoverished, flood-ravaged region of the state reeling under the apathy of a government that does not care for health, education and other types of public welfare .

Replying to a query, he however denied that the development hinted towards a planned operation by the RJD to raise its stock in Bihar which it has ruled for long and where it shows signs of resurgence after a lean patch.

In the last assembly polls, the RJD won 75 seats, emerging as the single largest party. It won another seat earlier this year when it snatched Bochahan from the NDA in a by-election.

“We want all secular forces to come together and become stronger. And RJD’s role in the fight against communalism cannot be overstated. It is because of us that in Bihar the BJP has never mustered the courage to contest an election on its own,” said Yadav.

“The NDA may have been able to achieve power in Bihar by unscrupulous means but look at the BJP here. It is bearing with a chief minister whose party is a distant third in terms of numbers,” said the RJD leader, referring to the JD(U) which has less than 50 MLAs.

Meanwhile, the BJP, which had been enjoying the status of the single largest party when it weaned away all three MLAs of ousted minister Mukesh Sahni’s Vikassheel Insaan Party a few months ago, raising its strength to 77, testily reacted to the development.

Note: Additional details were added to this article after it was published.