Nitish Kumar Back as Bihar CM, With New Alliance and New Deputy

In less than 24 hours, Nitish has returned as Bihar's chief minister, rekindling an old alliance with the BJP.

Nitish Kumar and Sushil Modi at their swearing in on Thursday. Credit: PTI 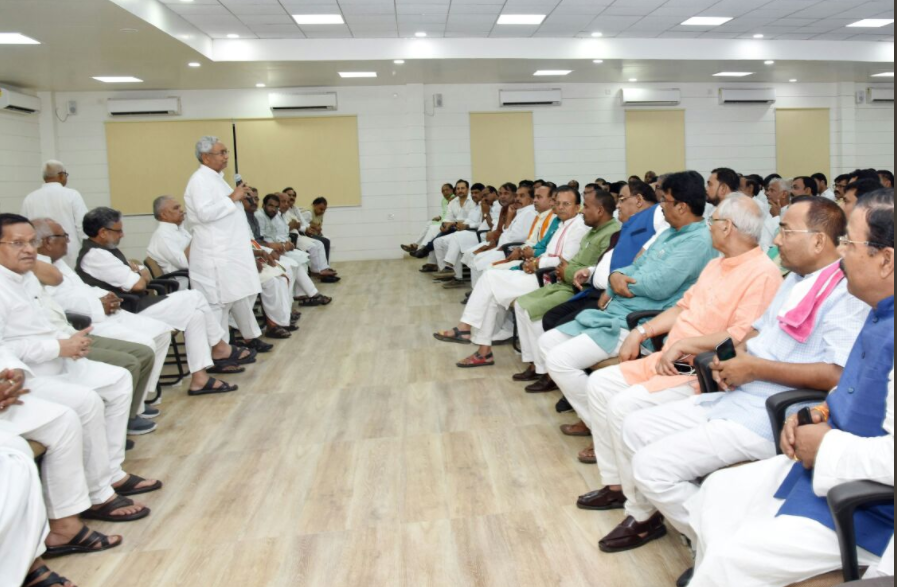 New Delhi: In less than 24 hours, Nitish Kumar has returned as Bihar’s chief minister, rekindling an old alliance with the BJP. Nitish was sworn in at 10 am at Raj Bhavan in Patna by governor Keshari Nath Tripathi. Senior BJP leader in Bihar Sushil Modi has been sworn in as deputy chief minister. He has previously served as Nitish’s deputy from 2005-2013.

The JD(U) has 71 lawmakers in the 243-member state assembly. With the BJP’s support, Nitish’s party now has 124 – one over the halfway mark. A floor test is scheduled to be held on Saturday, July 29.

The “decision to form new government taken in the interest of Bihar, we will take the state to the path of prosperity,” Nitish said after he was sworn in on Thursday. Prime Minister Narendra Modi tweeted congratulating both Nitish and Sushil.

Congress vice president Rahul Gandhi, meanwhile, said that it was known that such a decision was in the making and alleged that there was nothing spontaneous about it. “We knew that it was being planned for the last three to four months,” Gandhi said. “Bihar had given an anti-communal mandate but Nitish Nitish has gone back to them (the BJP) for his personal political gains.”

Former deputy chief minister and Lalu Prasad Yadav’s son Tejashwi Yadav met state governor Keshri Nath Tripathi on Thursday morning, echoing Gandhi’s view that this decision was part of a longer plan. He registered protest that the RJD – the single-largest party in the Bihar assembly – had not been invited to form the government. “RJD being the single largest party should have been invited to form the government. We are taking legal advice and will move court against the governor’s decision,” he told reporters after the meeting.

He said the people of Bihar had given the grand alliance the mandate to run its government for 5 years which Nitish “betrayed”.

Nitish had tendered his resignation last evening after RJD chief Lalu had insisted his son Tejashwi would not resign as the deputy chief minister over alleged corruption charges. The CBI had filed a FIR against Tejashwi, naming him as an accused in the land-for-hotels corruption case.

Nitish’s resignation as the chief minister of Bihar has drawn the curtain on the two-year-long mahagathbandhan between the JD(U), RJD and the Congress. 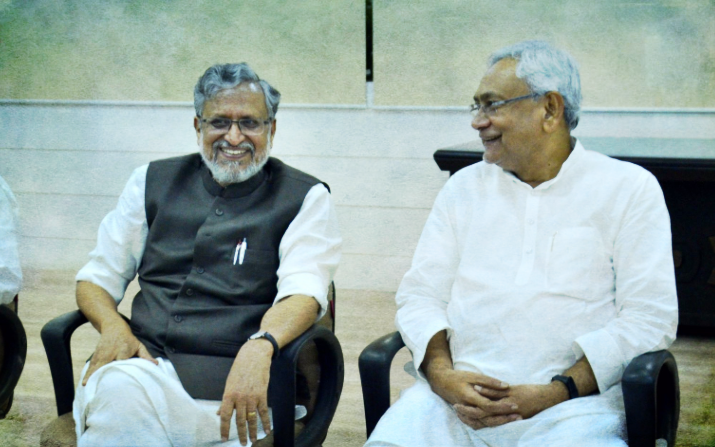 Nitish Kumar and Sushil Modi at their swearing in on Thursday. Credit: PTI

However, Lalu Prasad did not take too kindly to the forced collapse of the government. Addressing the media from his residence in Patna, he said that he had asked Nitish to sort out their differences and told him that the corruption cases were false. “Nitish [Nitish] wanted an RSS free India.”

#WATCH Live from Bihar: Lalu Yadav addresses media at his residence in Patna

The RJD chief added that Nitish’s resignation was “nothing but a drama” and he had resigned not because of the corruption charges against Tejashwi but because there was a “murder charge going against him under section 302.”

After tendering his resignation last night, Nitish said he had made the decision in the interest of Bihar. He further added that he had not demanded anybody’s resignation but wanted Lalu Prasad and Tejashwi to come clean on the allegations leveled against them by the CBI. “Situation was becoming increasingly difficult for me to continue. We spoke to Rahul Gandhi, but nothing worked out,” Nitish said.

Nitish’s JD(U) party was a NDA member during the Vajpayee years, with the JD(U)-BJP running an alliance government in Bihar form 2005 to 2013. Nitish had split with the NDA at that time over the BJP’s decision to field Narendra Modi as its prime ministerial candidate in the 2014 Lok Sabha polls.