Tejashwi Yadav, the Leader, Has Arrived

What once looked like a one-sided election has turned into a seat-by-seat contest. 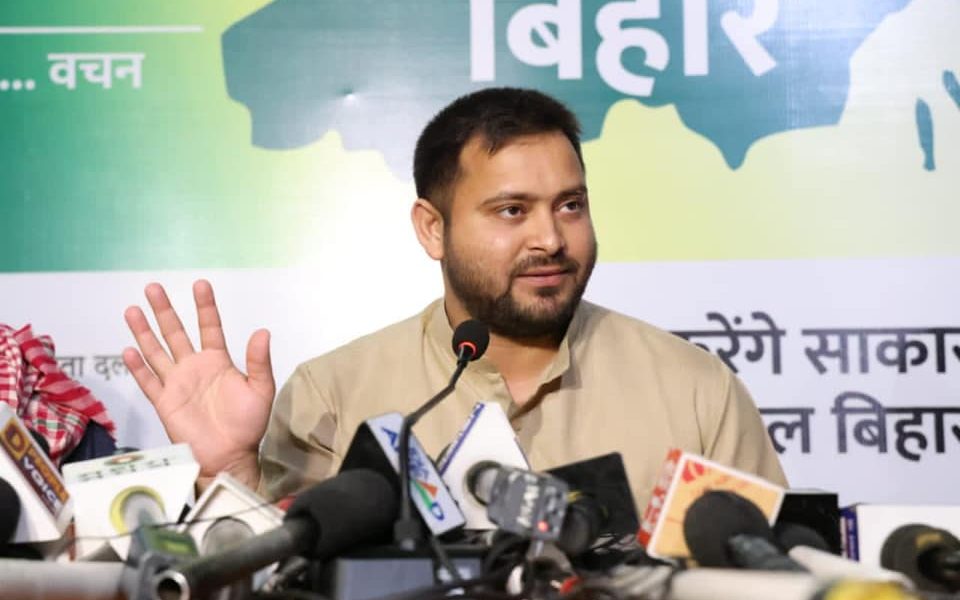 If the polls are to be believed, Tejashwi Yadav could be the next chief minister of Bihar. Photo: Facebook/Tejashwi Yadav

The Bihar 2020 assembly elections began on a rather dull note. A majority of the analysts believed that the National Democratic Alliance was going to make a comeback, and the Rashtriya Janata Dal-led Mahagathbandhan (Grand Alliance) would either fail to take shape, or not put up a strong fight even if it materialises.

“Chunav to Nitish-Bhajpa jite huye hain, Laluji bahar hote to aur baat thi (Nitish-BJP have already won, it would have been different had Laluji been out of jail)” was an often-repeated statement, even from common respondents, who never failed to admit that there is strong anti-incumbency against Nitish Kumar, especially due to lockdown woes and floods. Most of the respondents also said that while Nitish’s first and second terms were marked by improvements in roads, electricity and law and order, the third term has been a damp affair so far. “Par vikalp nahin hai, Tejahswi ko log abhi neta nahin maan rahe (But there is no alternative, people are not ready to consider Tejaswi a leader as of now),” maintained most of them.

One month into the campaign, and things can’t be more different. While the Mahagathbandhan did take shape, the NDA experienced a jolt as the Lok Janashakti Party decided to go solo and launch severe attacks on Nitish. Chirag Paswan made serious attempts to poach ‘upper’-caste votes away from the Janata Dal (United) by fielding candidates – mostly upper caste – in all constituencies where Nitish’s party is contesting, and started giving the impression that the Bharatiya Janata Party is complicit in this game to get rid of Nitish.

However, the Mahagathbandhan became the biggest beneficiary of this sentiment as it succeeded in putting up a united house against perceived disunity in the NDA. And its campaign promise of 10 lakh jobs charged the youth voters of the state whose unemployment rate is above the national average and job-related migration is stretching across generations. Though the BJP and JD(U) initially tried to write off Tejashwi’s job promise, calling it impractical, the scale of popular response around it forced the BJP to change stance and promise 19 lakh jobs if returned to power. The Mahagathbandhan campaign was clearly succeeding in putting the NDA on the defensive, and that was verified by data as well.

If the CSDS-Lokniti pre-poll survey (conducted well before the Mahagathbandhan started getting more traction) is to be believed, Tejashwi is only four points short of equaling Nitish as the people’s chief ministerial choice, and while the NDA’s vote share is expected to decline, that of the Mahagathbandhan is set to increase. It also says that popularity of both chief minister Nitish and Prime Minister Narendra Modi has decreased and that majority of respondents did not want to give a second term to Nitish.

Though the survey still predicts an easy win for NDA with six percentage point lead over the Mahagathbandhan, the actual situation is far less certain as one in every four voters said they are still undecided or can switch sides towards the end. Analysts have changed tones now, accepting that it is a seat-by-seat contest where NDA’s previously perceived lead is waning by the day. Clearly, nobody is significantly missing Lalu now.

In 2010, RJD contested the assembly elections in alliance with the LJP under the command of Lalu Yadav but managed to win only 22 seats. This time, while some analysts hope that the Mahagathbandhan may cross three-digit mark, even the most cynical surveys are predicting RJD to win at least 60 seats. By this standard, Tejashwi has succeeded in improving the prospects of his party even in comparison to his father and the reasons for this lie in the different leadership styles of Lalu and Tejashwi. While his father has always been perceived as arrogant, stubborn and rustic, Tejashwi is perceived as an accommodative, forward-looking and suave leader.

Also read: Bihar: In His Bastion of Raghopur, Tejashwi Yadav Looks Set For an Easy Win

Another remarkable difference is the lack of hostility against Tejashwi among non-Mahagathbandhan voters, when compared with Lalu. While Lalu championed aggressive backwardism and open hostility towards upper castes, Tejashwi has avoided falling into the trap and getting branded as a leader of the OBCs.

His recent statements around the need for ensuring arthik nyay or economic justice mean an increased emphasis on jobs and economy, as opposed to Lalu’s overkill around social justice symbolism. His attempts at reaching out to different allies with mass bases among the Mahadalits and rural poor – especially Left parties like the CPI(ML) – is also in stark contrast with Lalu’s brand of politics. Lalu never left an opportunity to attack the ML, and under his leadership RJD strongmen like Shahabuddin launched a bloody war to liquidate ML’s leadership in the Siwan region. Realising that ML’s mass base is socio-economically “alliable” with that of RJD, Tejaswi did a reverse of his father, going an extra mile to ensure ML joins the Mahagathbandhan even if it meant sacrificing some of the strong RJD seats.

Further, his attempts to make jobs and employment a main election plank has attracted low-key appreciation from the youth even among NDA voters, as a majority of respondents in the CSDS survey believed that the RJD is fighting elections on the issue of jobs. And NDA’s attempts to associate him with his widespread corruption and misrule during Lalu’s rule is simply not working, as charges of father’s misdeeds are not sticking to the son, who has so far succeeded in maintaining a clean image.

Also read: Is Bihar in For a Surprise With the Surge in Turnout at Opposition Rallies?

That surely doesn’t mean that upper caste youth, who form a sizeable chunk of the unemployed-educated population of Bihar, will vote for the Mahagathbandhan due to the job issue. However, it does mean that their opposition to Tejaswi’s RJD won’t be as vocal and aggressive as that of their parents against Lalu’s RJD. This softening of stances matters a lot in politics and the credit for this should definitely go to Tejaswi’s leadership.

Exploring changing social dynamics and alliances behind the turnaround

But is this whole change in terms of the NDA’s weakening in a previously thought one-sided election and the Mahagathbandhan’s rise driven by Tejashwi’s leadership alone, or are there bigger forces at work? For in a state like Bihar, where assembly elections are driven primarily by identity and caste-based mobilisations and affinities, NDA surely had a lead.

After all, with EBCs-Mahadalits and majority women voters backing Nitish and upper castes-Baniyas backing BJP, it commanded a bigger share of the support base than the Mahagathbandhan, which only had majority support of Muslims and Yadavs, with spattering of Mahadalits-EBCs due to the Left in selected pockets. Are the predictions of a turnaround just a media hype then, totally unrelated to the ground reality? The answer is, no.

As per recent surveys and reports, a change of perception is more visible among the EBCs and Mahadalits, who have started warming up to the Mahagathbandhan. But why will these sections – perceived as “cautious voters” who are averse to risk-taking against “aspirational” and more self-confident Yadavs and upper castes – abandon Nitish? Their memory of the past makes them apprehensive about both Yadav dominance (characterised by RJD rule) and upper caste dominance (characterised by zamindari days and the phase of caste armies). And since in Nitish they find a perfect bulwark which could keep both of these extremes under check, why will they even think of deserting him? The answer lies in the perceived “treachery” against Nitish by the BJP, which is having a severe impact on the JD(U)’s mass base.

For when this “cautious” Nitish vote bank starts getting confused signals from the NDA, that the BJP may altogether ditch Nitish via the LJP, the fear of a return of upper-caste dominance resurfaces in their psyche. And in the socio-political history of Bihar, pichdawad or “backwardism” has always acted as a cementing force in bringing together OBCs, EBCs and Mahadalits with minorities against upper caste dominance. Additionally, the “cautious” sections are comparatively less apprehensive of the “Yadav dominance” and surprisingly, it is Nitish who has contributed to this change by aligning with the RJD in 2015. A softer image of Tejashwi as opposed to Lalu further acts as a bonus.

It is the fallout of this changed social dynamic that is leading to altered electoral equations in Bihar, and the BJP has nobody to blame for this other than itself. A weaker Nitish, in place of helping it arrive at the helm of affairs in the state, is actually helping the Mahagathbandhan steal the show from the NDA.

The NDA still has a thin edge over the Mahagathbandhan and towards the end, if it succeeds in putting its house in order, it could still manage to retain the majority of EBC-Mahadalit support via Nitish and clinch a victory. However, things are so fluid on the ground that nothing is certain in Bihar, and all possibilities are open. As the Tejashwi-led Mahagathbandhan continues to hammer upon the perceived “internal rift” in the NDA to poach away the JD(U) vote bank, this once one-sided elections continues turning into a seat-by-seat contest too close to call.

And this alone signifies that Tejashwi as a leader has arrived.

Rajan Pandey teaches political science at Royal Global University in Guwahati and is the co-author of Battleground UP: Politics in the Land of Ram.