Bihar Elections: What the LJP Hopes to Achieve By Walking Out of the NDA

With the party choosing to continue to support the BJP, speculations are rife that the saffron party has orchestrated the move to weaken Nitish Kumar's bargaining power. 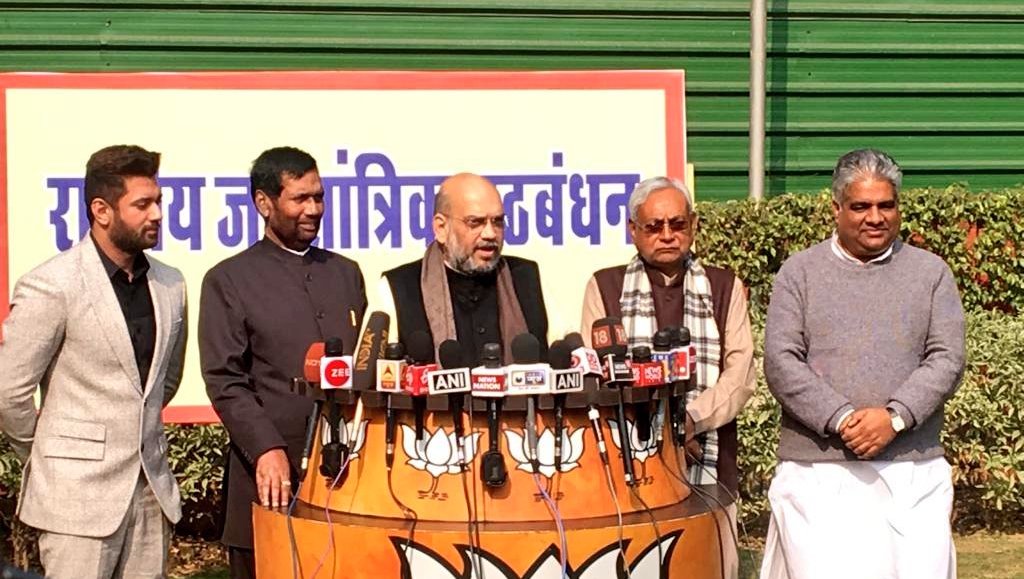 Patna: In a significant political development, the Lok Janshakti Party (LJP) has walked out of the National Grand Alliance (NDA) but will remain with the BJP and fight against the Janata Dal (United) [JD(U)].

The decision came after the party’s Central Parliamentary Board meeting on Sunday.

A press release issued by LJP reads, “There is a strong alliance between the Bharatiya Janata Party and the LJP at the national level and in the Lok Sabha elections. Due to ideological differences with Janata Dal United at the state level and in the alliance, in the assembly elections, the Lok Janshakti Party in Bihar has decided to walk out from the alliance and contest the election alone. In many seats, there can be an ideological fight with JDU so that voters of those seats can decide which candidate is better for the interest of Bihar.”

In the press release, the LJP also expressed confidence that a BJP-LJP government will be formed after the elections.

Hours after the press release, Chirag Paswan, party chief and MP, posted a video on his Facebook page where he talks about his ‘Bihar 1st Bihari 1st’ campaign.

Although speculations were doing the rounds for a few days that the party could break away from the NDA, it was believed that he was attacking the JD(U) as a pressure tactic to get more seats.

Four days ago, BJP national president J.P. Nadda and general secretary Bhupendra Yadav had said that the JD(U), LJP and BJP will contest the election together. After this statement, it was believed that issues between the JD(U) and LJP were sorted out. But, on Sunday, the LJP’s announcement surprised the political pundits.

The manner in which the LJP announced its decision and expressed full faith in the BJP have prompted speculation that the saffron party is operating things from behind the curtain. The BJP’s mysterious silence is only strengthening such apprehensions.

For a long time, leaders of the state unit of the BJP have been saying that Nitish Kumar should drop out as the candidate for chief minister to make way for the next generation. Few other leaders are pressing its national leadership to go it alone.

Observers say that the anti-incumbency sentiment in the state is aimed towards Nitish, but not the BJP. Hence the latter is pushing the LJP to go solo, so that the anti-Nitish votes go to the LJP and not to the opposition alliance led by Rashtriya Janata Dal and Congress.

The exit of Rashtriya Lok Samta Party (RLSP) and Vikasheel Insan Party from the opposition alliance is also being seen as a ploy by the BJP to split the anti-incumbency votes.

What does Chirag want and what can he achieve from fighting solo?

The LJP’s history so far suggests that it is keen to be part of the Central government. It has not prioritised forming a government or becoming a part of the government in Bihar, except for one failed attempt to form an NDA government by defecting in February 2005.

In such a situation, experts believe that Chirag Paswan’s step will definitely benefit the BJP. But, Bihar is not his priority. Perhaps the young leader is angry because of some decisions made by Nitish Kumar and he wants to damage the chief minister electorally. One such issue is leaving out the Paswan and Pasi communities from the Mahadalit Commission which was formed in 2007. However, in 2017 Kumar included the Paswan community in the commission.

An LJP leader told The Wire on the condition of anonymity, “We will field candidates against the JD(U) and try to inflict maximum damage on Nitish. His tenure is full of corruption. Police and administrative officials are not listening to our grievances. The people are angry with Nitish Kumar.”

Also Read: Can Chirag Paswan Do to Nitish Kumar What His Father Had Done to Lalu Prasad in 2005?

Political analyst Mahendra Suman says that the LJP’s priority has always been to be part of the Central government. “The manner in which the BJP and the prime minister have been praised in its press release, it is clear that it has completely bowed down to the BJP. Any party which bows down to its ally cannot bargain much.”

“By putting candidates against the JD(U), Chirag wants to cause maximum harm to it. If this happens and the JD(U) gets fewer seats than the BJP, then Nitish’s problems will increase. He will not have the upper hand. If Chirag gets good numbers, he will play the role of kingmaker,” he told The Wire.

“Given the past record of the LJP, Chirag may be aiming to secure his position in the Central cabinet,” Suman said.

Deepak Mishra, a Patna-based senior journalist, believes that Chirag may have the larger picture of the 2025 assembly elections in his mind.

“In Bihar, the BJP is not introducing new faces. The JD(U) does not have any young leaders. The RJD is led by Tejashwi Yadav, against whom there are grumblings within the party. So, maybe Chirag thinks that in 2025, there will be a vacuum and he can fill that,” he said.

But caste arithmetics do not favour Chirag Paswan. The Paswan community, his core vote bank, consists of only 4-6% of the total population. In the 2010 Bihar assembly election, the LJP fought in an alliance with the BJP and got 6.75% of the votes and won only three seats. In the 2015 election, its vote share dipped to 4.8% and it won only two seats.

Meanwhile, with the exit of the LJP from the NDA, a new seat sharing formula is on the verge of being finalised. It is said that the BJP and JDU will contest 119 seats each and five seats will be left for the Hindustani Awam Morcha (Secular). 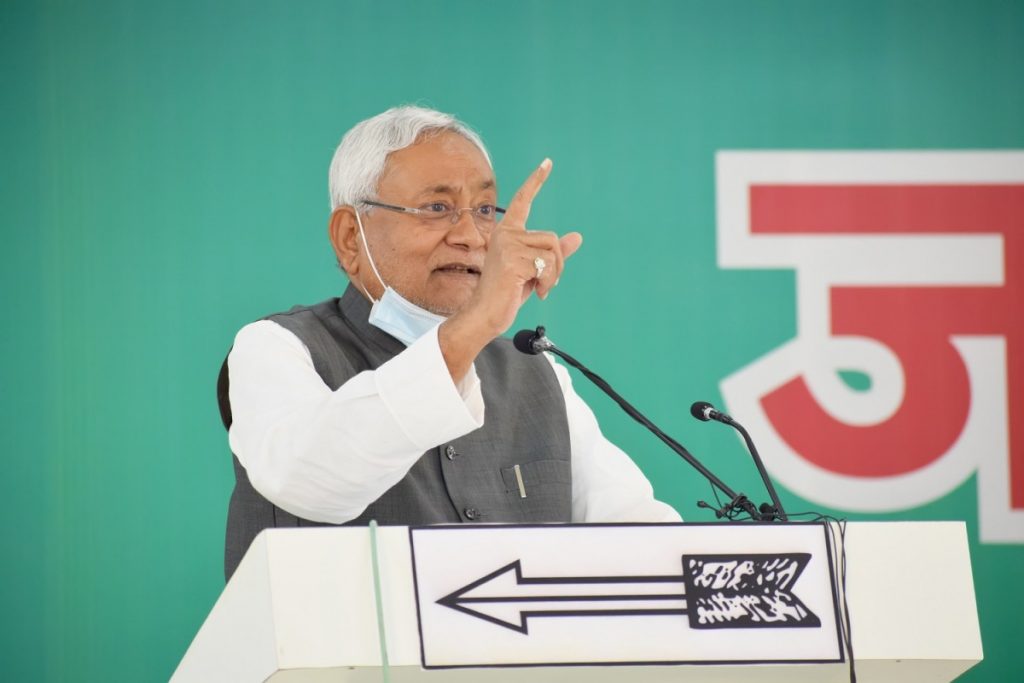 Seats sharing in the grand alliance

The opposition’s Mahagathbandhan or grand alliance consisted of nine parties until a few days ago. When the press conference was held on Saturday evening to announce the seat sharing formula, only six parties remained. Mukesh Sahni, the head of the Vikas Insan Party, left the press conference midway and accused Tejashwi Yadav of ‘backstabbing’. The alliance now has the RJD, Congress and the left parties [CPI(ML), CPI(M) and CPI].

All the coalition partners also unanimously accepted Tejashwi Yadav as the CM candidate.

Also Read: Will an RJD-Congress-Left Alliance Ride the Anti-Incumbency Wave in Bihar?

According to RJD sources, given the past performance of the Congress, it will contest the seats from where the BJP and JD(U) have been winning.

It is believed that not taking proactive steps to accommodate HAM(S), VIP and the RLSP within the alliance was part of a political strategy. These small parties do not have a huge support base, so their departure will have little impact on the alliance, insiders believe.

The CPI (ML) contested alone and won three seats with 1.5% of the votes.

Patna-based senior journalist Deepak Mishra told The Wire that the left parties have a strong cadre base. “They also have a presence among Dalit and backward sections of the society. The RJD will benefit from this,” he said. 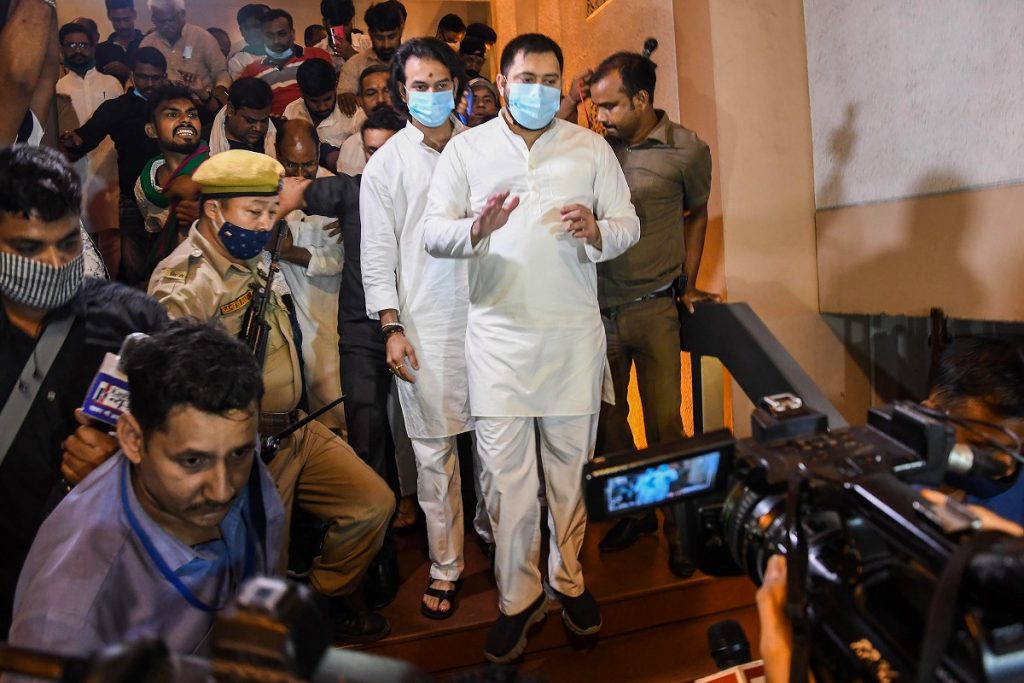 The RLSP has aligned with the Bahujan Samaj Party and the Janata Party Socialist. On the other hand, the Jan Adhikar Party chief and former MP Pappu Yadav has formed a Progressive Democratic Alliance in association with Prakash Ambedkar’s party, the Vanchit Bahujan Aghadi.

Similarly, the All India Majlis-e-Ittihad Muslimeen (AIMIM) has formed an alliance with Samajwadi Janata Dal (Democratic) in Seemanchal. Bihar AIMIM president Akhtarul Iman told The Wire, “We are in talks with some other parties.

Apart from these alliances, the Plurals Party is also in the fray. Its chief Pushpam Priya Chaudhary had announced herself as the chief ministerial candidate in newspaper advertisements in March this year. The party will contest all the 243 seats, with Chaudhary contesting two – Bisfi and Bankipur.

Experts say that elections in Bihar have always been bipolar and rule out the prospects of these alliances. However, if these parties win a respectable tally of seats, they may have a say in the event of a hung verdict, when post-poll alliances will come into play.