Multiple rallies were held across the state on Friday. 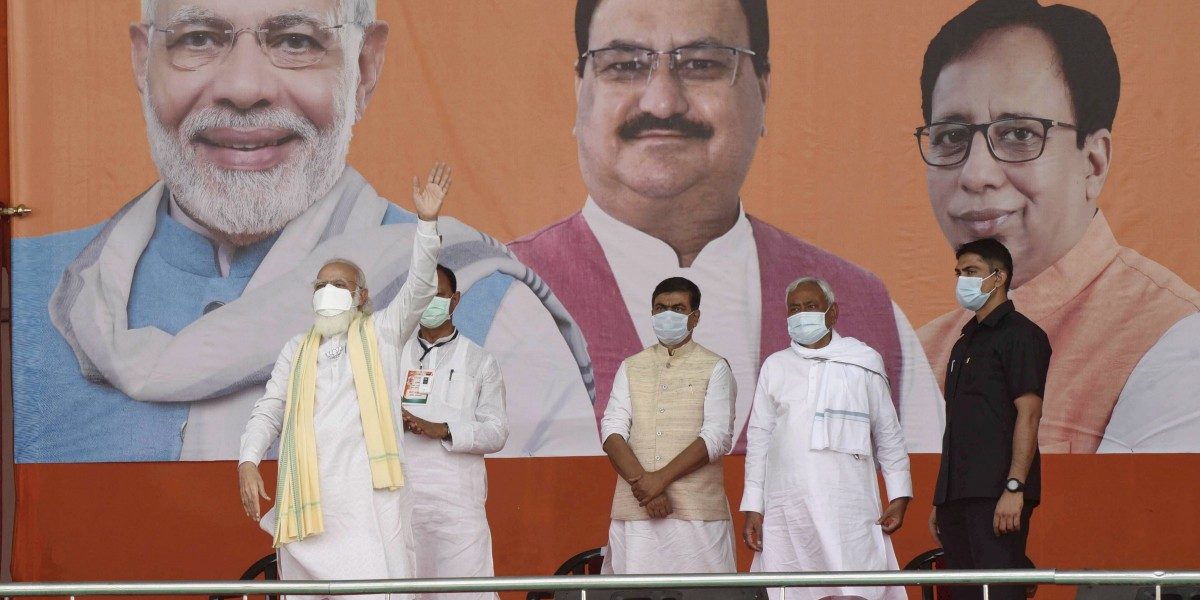 New Delhi: Bihar saw an intense day of campaigning on Friday, as voting for the first phase of the state assembly elections looms closer. Prime Minister Narendra Modi launched his campaign with three back-to-back rallies, while Congress leader Rahul Gandhi hit out at Modi for his “lies” and “false promises”.

The state is voting in three phases on October 28, November 3 and November 7, and the results will be announced on November 10.

In Modi’s speeches on Friday, he castigated the opposition over its stand on the repeal of Article 370 and talked of the 15-year reign of “crime” and “loot” under the RJD. He addressed rallies in Rohtas, Gaya and Bhagalpur districts, where he shared the stage with chief minister Nitish Kumar and accused the Congress-led opposition of adopting a contrarian position on “any step taken in national interest”.

The prime minister brought up the dilution of Article 370, the law against instant triple talaq, commencement of construction of the Ayodhya Ram temple, and military operations at the borders among the steps taken in national interest which the opposition has questioned.

“You tell me, was not the country waiting for Article 370 to be scrapped? When the NDA government did that, they are talking about restoring the provision if they are back in power. Still they have the audacity to come and seek votes in Bihar which sends its sons and daughters to protect the nation. Is it not an insult to the people of Bihar?” he told an election rally at Dehri-on-Sone in Rohtas district.

Referring to the Galwan Valley clash with Chinese troops, Modi said the sons of Bihar laid down their lives for the tricolour but did not let “Mother India bow her head”. The soldiers of Bihar were also martyred in the Pulwama attack, he said.

The prime minister began his address at the first rally in Rohtas by paying tributes to late Ram Vilas Paswan, a member of his cabinet, and former Union minister Raghuvansh Prasad Singh who died a month ago shortly after burning bridges with Lalu Prasad’s RJD.

Paswan’s son Chirag, the LJP president who has pulled out of the NDA vowing to dislodge Kumar from power while proclaiming his loyalty to Modi, profusely thanked him for the gesture and tweeted: “As a son, it is natural for me to be moved by the respect and love shown by the Prime Minister for my deceased father”.

Modi did not name Chirag but referred to the “confusion” being sought to be created by some people. “But there is a good trait among Biharis and that is clarity. They don’t get confused,” he said.

Without naming any opposition party, he said their protests against the recent farm reform laws were in fact aimed at “saving” middlemen and brokers in the garb of backing the Minimum Support Price regime and agriculture ‘mandis’. They had spoken the language of middlemen and brokers even when the Rafale fighter aircraft were bought, he said, asserting that “India” will not back off from the decisions it has taken.

While speaking of various development initiatives of the NDA governments at the Centre and in the state, he spoke of frequent heinous crimes like “murders, dacoity and extortion” under the 15-year rule of Lalu Prasad Yadav’s RJD and said people can now live without any fear. “The people of Bihar cannot forget the era when life would come to a standstill after sunset. Today, roads, electricity and lights are there. The biggest thing is that a common man in the state can live without fear,” he said.

Without mentioning the RJD by name, Modi made a series of scathing attacks on the party, asking young voters be mindful of the “chaos and lawlessness of the 1990s” and remarked “Bihar now has electricity, it does not need lantern”, an obvious reference to the poll symbol of Lalu Prasad’s party.

“People used to be wary of buying cars as workers of a political party used to be on the prowl, carrying out kidnappings for ransom. Train travellers used to stay back at the station if they reached their destination in Bihar late in the night. People travelling through the state by road used to spend the journey in fear of abductors who could strike anywhere, any time,” he alleged.

He also took a dig at the promise of 10 lakh government jobs made by Prasad’s son Tejashwi Yadav, the chief ministerial candidate of the 5-party grand alliance. “Can those who look at government jobs as a means for taking bribes ensure creation of jobs?”

Hitting out at the Congress without mentioning it by name, Modi alleged the UPA governments headed by the party stalled Bihar’s development. “For 10 years they vented anger over their defeat in Bihar on the people of the state. They wasted 10 years of Nitish Kumar and did not allow him to work,” the prime minister said.

Modi also expressed delight over opinion polls predicting a win for the NDA, even though many of these have shown that the ruling coalition was ahead of its rivals only by a very thin margin. At his final rally of the day in Bhagalpur, Modi said, “Wherever I have gone, I have sensed that people have made up their mind to vote NDA back to power and bless Nitish babu with another term.”

Congress leader Rahul Gandhi on Friday again accused Prime Minister Narendra Modi of having “insulted” the soldiers with his comment that nobody had intruded into Indian territory in Ladakh, and demanded that he tell the country when the Chinese will “be thrown out”.

Addressing his first rally during the Bihar assembly elections, Gandhi insisted the Chinese army had indeed intruded into Indian territory. “They have seized 1,200 km of our land. But when the Chinese army intruded, why did our prime minister insult our soldiers by saying that nobody entered into the Indian side?” he said.

He also attacked the Centre over the migrant crisis triggered by the pandemic-induced lockdown, alleging when workers from Bihar were being “chased away” from other states the prime minister did nothing to help them.

“He bows before the labourers but does not help them when they need it,” he said. He demanded that the prime minister tell Biharis how many jobs he gave them and when.

In a dig at the BJP’s election promise of 19 lakh jobs in Bihar, Rahul said it was similar to that of depositing Rs 15 lakh in the bank accounts of the people. He alleged that Modi and Nitish broke the backbone of the farmers, and medium and small businesses in the state.

He said that Modi calls himself a nationalist but weakened the country over the last six years. “Economy is suppressed and farmers oppressed,” Gandhi added.

RJD leader Tejashwi Yadav on Friday asserted that his father and party supremo Lalu Prasad will come out of jail on November 9 after securing bail in a fodder scam case, and Nitish will have his farewell as chief minister the next day. The votes for the state assembly polls will be counted on November 10.

Prasad is in judicial custody in Jharkhand capital Ranchi after his conviction in fodder scam cases. He was recently granted bail by the Jharkhand high court in the case related to Chaibasa treasury but could not come out of jail as his bail plea in another case of fraudulent withdrawals from Dumka treasury is being heard.

In his address, Tejashwi accused the Nitish Kumar government of failing to root out corruption, bring industries, provide employment and check migration for livelihood.

“Nitishji, you have got tired. You won’t to able to take care of Bihar,” the 30-year-old Tejashwi told Kumar (69).

He took a jibe at the chief minister for his remark that Bihar lacked industrialisation because it is landlocked, and reaffirmed his commitment of sanctioning 10 lakh government jobs in his first cabinet meeting if the grand alliance comes to power. “Those who didn’t give you jobs, education, health facilities and industries in 15 years will not do so in the next five years as well,” he said. 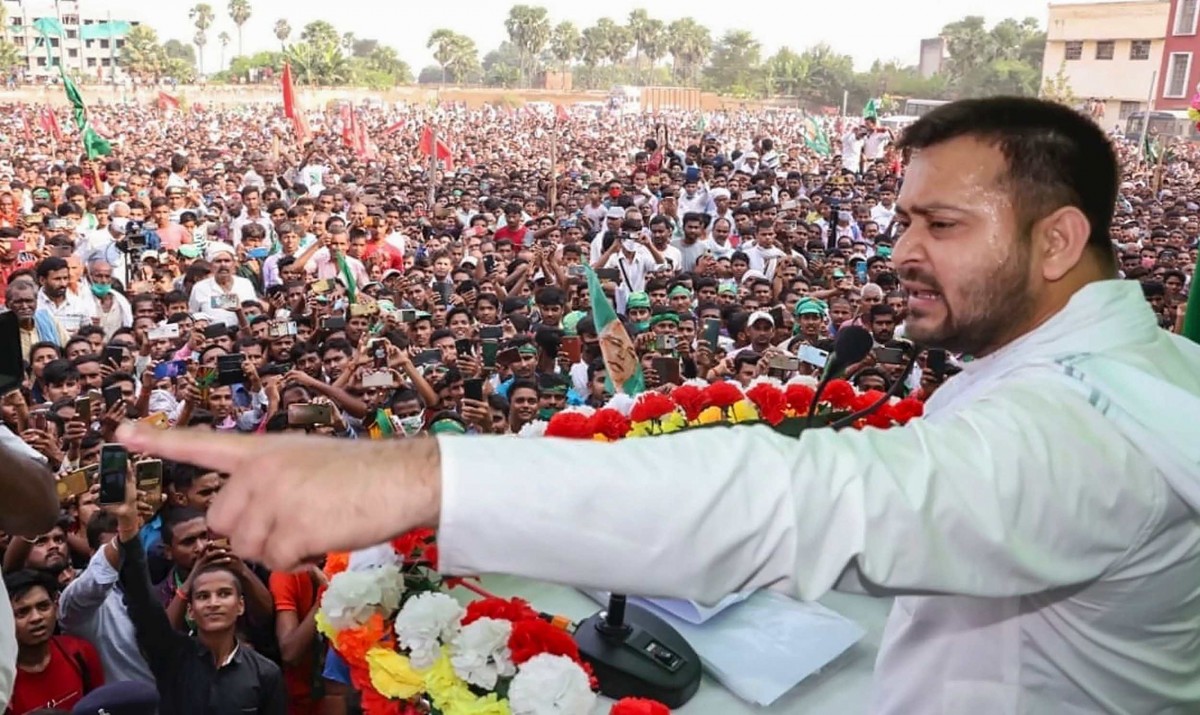 In his address, delivered mostly in Bhojpuri in a tone that appeared a loose copy of his fathers famous style of speech-making, Tejashwi also targeted Modi. “The PM has come to Bihar. I was expecting him to tell when Bihar will get the special state status and a special package. You should have revealed how many government jobs you provided,” he said.

Continuing his tirade against Kumar, the Mahagathbandhans chief ministerial candidate said the JD(U) president did not come out of the CM’s House for 144 days due to the fear of coronavirus. “Coronavirus is still there, but now he is coming out, because he wants votes, wants chair,” he said.

Responding to the NDA’s persistent question about where will he bring the fund from for his promised 10 lakh jobs, Tejashwi said Bihar has a budget of Rs 2.13 lakh crore and the Nitish Kumar government manages to spend just 60% of it. “There still is Rs 80,000 crore left,” he said.

He sought to reach out to voters of every age group with the promise of waiving examination fees and fare for commuting to exam centres, making contractual teachers permanent, and raising the old-age pension to Rs 1,000 from Rs 400. “This fight is not between Nitish and Tejashwi, neither is it between Rahul Gandhi and Narendra Modi. It is a fight between the people and a dictatorial government,” he said.