Given Bhuj's large Muslim population, the prime minister shifted away from his broader campaign tenor and raked up issues with the potential to polarise communities. 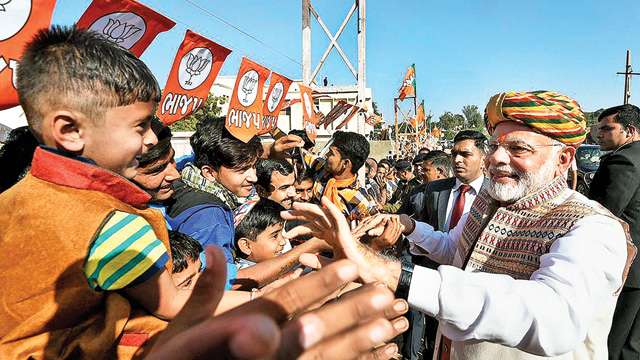 Bhuj, Kachchh: The prime minister kicked off the last leg of his election campaign in Gujarat on Monday (November 27) from Bhuj, the most prominent town in Kachchh, the western-most district of the state bordering Pakistan. By the end of the day, it was clear that the BJP chose Bhuj for tactical reasons.

Although the prime minister invoked his party’s campaign mantra of vikas versus what he called Congress’s caste politics, he singled out Bhuj, his first stop, to raise a stir about Pakistan’s support for Islamist terrorism and India’s military muscularity. The fact that Bhuj has a significant Muslim population and has been witness to several communally-charged elections in the past appear to be the primary reasons for this Hindutva-leaning nationalist speech.

In the other three meetings he addressed – in Dhari in Amreli, Kamrej in Surat and Jasdan in Rajkot, all dominated by hostile Patidars but with a minuscule Muslim population – he attacked the Congress to arouse what the BJP calls “Gujarati pride”. For instance, he talked about his humble origins to take a shot at the recent Youth Congress tweet mocking him for being a “chaiwaala” (tea seller). He also lashed out at the grand old party for its dynastic leadership.

But look at some of the remarks from his speech in Bhuj:

You saw the response when 26/11 happened, and how we reacted to Uri (the military base which was attacked by last year and provoked “surgical strikes” across the LoC by India). This is the difference between their government (the Congress) and ours.

When Pakistan releases one terrorist (Hafiz Saeed), they (the Congress) attack us. When our troops took on the Chinese in Doklam, they (Rahul Gandhi) met and embraced the Chinese ambassador’s views.

And then he went to ask:

I am a son of Gujarat, if someone insults your son, will you forgive him?

Modi used Rahul’s recent tongue-in-cheek tweet, which criticised Modi for failing to prevent Saeed’s release in Pakistan, to try and change the narrative and accuse the Congress of doublespeak on terrorism.

According to unofficial estimates, the population of Muslims in the Bhuj assembly seat is close to 35%. They are considered to be Congress supporters. Most of them are artisans, employed in the small-scale traditional handicraft work that Kachchh is famous for. Cloth art like Bandhej, natural dyeing called Ajrakh, woollen shawls and block printing are the mainstay of the local economy.

While Muslims specialise in dyeing, Bandhej and block printing, the Bunkar community of Dalits produce woollen shawls with intricate embroidery in a long, decentralised manufacturing chain.

The BJP has been trying to woo the Dalits in the region for a long time, by pitching them against their Muslim counterparts. If a majority of Bunkars come under the saffron party’s fold, it would compliment its traditional Hindu support base of Bania, Brahmin, Ahir and Lohana communities in the seat.

Also read: Gujarat Model’s Failure Explains Why the Economy Is a Significant Factor in the Coming Elections

However, in pursuit of this consolidated Hindu vote bank, many concerns of the population are left out. A sizeable chunk of poor Hindus and Muslims, outside the purview of the formal economy and not integral to the political process, live in abysmal conditions in this water-scarce region and work in remote areas mainly as low-paid dairy farmers or sheep breeders.

Problems in the area are aplenty, but they are yet to be noticed by the government. The last few elections in this legislative segment have been communally charged ones, pushing livelihood issues into the background.

Sources in the Congress told The Wire that the last few assembly elections in Bhuj have turned communal and development issues were buried as a result. Because of this, there was a huge dilemma within the party on whether to field a prominent Muslim leader there, or make a relatively less popular Hindu candidate contest. “The idea was to avoid communal polarisation. But in the end, we decided to field our popular leader, who also happens to be a Muslim,” a source said.

Former BJP chief minister of the state Suresh Mehta, who quit the party in 2007, told The Wire that the BJP is primarily responsible for such polarisation. He confirmed that Hindu consolidation is a priority for the party in Bhuj. “The BJP stokes fear of Muslims among Hindus there. Each time, we see the presence of an anti-incumbency sentiment against the BJP in Bhuj but the moment the Congress fields a Muslim candidate, the situation gets polarised.”

In a closely-fought election in 2012, the BJP’s Nimaben Aacharya defeated the Congress’s Amirali Hajihushen Lodhiya by a margin around 9,000 votes. The contest saw the Hindus as a group voting against the Congress, after several BJP leaders made communally-charged speeches.

Mirroring his speech on Monday, then chief minister Modi in his 2013 independence day address at Bhuj had attacked Manmohan Singh for his “soft” policies on Pakistan and China.

The BJP has repeated Aacharya as its candidate and the Congress has fielded another Muslim candidate, Adam P. Chaki, who has been at the forefront of filing several PILs against the state government in the high court. The most noticeable of these is on the government’s controversial decision to hand over the management of a government hospital to the Adani group. 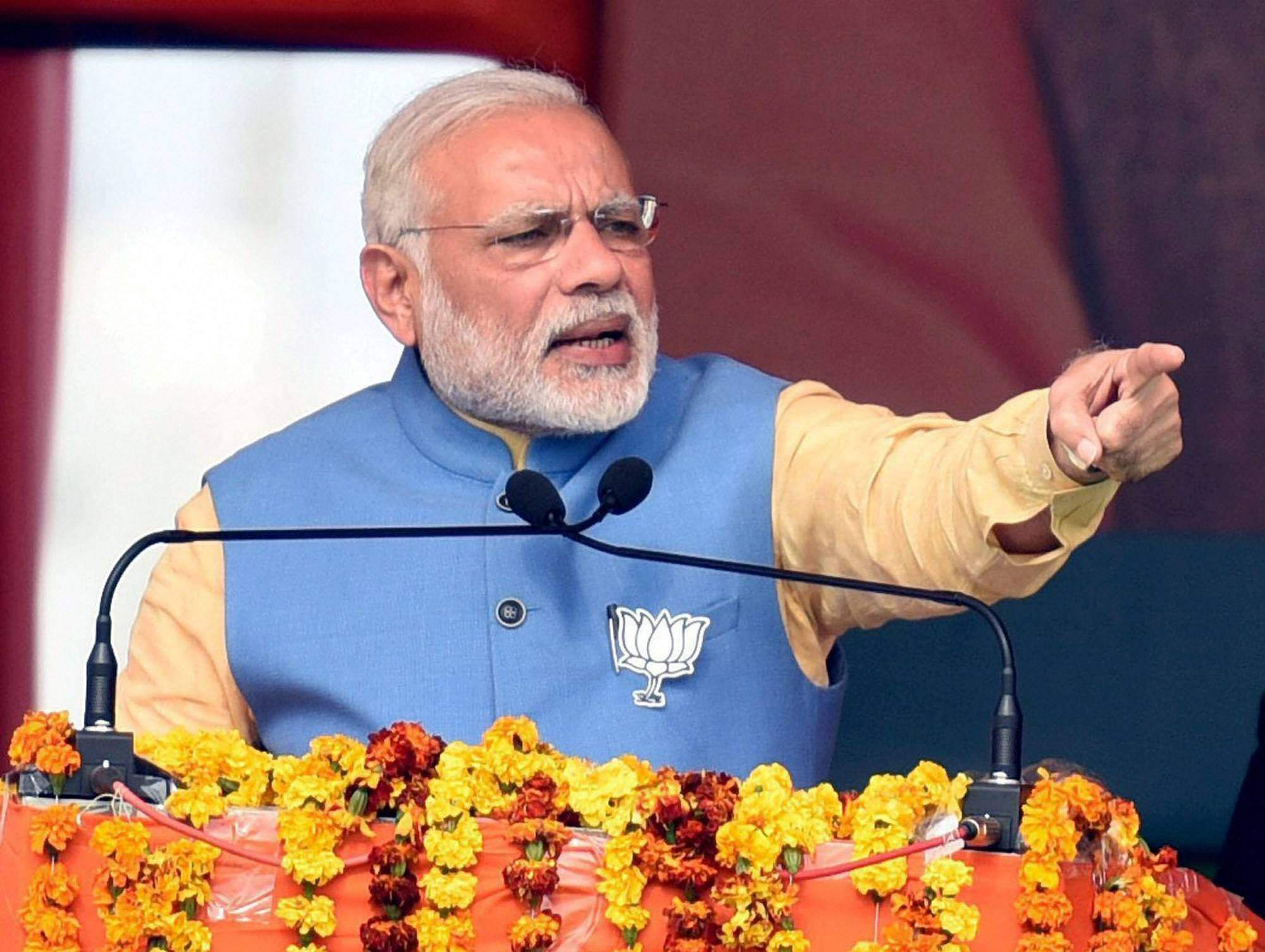 Modi’s use of metaphors in Bhuj was yet another attempt to polarise the electorate on religious lines. Even without directly mentioning Pakistan, Modi brought up Uri, perhaps aiming to remind people of the country’s role in the incursion.

A few Muslims The Wire spoke to were disappointed by the speech. “Why does the prime minister talk about Pakistan and terrorism each time he comes to Bhuj?” asked Md Hanif Khatri, an artisan who does block printing.

Similarly, entrepreneur Md Ismail said, “For the first time, the central government noticed the problems of the handicrafts industry. It has initiated a plan for the handicrafts entrepreneurs to form mega-clusters on the lines of small special economic zones. It is ready to pay Rs 1.5 crore to the cluster if we organise ourselves. Although it does not address many of our problems, yet it will be a big boost for the industry. I would have liked the prime minister to talk about this as his achievement in Bhuj.”

Asked whether he is happy with the new rate of 5% GST on handicrafts, he said, “Barring the complicated process of filing returns, it is okay. At least this government is thinking about us. But why rake up communal sentiment when things are going fine here?”

Also read: Interview – Distress in Gujarat Is Real, Modi Alone May Not Be Able to Do Damage Control

“He should have focussed on his initiatives to turn Kachchh into a tourist destination. It was during his time as the chief minister of the state that the tourist infrastructure was built,” said Md. Zeeshan, a handicraft unit owner.

However, the political logic of the BJP may be a little more complicated than it appears to be. The BJP’s strongest support in the region is among the Lohanas or Thakkars – a substantial population, estimated to be around 20% of the electorate – who are mostly small retailers of handicrafts. If the artisans have benefited from the opening up of the global market for traditional handicrafts, Lohanas have faced losses over the last few years. Most artisans, Muslims and Dalits alike, prefer big orders from garment retailers like FabIndia, Pantaloons, Reliance Trends and other such large brands.

“Earlier, the state-owned cottage emporiums bought most of the stuff, but the big retail industry has now taken over as our client,” Khatri told The Wire.

Since the Hindu nationalist party already knows that a majority of Muslims would not vote for it, colouring the polls with communal overtones has been the most efficient way to deflect immediate issues of both the Hindus and Muslims, and score a victory.

While poor social development indices like the sex ratio, literacy rate, malnourishment level, growing unemployment rate and so on remain unaddressed in Kachchh, religious polarisation continues to remain the most reliable method of mobilisation in the BJP’s scheme of things.