The physical element of politics cannot be underrated. Some words of encouragement, a couple of acts of kindness and a few words of conversation, often change the mind of a hitherto hostile voter. 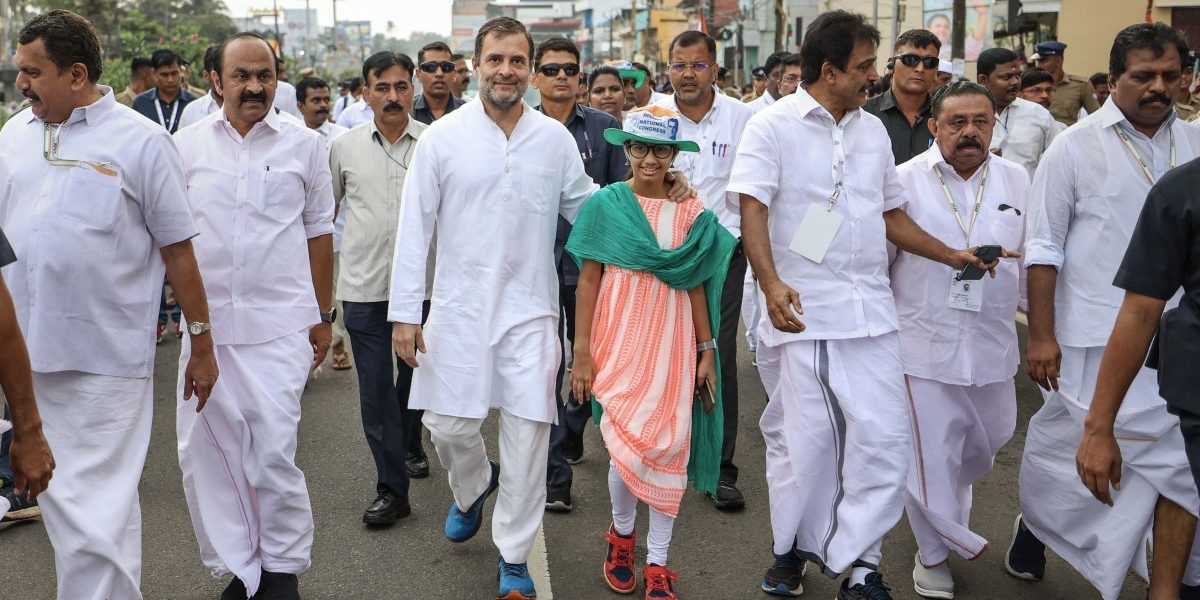 The main function of a political party is to reach out to the people. Despite the millions of words’ worth of op-eds written about the Congress, its problem has never been about the resignation of a few leaders.

The Bharatiya Janata Party (BJP) has put in some effort to paint the Congress leadership as elitist and out of touch. With much of the media, to put it politely, being sympathetic to the ruling party, this perception has been given much play and the corporatisation of the media has made it increasingly hard for the Opposition to get its point across.

The only possible response was a programme of mass contact and direct communication with workers and voters. The Bharat Jodo Yatra, and Rahul Gandhi’s decision to lead it, is just the exercise that was required. Physically daunting, it effectively punctures the BJP’s propaganda against the Congress and the Gandhis.

The initial reactions to the yatra seem positive. This is especially so when one sees the rather disingenuous attempt by the BJP to focus on Rahul Gandhi’s clothes, which was nothing but an attempt to discredit the yatra. When a political initiative works, the machinations of the other side tend to rebound. This attempt ended up bringing the yatra much more attention at an early stage than the Congress would perhaps have hoped for.

Also read: The ‘Bharat Jodo Yatra’ is Off to an Encouraging Start, But It Has to Convince Voters

It’s a long journey, but the initial response has been encouraging. The physical element of politics, when a leader walks the streets of towns and villages and interacts with the people, cannot be underrated. Some words of encouragement, a couple of acts of kindness and a few words of conversation, often change the mind of a hitherto hostile voter. There is no better way to form an emotional connection than through the personal touch.

As the yatra goes on, it will become harder but when persisted with, will be even more appealing as an act of devotion to an ideal. Apart from the BJP’s rather puerile attempts to try and divert coverage of the yatra, Arvind Kejriwal has also hastily announced a ‘Make India No. 1’ campaign to distract.

The Aam Aadmi Party (AAP) has been unable to engage with ideological notions that ultimately decide the fate of nations. The cleavages in society that are encouraged by the BJP are not opposed by the AAP. Bharat Jodo provides an ideological counterpoint to Hindutva and will likely provoke many such attempts by the BJP and AAP to distract and divert attention.

Delhi’s political conversations are not always well communicated to the rest of the country. Rahul Gandhi’s innate decency is acknowledged even by his critics. Bharat Jodo will allow millions to witness it.

The Prime Minister has built his political image through carefully stage-managed events. A man who favours spectacle as a means of emotional connection, Narendra Modi is particularly vulnerable when judged with regard to acts of personal compassion. This is the sweet spot that the yatra should aim for. The reason that the Prime Minister avoids one-on-one interactions with the media – or even unguarded interactions with voters – is that his carefully cultivated image may not stand up to unguarded scrutiny. The yatra will show Rahul Gandhi to the people, unmarred by media channels and their biases.

The Congress will need many more initiatives, but this is a good start. The party has successfully communicated its intent to take on the BJP in a way that media outreach and social media campaigns cannot. In the terminology of Bharat Jodo, the party has also communicated its stark opposition to the Hindutva project.

To free the country from shackles of hate and undo the damage done by BJP-RSS.

Step by step, we will reach our goal.#BharatJodoYatra 🇮🇳 pic.twitter.com/MuoDZuCHJ2

The physical nature and hardships of the yatra also hearken back to the Congress’ roots as a movement for liberty and equality. It brings back memories of a Congress that once ruled the hearts and minds of the people. The BJP wants to limit the Congress’ legacy. The Bharat Jodo yatra can ensure that it fails.

(Sarim Naved is a lawyer based in New Delhi.)