Two people have died and several are missing. 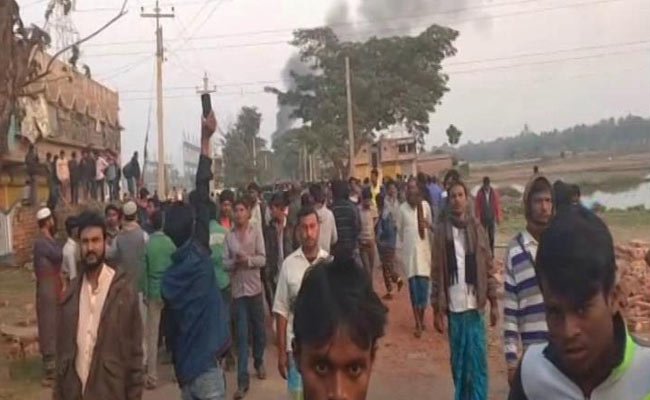 Angry protesters damaged cars and continued road blockades on January 18 in several villages of West Bengal’s Bhangar II block – the scene of large-scale violence since January 16 over “forcible” land acquisition for a Power Grid Corporation of India (PGCIL) project. According to a report in the Hindu, the unrest began with the arrest of local Trinamool Congress (TMC) leader Sheikh Shamsul Haq who is also part of a committee that opposed land acquisition. Haq told the Hindu that trouble over the acquisition of 14 acres of land for the project had been brewing for over two years now. Previous attempts to acquire land in Bhangar by the Left government in West Bengal had been abandoned because of the possibility of resistance along the lines of Nandigram and Singur.

The opposition held the police and the state administration responsible for the deaths, but the ruling TMC blamed “outsiders”, claiming the police did not fire a single shot. The locals, however, allege that another TMC leader, Arabul Islam, had a role to play in the forcible acquisition because the land-filling contract was given to him, reported the Hindu. The report suggests that tensions flared up once police were deployed to deal with a demonstration following Haq’s arrest.

Sharmistha Chowdhury, one of the protestors, told the Hindustan Times, “As the police tried to disperse the gathering by firing tear gas shells and rubber bullets, the situation went out of control,”

The police confirmed that two people had died, but refused to say whether the fatalities were due to bullets fired by the security forces. “Yes, two persons have died,” South 24 Parganas police superintendent Sunil Chowdhury confirmed.

Villagers in the South 24 Parganas district block had dug roads and felled tree trunks to obstruct the security forces and fought a pitched battle with the police when they tried to enter the core conflict zones, including Padmapukur and Machi Bhanga.

The police were forced to retreat and a number of uniformed personnel sustained injuries.

On Wednesday, January 18, the entry points of Padmapukur village were still barricaded with piled up bricks and tree trunks to stop the police from re-entering the villages. Sporadic incidents of violence were reported.

“The agitators are still blocking the road at various places. Some cars were smashed inside the village. Police are unable to enter but we are keeping an eye on the situation,” an Bhangar police station officer said.

Besides, stones were pelted at a police convoy, a police van was torched while at least three police vehicles were pushed into a pond by the mob, the police said.

According to villagers, at least six men are missing since the clash on Tuesday (January 17) and several others have sustained serious injuries.

“Who will take responsibility of the two men who were shot dead yesterday. Also six people from our village are missing since Tuesday evening. We want an answer from the government,” an inhabitant of Padmapukur village said. The Hindu, however, reported 12 missing based on claims made by villagers.

A large number of anti-land acquisition activists gathered on the adjoining Haora road demanding the chief minister’s intervention in the issue.

“We want our chief minister ‘Didi‘ (elder sister, as Banerjee is affectionately called) to come to Bhangar and assure us that no power grid would be built here. Our agitation would continue till then,” a group of protesters said.

Bhangar, known for its history of political violence, is on the boil since last week over the “forced” acquisition of 16 acres of farmland – spread over the villages of Khamarait, Machhi Bhanga, Tona and Padmapukur – by the state government for PGCIL. According to the Hindustan Times, the project is near completion but work stands suspended for now.

Banerjee declared on Tuesday night that the power grid would not be built in the region.

“No land will be acquired if people don’t want to give away land. The proposed power grid will be relocated if required,” Banerjee tweeted.

Meanwhile, the state opposition seized on the opportunity to embarrass the state government.

State Congress chief Adhir Ranjan Chowdhury visited the houses of the two dead villagers and demanded a judicial enquiry and CBI probe into the “killings”.

Sujan Chakraborty and Mohammad Selim also went to the violence-hit area and strongly criticised the role of the police. Selim told the Hindustan Times, “Police acted on the orders from the chief minister who herself had organised movements against land acquisition during the Left regime. But now she is busy organising global business summits,”

Chakraborty termed the Bhangar developments as “state terrorism” and “war against villagers” and said the peasants were fighting against “land sharks”.

However, TMC vice president Mukul Roy rubbished the allegations against the police.

“Police hasn’t fired a single bullet. Outsiders who came to the spot to instigate violence shot the people. The way police was attacked yesterday, there would have been major issues if the (previous) Left government was at the helm,” said Roy.