'A Desire to Excel in Every Field': Bhagwant Mann's Friends on the Punjab CM Designate

Former comedian Mann's friends, themselves celebrated comics, say that his dedication to Punjab and the issues of the common man made them confident that he would succeed in becoming CM. 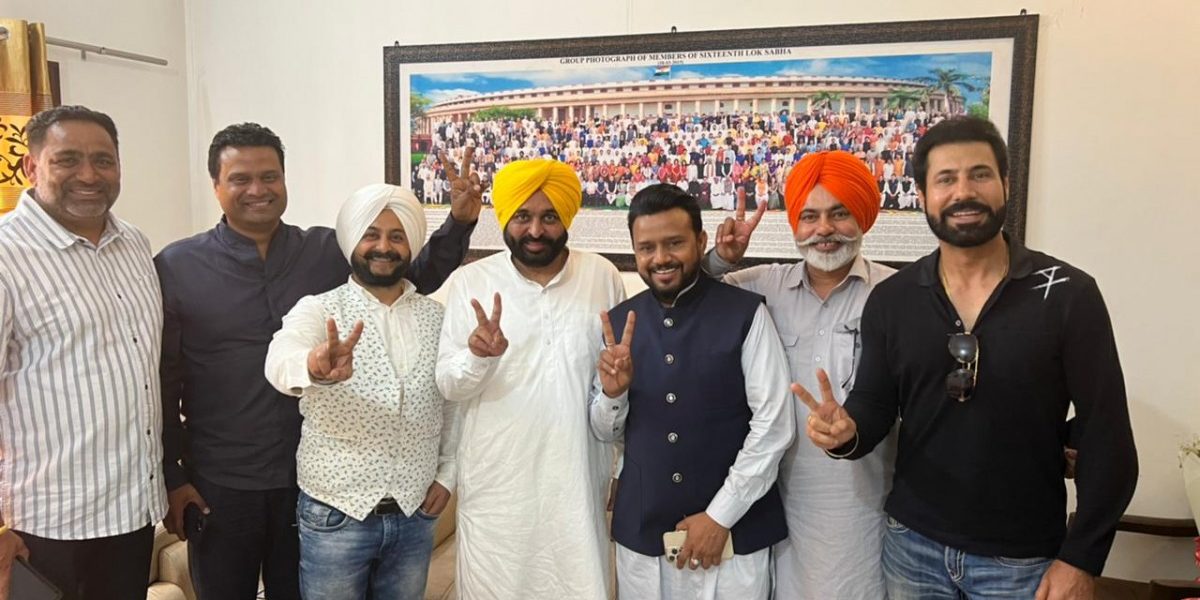 Bhagwant Mann with friends his Binnu Dhillon and Karamjit Anmol; AAP leader Jarnail Singh and his supporters, on election result day March 10, at his house in Sangrur. Photo: Kusum Arora.

Jalandhar: An old video of Punjab chief minister designate Bhagwant Mann from his early days as a comedian has gone viral on social media after the Aam Aadmi Party’s (AAP) historic win and Mann’s victory from the Dhuri assembly seat in the Sangrur district in Punjab’s Malwa region in the recently concluded Punjab assembly elections.

The comedy video features a classroom set up where the teacher asks Mann about his aim in life.

Responding to the teacher’s query, Mann, dressed as a student of a government school says, “If I studied well, I will become an officer and if not, then I will become an MLA or a Minister.”

Call it coincidence or sheer luck, but 20 years later, Mann has not only become an MLA but is set to become the 17th chief minister of Punjab. The video concludes with images of Mann from his political life.

Interestingly, the comedian who played the role of teacher in the video is renowned comedian of the Punjabi Film industry, Binnu Dhillon, who has long since been a close friend of Mann’s. Dhillon, too, hails from Dhuri in Sangrur.

On March 10, when election results were pouring in, Mann was at his house in Sangrur with Dhillon and another Punjabi comedian, actor and singer, Karamjit Anmol. 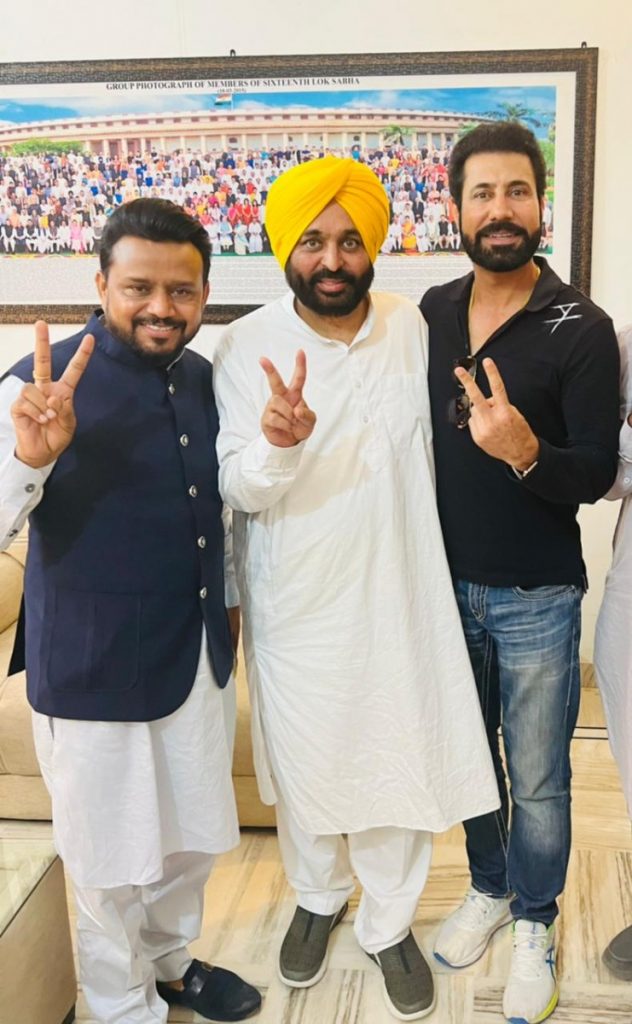 Mann celebrated the big day with his friends, watching AAP’s historic victory and also remembering every single word of the viral comedy video, which turned out to be true for him. But Mann, who won by a margin of 58,206 votes, is not just a politician; he’s also a comedian, actor, satirist, singer, lyricist and even an avid volleyball player.

The Wire spoke to Mann’s old friends, with whom he still shares the same warmth and affection that he enjoyed during his struggling days as a comedian.

Also read: From Parody to Politics: The Journey of Bhagwant Mann, AAP’s CM Face in Punjab

Talking to The Wire, Dhillon said that when he met Mann in 2002, he was already a star in the Punjabi entertainment industry. “I first met Bhagwant during our tour to US and Canada for a stage show, ‘No Life with Wife’. It was a huge success and our comedy received a massive response from the audience. Since that day, we have been together,” he said.

Dhillon said that in 1995, when he was pursuing a Master’s degree in theatre from Punjabi University, Patiala, Mann used to come to the varsity to perform various shows. “Bhagwant Mann is a tenacious person. His desire to reach the top and excel in every field that he chose till date has given him an edge over others. Whether it was comedy, stage plays, singing, writing lyrics or politics, he remained dedicated,” he said.

Speaking about Mann’s level of commitment to his friends, Dhillon said that in 2003-04, when he was going through a rough phase in his career, it was Mann who supported him. “I was part of the hit comedy show Jugnu Hazir Hai with Bhagwant. Someone from our team chucked me out and suddenly I was out of job and short of money. During those days, I was staying on rent in Patiala. But then a chance meeting with Bhagwant on the road changed my fortune forever.”

“I was going on a scooter and Bhagwant was in his car,” Dhillon continued. “The moment he saw me, he waved at me to stop. When I narrated the circumstances in which I was forced to leave the show, Bhagwant not only left that colleague (who removed Dhillon from the show) of his forever but brought me back to the show. That day, I got a lifelong friend and brother.”

On Mann becoming the chief minister of Punjab, Dhillon said, “Waheguru mehar kare…(May god bless him) What else can a friend ever ask for? Since the day he was announced as chief ministerial candidate, we had told him that he had won. I am extremely happy at his victory. His vision, understanding of politics, common man’s problems like drugs, unemployment and social issues, will help Punjab improve. Punjab is in safe hands now. All I want is that he should continue to serve Punjab for another four-five terms.”

The comedian also said that under Mann, the Punjabi film industry will also get a much-needed fillip. “We have been demanding a Film City in Punjab and an ‘Anti-Goonda Act’ to curb piracy from the last two governments, but nothing was done. As Punjabis are settled worldwide, our films have global appeal. We are looking forward to major steps in this direction,” he added.

Not many people know that Mann is also a good singer and nearly all of his songs were either satires on political system, detailed the problems of the common man or dedicated to revolutionary freedom fighter Bhagat Singh’s ideology. This is why he dons a mustard yellow turban, akin to that of Bhagat Singh, and has decided to hold his March 16 swearing-in ceremony at Khatkar Kalan, the native place of Bhagat Singh in the Nawanshahr district.

In one of his songs on Bhagat Singh, which he wrote himself, Mann sang, “Teri Qurbani da Bhagat Singh bhora mul na paya” (Bhagat Singh, politicians did not value your sacrifice for the country).

Even after becoming the MP from Sangrur, Mann sang many songs. He released a song titled, ‘Nankana’ in 2020, dedicated to Nankana Sahib in Pakistan, the birth place of the first Sikh master Guru Nanak Dev, where he sang, “Guru ji mere nain tarasde rehnde a Nankana Dekhan nu.” (Guru ji, I am waiting to see Nankana Sahib).

Interestingly, even one of his New Year albums, ‘Tik Tik Tik, 2001’, was a stark contrast to customary new year party songs. Mann, rather, made a satire on the common man’s problems, such as inflation, when he sang, “Mukke Mirch Masale, bache naiyo jande paale, Lakk todmi bazaar vich hai mehhagi Sajna, nawe saal di phir bhi vadhai Sajna.” (There are no chilly and spices in the kitchen, it is hard to raise kids, there is too much inflation in market but still, happy new year).”

Another friend of Mann’s, comedian Karamjit Singh Anmol, who campaigned for him in the Dhuri seat, also shared how they have been together since 1990, right from their school days.

Anmol said, “Bhagwant Mann was my senior in school. He was in class XII and I was in class XI. We were together in sports like Kabbadi, stage shows, serials and comedy acts. In fact, I was the first person who had predicted that he would become a politician as he had an interest and deep understanding of Punjab’s issues.”

Anmol said that initially, he was a singer but after his downfall in the field, it was Mann who gave him the big break to act in a comedy show Jugnu Kehnda Hai. “After that, we never looked back. Bhagwant is a jolly natured fellow, grounded and someone who enjoys the simple pleasures of life. That’s how he won people’s hearts. Now, he is not just my friend but the chief minister of Punjab. Bhagwant Mann belongs to everybody.”

“I just want to wish him good luck,” Anmol said. “As an artist, we don’t need to tell him what should be done for the Punjabi entertainment industry. I just want to wish good luck to Bhagwant in his journey to bring jobs and prosperity in the lives of people. We want our Punjab to grow.”

As his friends shared, Mann’s love for the joys of a simple life can be gauged from one of his old songs, titled ‘Kade ona cha nai chadeya’ (Now I don’t get that joy in life, like the one during old days), where he reminisces over his childhood days, simple village life, watching films on a VCR and working in the fields.

Notably, Mann was born in the Satauj village of the Sangrur district on October 17, 1973. His father, Mahinder Singh, was a teacher and mother, Harpal Kaur, a housewife. Mann did his schooling from the government school in Cheema Mandi village and pursued his graduation in commerce from Shaheed Udham Singh College, Sunam.

His first ever comedy album was with Punjabi comedian Jagtar Jaggi. It was here that they made the hit comedy TV series Jugnu Kehnda Hai for ETC Punjabi.

In 2008, Mann competed in The Great Indian Laughter Challenge on Star Plus. He also acted in an award-winning Punjabi film Main Maa Punjabi Di, directed by Balwant Dullat.

In 2011, Mann joined People’s Party of Punjab (PPP), launched by Manpreet Singh Badal, who had then parted ways with the Shiromani Akali Dal (SAD). He also contested the 2012 assembly elections on a PPP ticket from the Lehra assembly seat, but lost.

His big political break came in March 2014, when he joined the AAP and won from his home town, Sangrur. Mann also remained the AAP Punjab convener, but resigned from the post after Arvind Kejriwal tendered an apology to Bikram Singh Majithia in the drugs mafia case. In 2017, he contested against SAD president Sukhbir Singh Badal from Jalalabad assembly seat, but lost.

However, the 2022 assembly polls scripted an unprecedented history for Mann and the AAP in Punjab.