Having once achieved fame, wealth, or both, Indian actors, businessmen and sportsmen are unwilling to risk losing it by speaking out against social injustice or the crimes of the state. 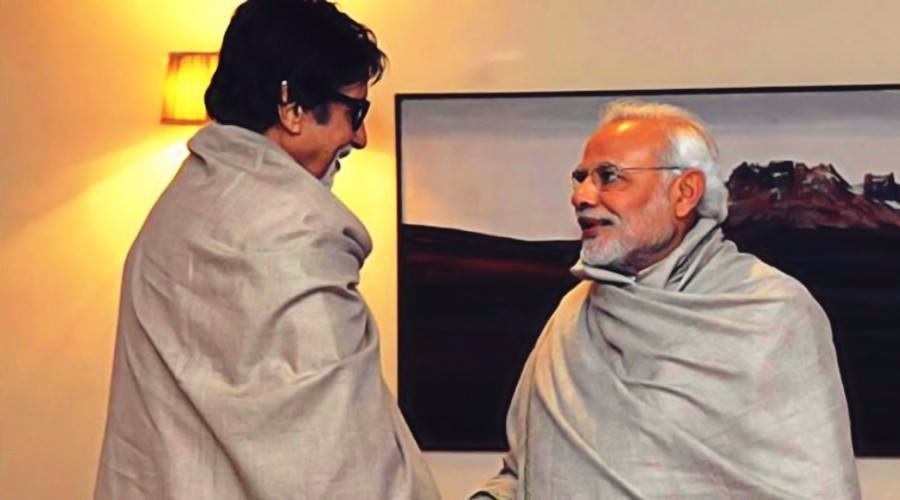 When, in November last year, the prime minister, Narendra Modi, announced the sudden withdrawal of the Rs 1000 and Rs 500 notes, economists were quick to voice their opinions, as was perhaps to be expected. More surprisingly, the Indian cricket captain chose to comment on the matter, in public. A week after the onset of demonetisation, Virat Kohli told a news conference that “For me, it’s the greatest move I’ve seen in the history of Indian politics by far, hands down. I’ve been so impressed by it. It’s unbelievable”.

The proximity of politicians to cricketers, and vice versa, is not new. For several decades now, politicians of both the Congress and the Bharatiya Janata Party (BJP) have been active in cricket administration (as well as, or perhaps especially, maladministration). Netas of all parties like to pose for photos with winning cricket teams. Still, the statement by Kohli was unprecedented. No Indian cricketer had ever before so resoundingly endorsed a prime minister in power. (What our cricket captain knew of politics, history or economics to justify his claim that demonetisation was “the greatest move in the history of Indian politics” is, of course, another matter altogether.)

The most adored people in India are cricketers and film stars. While our cricketers only sporadically side with powerful politicians, our film stars do so all the time. The more famous and powerful the actor, the more opportunistic is he in this regard. Consider the Big B, Amitabh Bachchan, without question the most celebrated actor in the history of Indian cinema. Through the 1980s Bachchan was extremely close to the Congress, then in power for long stretches in New Delhi. That he was a close friend of Rajiv Gandhi and Sonia Gandhi was well known. At Rajiv’s insistence, Bachchan even fought (and won) a Lok Sabha election on a Congress ticket.

In the 1990s, the Bachchans and the Nehru-Gandhis began drifting apart. Meanwhile, the Congress began to lose its pre-eminent position in Indian politics. A cluster of regional parties grew in prominence, coming together to form a United Front government at the Centre in 1996. One of these parties was the Samajwadi Party, led by Mulayam Singh Yadav.

But that was, or rather is, not all. In recent years, Amitabh has come closer to Narendra Modi and the BJP. In January 2010, while promoting a film in Gujarat in which he had acted, Amitabh offered to be brand ambassador for the state. The offer was accepted, gratefully, by a chief minister keen to move beyond the scars of 2002 and carve out a niche for himself on the national stage.

In May 2016, Amitabh compered a sarkari programme in celebration of Modi’s completion of two years as prime minister. He has since actively promoted Modi’s economic policies as well.

The actor who once broadcast his proximity to the Congress and the Samajwadi Party has now completed his transition to a third party altogether. Earlier this year, when the government lamentably failed in controlling the damage caused by floods in Mumbai, Amitabh tweeted: “Don’t try to fight nature… don’t put blame…”. This was widely seen as an attempt to protect the BJP, in power in the Centre as well as in Maharashtra, from criticism.

Actors are citizens too. One cannot begrudge them their political views or choices. Yet it is hard to see Amitabh’s seamless transition from one party to another, one politician to another, as anything other than opportunism. Contrast his behaviour with that of celebrated Hollywood actors. They, too, often have political affiliations, but to one party alone. George Clooney is a committed Democrat. Even if the American president, Donald Trump, had pleaded on bended knees, he would not have got Clooney to attend his swearing-in ceremony. On the other side, Clint Eastwood once addressed the Republican National Convention, but he stayed far away from any party event of the Democrats. 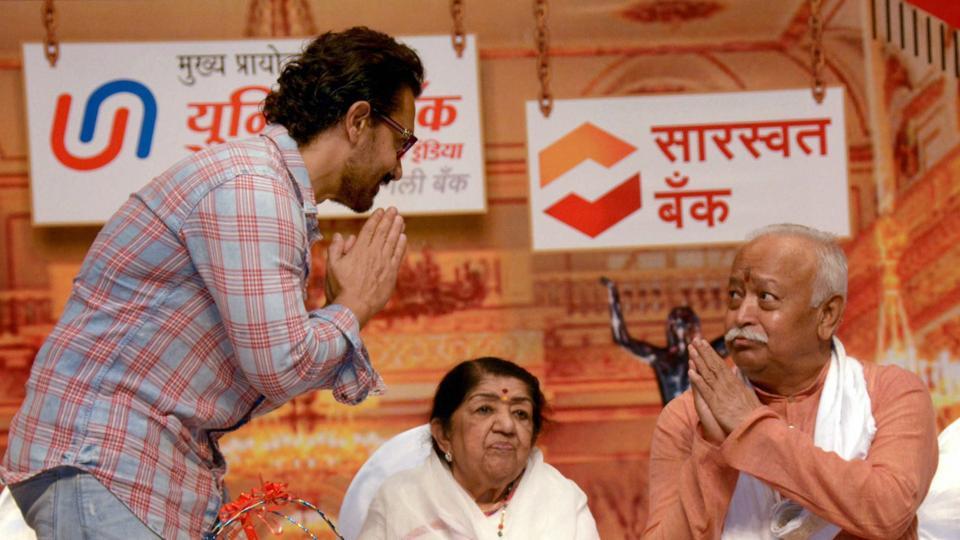 Actors in the West are also far readier to commit themselves to social causes. Thus Vanessa Redgrave and Angelina Jolie, among others, have spent much of their lives fighting for the disprivileged and disadvantaged.

In the West, those actors with strong social or political views tend to be courageous or consistent. In India, alas, Amitabh may not be exceptional. Other Hindi film actors are also inclined to be ingratiating towards politicians in power. The exceptions, such as they are, tend to occur in languages other than Hindi, as was once the case with M.G. Ramachandran and N.T. Rama Rao, who formed political parties to advance their own, deeply held political views, and as is the case now with Prakash Raj and Kamal Haasan, who have bravely spoken out against majoritarian trends in our society.

It is not obligatory for actors to be political. One respects those who are committed above all to their craft, and stay away from political events or political personalities. But one must have deep reservations about actors so keen to cultivate ruling party politicians. In 2006, with the Congress in power, Shah Rukh Khan visited Sonia and Rahul Gandhi at their home to invite them for one of his movies, later telling the press that Sonia was “a strong lady, someone you can admire”. One hopes (though one would not bet on it), that, when his next film comes out, Shah Rukh shall once more so publicly praise a family that is now in the opposition.

In May 2016, the actor Rishi Kapoor created a buzz when he railed on Twitter against the naming of so many schemes and structures after one or other Nehru-Gandhi. What he said was not untrue, but I couldn’t help feeling it would have been more credible, as well as more effective, had he said what he did before the Nehru-Gandhis lost power. When the United Progressive Alliance was in office he was silent on this question (unlike some others, this writer included, who had strongly criticised the practice at the time). It was also characteristic of the Indian acting fraternity that, after having spoken of rising intolerance in an unguarded moment, Aamir Khan later sought to build bridges with the ruling dispensation by accepting an award from, and symbolically bowing in front of, the Rashtriya Swayamsevak Sangh chief, Mohan Bhagwat.

The most famous Indians tend to be excessively deferential towards the politically powerful. And so also the richest Indians. Major industrialists publicly praise every single Budget ever presented, regardless of the party in power. (What they say in private is another matter.) Some of these so-called ‘titans of Indian industry’ can appear less than Titanic on Twitter, where they flatter Modi in the most unctuous terms.

I began this column by recalling Kohli’s enthusiastic thumbs-up to NaMo’s demo so soon after it was implemented. Four months later, when its negative effects were visible, the industrialist Rajiv Bajaj made so bold as to criticise demonetisation. As he told a Nasscom conference, “If the solution or the idea is right, it will go like a hot knife through butter… If the idea is not working, for example, demonetisation, don’t blame execution. I think your idea itself is wrong.”

But such criticisms of government policy by businessmen are few and far between. There is no desi equivalent of George Soros, who will pit his wealth, his intellect and his prestige against immoral and authoritarian acts by politicians and governments (recall that no Indian industrialist opposed the Emergency, while many supported it). When Trump imposed an obnoxious ban on the entry of citizens of select Muslim countries into the US, a range of major companies, from Microsoft to Google and from Apple to Facebook, publicly opposed it. On the other hand, even the most dubious and economically harmful decisions by the Union government tend to be met by unanimous, or near-unanimous, approval by our businessmen. An article published in The Telegraph this August documented this difference, its title saying it all: “Silence of business lambs: CEOs in America speak out but not those in India”.

Why are Indian capitalists, like Indian actors, so ready and willing to curry favour with those in power? The fragility of our public institutions, and the ability of our politicians to misuse them, may be one reason. If Soros or Meryl Streep take on Trump, they do so knowing that the president cannot order the Internal Revenue Service or the Federal Bureau of Investigation to open a case against them. In India, however, such institutional restraints to the abuse of power do not exist. Both Congress and BJP regimes have malevolently used government agencies to persecute their critics and rivals.

A plain lack of personal courage may also explain this sycophancy towards the powerful of our richest and most celebrated countrymen. Having once achieved fame, or wealth, or both, Indian actors and businessmen (and sportsmen too) are unwilling to risk losing it by speaking out against social injustice or the crimes of the state.

This article originally appeared in The Telegraph and has been republished here with the author’s permission.

The article has been lightly edited to meet style guidelines.