Behanan had been the lone casualty in the tug of war between Chandy and the then-KPCC chief V.M. Sudheeran ahead of the 2016 assembly elections. 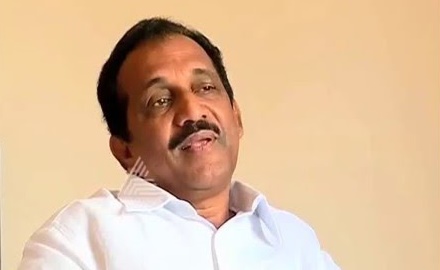 Former Chief Minister Oommen Chandy has backed loyalist Benny Behanan for Kerala Pradesh Congress Committee (KPCC) president as the nominee of the ‘A’ faction, a highly placed source at the All India Congress Committee (AICC) confirmed. With Ramesh Chennithala occupying the position of leader of opposition in the assembly as the representative of the ‘I’ faction, the ‘A’ faction has the claim to the position of KPCC president. ‘A’ stands for Antony but has practically been under Chandy’s control ever since he replaced A. K. Antony as the chief minister after the disastrous showing of the United Democratic Front (UDF) in the 2004 general elections.

It may be recalled that Behanan was the lone casualty in the tug of war between Chandy and the then-KPCC chief V.M. Sudheeran post the week-long ticket distribution drama that was enacted in full public view in Delhi ahead of the 2016 assembly elections. Though Chandy ensured that Behanan was rehabilitated when the 21 member political affairs committe (PAC) was announced last September by naming him among the five nominees of the ‘A’ faction, his nomination as the PCC chief may not go well with A. K. Antony and the High Command who will take the final call.

Behanan’s name cropped up during the Sarita scandal when his phone conversations tutoring Sarita Nair prior to her deposition before the enquiry commission got leaked in the media. Despite the renewed focus on the case in recent times on account of the Retd. J. Shivarajan Solar enquiry commission presenting its report to the government, it may not be held against Behanan personally as he was only probably doing it at Chandy’s bidding.

The larger question for the Congress as they look ahead to the general elections in 2019 and assembly elections still ahead in 2021 is whether Behanan, who is considered a political lightweight, is the right candidate (regardless of the Sarita controversy).

A 65-year-old former Kerala Students Union (KSU) President (1978-79), Behanan was first elected as an MLA in 1982 from Piravom, where the Malankara Syrian Jacobite church of which he is a member, commands more than 50% of the votes. But in the subsequent election of 1987, he lost by a huge margin to CPM’s Gopi Kottamurickal in the same constituency and didn’t contest again till another resounding loss in the 2004 general election from Idukki to Kerala Congress’ Francis George. In 2011, however, he managed a comfortable win in the newly carved out constituency of Thrikkakkara but he couldn’t contest again in 2016 after he opted out to broker truce between Chandy and Sudheeran.

A senior leader of the ‘A’ faction revealed on the condition of anonymity that Behanan’s name was floated by Chandy as his nominee as far back as March this year when Sudheeran stepped down abruptly, citing health concerns after suffering a freak injury. This suggestion was, however, vetoed by the central leadership and Antony, as they took the decision to appoint an interim chief in M. M. Hassan, who was the senior-most vice-president and a representative of the ‘A’ faction.

But with AICC elections taking place after a gap of almost 20 years, and the process of election/nomination of 303 KPCC members and 35 AICC members from the state underway, an agreement has been reached between Chandy’s ‘A’ faction and Chennithala-led wider ‘I’ faction. K. Muralidharan, the former PCC chief and son of the late K. Karunakaran (who is Chennithala’s chief rival in the ‘I’ faction) is also on board as he would stake claim for the position of UDF convener. Eighty-year-old P. P. Thankachan is the incumbent UDF convener who also coincidentally hails from the same church denomination as Behanan’s.

K. Sudhakaran, the party’s heavyweight from Kannur who is probably the only Congressman who can give a scare to the comrades in the red bastion, has also been angling for the positions of PCC chief or UDF Convener for a while and would once again emerge as the loser in the event of the consensus among the factions getting the seal of approval from the central leadership.

Even if the central leadership were to oppose Behanan on account of the fact that he is a political lightweight, they would find it tough to suggest an alternative name apart from trying to coax Chandy himself to occupy the post that he has never held in his five decade long career in the party.

Chandy had ruled himself out of contention taking responsibility for the drubbing in the 2016 assembly elections. Although it was speculated then that his tough stance was to get Sudheeran to resign as well, Chandy has steadfastly maintained that stance ever since. There is also an unwritten ‘quota’ requirement that is assiduously followed in the Congress’ Kerala unit wherein if the parliamentary party leader is a Hindu, a minority candidate (preferably Christian, as Muslim League fulfils the Muslim quota requirements) is chosen to head the PCC.

The high command will have to defer to factionalism in its current form in the Kerala unit as long as Chandy is active but his faction has few middle-aged leaders with mass base. The party can’t afford to let Chandy sulk anymore as he remains vital to the party and enjoys popular support despite the Sarita scandal. It remains to be seen what Pinarayi Vijayan and the Left Front does with the Solar Commission report and how soon. Congress leaders appear quietly confident though.

It has always been the case in Kerala politics that neither the CPM-led Left Democratic Front (LDF) nor the Congress-led UDF has gone all out to annihilate each other in the state despite having ample opportunities. The lack of enthusiasm of the UDF in 2012 to pursue the conspiracy angle in the brutal hacking of renegade Marxist T.P. Chandrasekharan is a case in point. Or the compromise reached between Chandy and Vijayan to call of the LDF’s secretariat “siege” calling for Chandy’s resignation in 2013.

With complaints of favouritism and factional allocation in the KPCC membership list finalised by returning officer Sudarshan Natchiappan, the central leadership has summoned Chandy, Chennithala, incumbent PCC chief Hassan, Muralidharan and some MPs including P.C. Chacko for discussions next week. Sources indicate that a final decision on the now-frozen KPCC membership list will be taken by Tuesday in Delhi along with Behanan’s candidature.