If the BJP posts gains in the state, Mamata Banerjee will be forced to wage another solitary battle to contain the saffron party in the 2021 assembly elections. 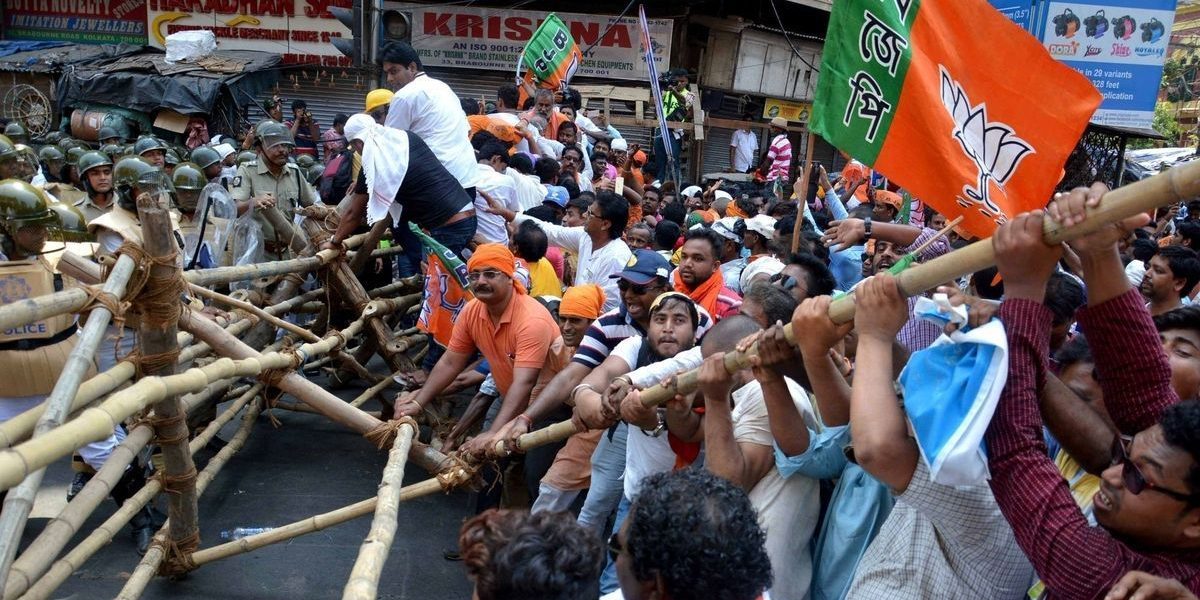 The BJP has shown it is as adept at political violence as other parties in Bengal. Credit: PTI

With the curtain about to drop on the bitterly fought parliamentary elections in Bengal, the stage is set for yet another major – and perhaps more challenging – battle two years from now, when the state will head to assembly polls.

Over the two years to come, the political stage in Bengal is likely to be dominated by a nervous, aggressive Trinamool Congress (TMC) and a buoyant Bharatiya Janata Party (BJP). Also likely to be watching from the sidelines, the near-extinct Communist Party of India (Marxist) and an enfeebled Congress. From all indications so far, the CPI(M), its shrill vocal supporters online notwithstanding, will remain in the groove of political obscurity into which it disappeared since losing power in 2011.

In the weeks to come, two possible political scenarios could emerge in Bengal. Both hinge on the electoral outcome on May 23. Overall, if the Narendra Modi government retains power at the Centre, the BJP will vigorously reinforce its strategy in Bengal and prep for the assembly elections. From the bitter and violent poll campaigns and election processes witnessed in the Lok Sabha polls (which conclude on Sunday), the political slugfest could plumb even greater depths in times to come. Bengal’s future political destiny depends on the number of seats the BJP manages to win in the general elections. Or: it depends on how far the TMC is able to contain the BJP surge without any help from other so-called secular political quarters.

Also Read: Ground Report | CPI(M) Has Been a Major Force Behind BJP’s Mainstreaming in West Bengal

Mamata Banerjee and the TMC will be pushed into a vulnerable zone if the BJP manages to notch up a double-digit tally from its current meagre two seats out of a total of 42.

Former Congressman and now Bengal BJP vice president Joy Prakash Majumdar is confident of winning as many as 14 seats this time. “There are ten other seats which could go either way,” he says. If that turns out to be the case, Banerjee will face a critical challenge in holding on to power. 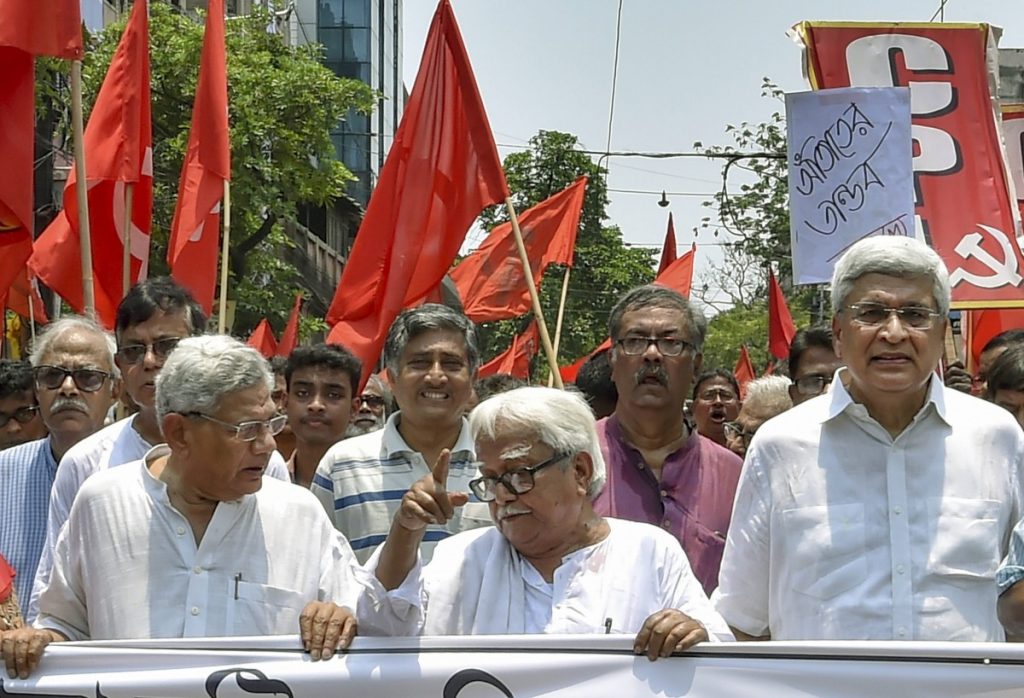 CPI(M) leaders at a rally in West Bengal. Credit: PTI

Mamata will be forced to fight yet another solitary battle with an even more assertive and defiant BJP. Meanwhile, the CPI(M) and Congress will continue to be passive spectators or active saboteurs as Bengal rapidly changes colour.

The CPI(M) has already made it clear that it makes no distinction between the politics of the TMC and the BJP. This election was an acid test for a party which claims to possess a higher moral authority when it comes to secularism. The CPI(M) has failed that test. Arguably, the communists would not mind if a BJP-led by Narendra Modi government dislodges the current Mamata Banerjee-led TMC dispensation. But if in the Left’s fantasy world, that outcome were to lead to a CPI(M) resurgence, it seems safe to predict that the likelier outcome will be the deeper burial of a political body whose vital signs are barely registering even now.

The popular consensus in Bengal suggests that if the TMC’s numbers slide and the BJP’s scale up in the general election, it will pave the way for the BJP to make a bid for power in the 2021 assembly polls. It would hardly be an exaggeration to say that even in 2014, such a possibility seemed near-impossible. The BJP – given the absence of opposition to Mamata Banerjee – could easily occupy that space in the run up to 2021.

Banerjee’s critics squarely hold her and her so called politics of “appeasement” responsible for bringing this situation upon herself. Even the threat of the BJP taking charge of a sensitive state like Bengal, with a 30% Muslim population, is not going to induce a tactical change on the part of forces that expend a lot of energy demanding anti-fascist credentials. A greatly strengthened BJP led by Narendra Modi and Amit Shah is not likely to trigger a moral or ethical dilemma for these sectors.

Unlike the Communist parties, the TMC never laid any claims to a higher ideology other than pursuing the ideology (if it may be called such) of attaining state power. Given the psychology of this party, defections could well be in order. That is to say, if the election results drastically slash TMC seats – even a loss of five-six seats – a shadow will be cast on the tenure of Mamata Banerjee’s government, giving a fillip to the BJP.

The panicked equations the Left is making between the TMC and the BJP in these closing hours of the election cycle is, itself, revealing. Few analysts calling for tactical support to Mamata have any illusions about her complicity with the BJP in the past, or her political practice that is essentially devoid of ideology. However, it can be argued, that it is precisely her lack of ideological coherence that has allowed Mamata to see the threat the BJP poses to Bengal – and India’s – social fabric.

The CPI(M) has never developed an ideological language capable of addressing the messy terrain of Indian politics, beyond name-calling, identifying enemies, and marking itself as the purest upholder of honourable principles. Today, its cluelessness about its own relevance – online and on the ground – would be comical if it did not also reveal how easily Leftists can become complicit in a fascist project because, in their blind hatred, they have no capacity to identify the real threat. 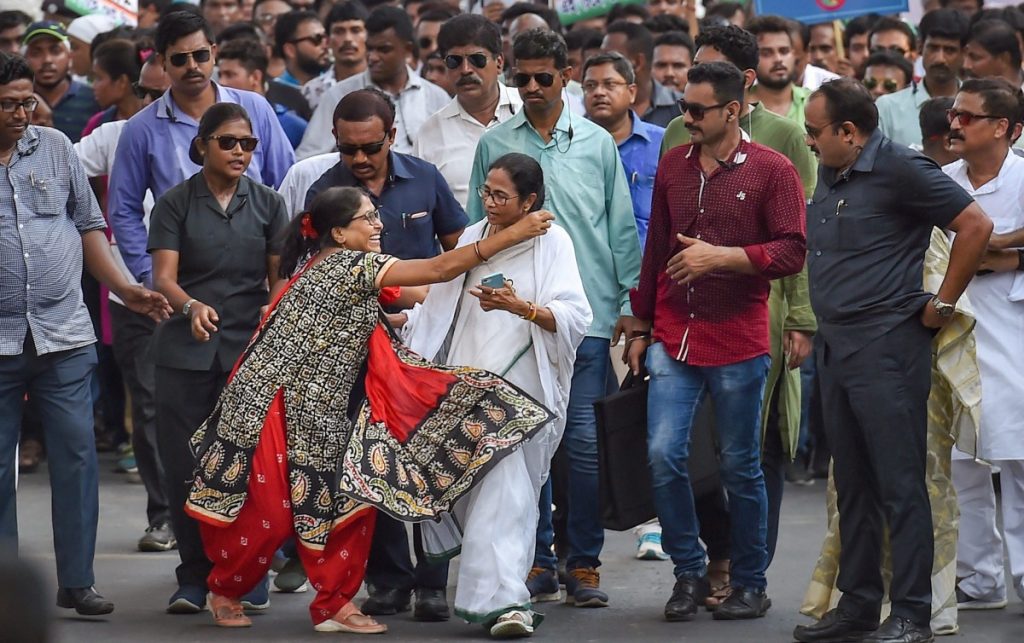 Mamata Banerjee at a march in Kolkata. Credit: PTI

The threat of defection

It will be left to Banerjee to once again try to keep the BJP at bay in 2021. Her headache will likely be compounded by possible defection from within her own camp. At a recent election rally, Narendra Modi boasted 40 TMC legislators are in touch with him and his party. Insider sources within the BJP say TMC leaders, in private, do not rule out some of their own legislators switching camps depending which way the poll pendulum swings.

The BJP is pumping money into Bengal. In the wake of Modi’s statement, the TMC has accused the BJP of encouraging horse trading. It may be reasonable to argue that Banerjee knows how susceptible a section of her party legislators could be to the lure of money or other attractive opportunities.

A new entrant in Bengal’s political arena, BJP “cadres” consist of former TMC, CPI(M) and Congress workers familiar with the machinery of political violence. As the recent parliamentary polls have shown, the BJP is as adept at using violence as the TMC or CPI(M).

In such a situation, where the culture of political violence is an everyday affair, a strong presence of the BJP – whose main politics is that of polarisation – could push the state into a bleak and dark place.