Earlier in the day, CM Mamata Banerjee had written to PM Modi, requesting him to withdraw the Centre's order recalling the bureaucrat. 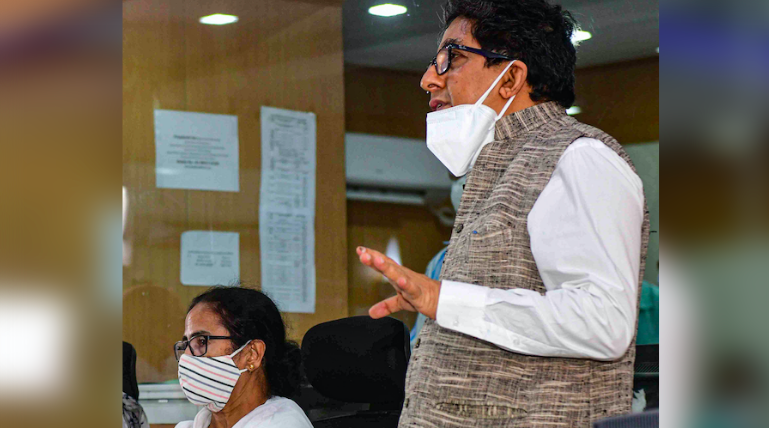 Alapan Bandopadhyay and Bengal CM Mamata Banerjee at the control room set up for Cyclone Yaas, on May 25, 2021. Photo: PTI

The Wire Staff
Government
Politics
31/May/2021

Kolkata: West Bengal chief minister Mamata Banerjee’s chief secretary Alapan Bandyopadhyay resigned from his position on the afternoon of May 31, putting a temporary stop to the saga that had developed with the Modi government order recalling him to the Centre.

Bandopadhyay will be principal advisor to the chief minister for the next three years. Bengal’s new chief secretary will be Harikrishna Dwivedi and new home secretary, B.P. Gopalika.

Bandyopadhyay, a 1987-batch IAS officer of West Bengal cadre, was scheduled to retire on Monday after completion of 60 years of age. However, he was granted a three-month extension following a nod from the Centre to work on COVID-19 management.

This was until the Centre, in a surprise move after Prime Minister Narendra Modi’s visit to cyclone-affected areas in Bengal on May 28, sought Bandyopadhyay’s services on the same night and asked the state government to immediately release the top bureaucrat.

The Centre’s sudden move was largely assumed to be the product of a tussle between Modi and Banerjee, with BJP alleging that protocol had been broken during Modi’s visit by Banerjee.

Announcing Bandopadhyay’s decision to retire, Banerjee said that she stood beside bureaucrats and that the Modi government had disrespected bureaucrats through its move. “They are not bound to do whatever they are told. Enough is enough. I am with bureaucrats. They have been insulted. They [at the Centre] are full of empty speeches and [expect] bureaucrats to do the heavy lifting,” she said, as reported by local media.

Earlier on May 31, Banerjee had written to Modi, requesting him to withdraw the Centre’s order and said her government “is not releasing” the top bureaucrat. Announcing Bandopadhyay’s decision to retire, Banerjee said that the prime minister had not replied to her by late afternoon.

In a five-page letter, Banerjee urged the prime minister to reconsider the Centre’s decision to recall the chief secretary after giving him a three-month extension.

Banerjee said she was shocked by the Centre’s decision and termed the order as “unilateral”, which was issued “without any prior consultation” with the state government.

“This so-called unilateral order is an unreasoned volte face and by your own admission, against the interests of the state and its people.

She had also said, “The West Bengal government cannot release, and is not releasing its chief secretary at this critical hour, on the basis of our understanding that the earlier order of extension, issued after lawful consultation in accordance with applicable laws, remains operational and valid.”

In a communique to the state government, the personnel ministry on May 28 said the Appointments Committee of the Cabinet has approved the placement of the services of Bandyopadhyay with Government of India as per provisions of the Indian Administrative Service (cadre) Rules, 1954, “with immediate effect”.

It also directed Bandyopadhyay to report to the Department of Personnel and Training, North Block, New Delhi by 10 am on Monday.

Bandopadhyay’s resignation means that he has also turned down the extension given to him.