With Babulal Marandi's 'Ghar Wapsi' to the BJP, Jharkhand's Politics Has Changed

The Marandi who spoke on Monday while re-entering the BJP sounded very different from the Marandi of the last 13 years. 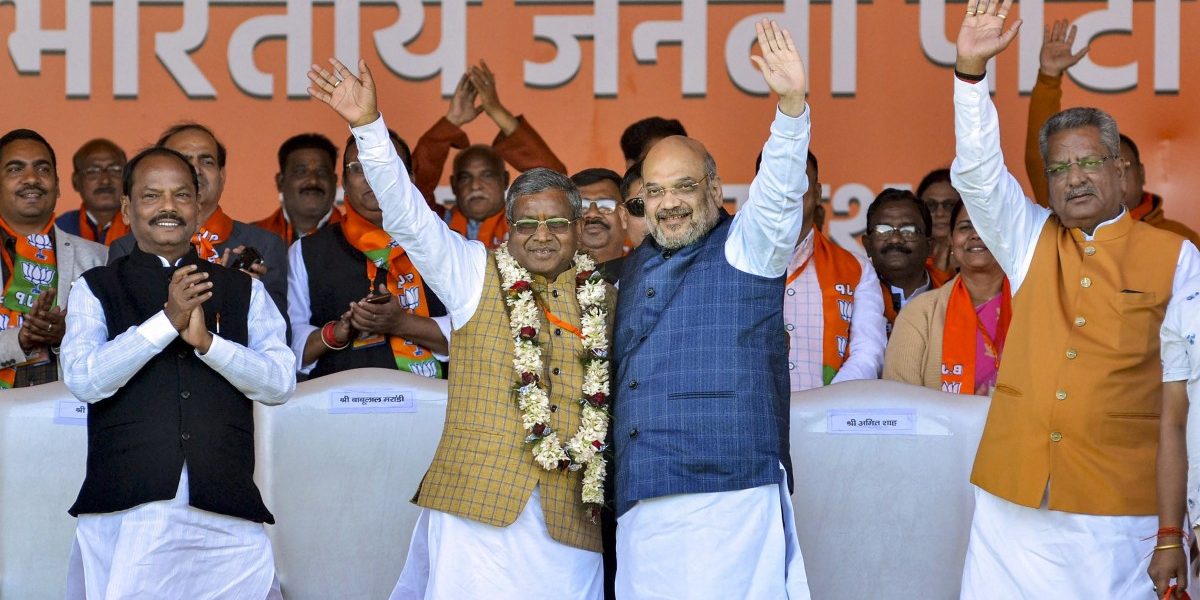 Ranchi: After a long estrangement of 14 years, former Jharkhand chief minister Babulal Marandi has rejoined the Bharatiya Janata Party, leading to speculations on what this means for state politics and for the BJP’s tribal politics in the country.

The state BJP unit organised a magnificent show in the capital, Ranchi, on Monday to mark the occasion. Marandi’s re-entry comes at a time when the last assembly elections robbed saw the the party’s star faces – including then chief minister Raghubar Das – lose, thus creating a political vacuum for Marandi to grab.

Presided over by home minister Amit Shah and attended by a galaxy of senior leaders like Om Mathur, former Lok Sabha speaker Karia Munda, Union minister Arjun Munda and Das, among others, Marandi amidst thunderous applause walked back into his former parivar (family). He was back to toeing the Hindutva line, which he had shunned or openly criticised during his independent political journey.

Marandi went on to say that ‘secular politics’ in India existed because of ‘Hindutva politics’, making it clear that he was hardliner second to no one, at least in Jharkhand. This perhaps makes his aims clear, as he gears to lead the BJP in the state assembly. The BJP, which has kept the leader of the opposition post vacant, will be soon be filling it with Marandi.

Also read: Pushed Into Politics, Passionate Player Ever Since: The Journey of Hemant Soren

Marandi also hinted that his priority would be to bring the tribal vote back to the BJP. Without naming the Citizenship (Amendment) Act, he said, “Fear is being spread even among the Adivasis. I am telling my brothers that I am walking with you, and hence there is no need to fear.”

The BJP had understood the possible political benefits of the Jharkhand statehood movement and carved out the state in 2000, when Atal Bihari Vajpayee was prime minister. Though Jharkhand Mukti Morcha chief Shibu Soren fought his whole life for statehood, the BJP decided to form its own government, overlooking Soren’s plea to support his party form the first government in Jharkhand. Marandi, who was a minister at the Centre and wore a smile on his face in all situations, was chosen over a more senior Karia Munda to occupy the hot seat.

However, Marandi’s government fell in 2003 and he lost power. Later, the BJP replaced him with a junior, Arjun Munda. Denial a role in the state’s politics, Marandi decided to look for an alternative and in 2006 decided to float his own political front, the Jharkhand Vikash Morcha (JVM). A few BJP leaders and leaders of the Congress joined Marandi at the start, but most of them except Pradeep Yadav, who on Monday joined the Congress in a separate function in Delhi, had gone back to the BJP or their respective political folds.

From 2006 onwards, Marandi fought a lone battle, mostly against the BJP, winning 11 seats in 2009, eight seats in 2014 and three in the recent assembly election. His MLAs made it a point to deflect to the BJP to save the party’s governments. Marandi’s dream to occupy his once-lost chief minister’s post never became a reality.

Even in the recent assembly elections, Marandi contested in all 81 seats and worked hard to try and regain power, but won in just three seats. The recent polls had placed Hemant Soren, Jharkhand Mukti Morcha executive president and son of statehood movement veteran Shibu Soren, on the throne instead.

“The tribal vote that earlier was with the BJP and now has gone to the JMM or the Congress. It will come back to the BJP with the coming of Babulal Marandi ji,” claimed Ramesh Pushkar, a BJP old-timer who served as a party spokesman when Marandi was in power. Marandi’s JVM, now merged with the BJP, harnessed 11% vote share in the 2019 assembly elections. “We expect 8-9% vote share to shift to the BJP in the next assembly elections. BJP will be formidable,” Pushkar hoped.

V.P. Sharan, a former professor of political science at St Xavier’s College, Ranchi who is close to the Congress, however, did not see any good coming for the BJP. “It was a clear question of survival for Babulal Marandi. He had become a political dwarf in the state, particularly after the recent assembly elections. On the other hand, the BJP did not have a face who could lead the party from the front. This political situation suited both Marandi and the BJP. His re-joining the BJP will not make much of a difference to politics.”

Sharan even said that Marandi had suffered a ‘loss of image’. Starting from 2006 and until recently, Marandi’s image had been one of fighting against the BJP’s divisive politics, and now he has joined them, Sharan said.

The Marandi who spoke on Monday sounded very different from the Marandi of the last 13 years. “The BJP has a political philosophy. It is also a cadre-based party,” he now claimed.

Shah, who had overseen arrangements for the huge gathering to welcome back his new point-man in Jharkhand, revealed he had been trying to get Marandi back into BJP since 2014. “Babulal ji thode ziddi hain – Babulal is a hard nut to crack,” Shah said.

If Marandi took the ‘ghar wapasi’ (going back home) route, his JVM colleagues Pradeep Yadav and Bandhu Tirkey chose the ‘ghar talasi’ (looking for a new home) route that ended in the Congress. The two leaders joined the party in the presence of Congress’s Jharkhand unit in charge R.P.N. Singh and senior leader Randeep Surjewala. “I was with Babulal ji because he stood with the poor and the downtrodden. Today he is talking something else,” Tirkey said in his characteristic style.

Tirkey, who holds an MBA from BIT Mesra and often stands out due to his controversial statements against the BJP, is a tribal hardliner. He had been put behind bars until the last assembly elections on charges of obstructing official work due to his dharnas against the Raghubar Das government’s policies and due to a corruption case in his ministry when he was the sports and youth affairs minister in 2007-08.

Yadav, on the other hand, started his career with the BJP. He also was put behind bars after he fought against displacement in Godda. Yadav is seen as a strong leader in Santhal Pargana and does not fail to show his presence in the proceedings of the state assembly, just like his colleague Tirkey, unlike many legislators who choose silence.

“Bandhu Tirkey is sharp and his joining the Congress will no doubt sharpen the party. He will be able to attract young voters into the party fold. On the other hand, the Yadav vote will now concentrate with the Congress upon Pradeep Yadav’s joining the party,” Pushkar, who has worked with Yadav, observed.

Monday’s political developments increases both the BJP and Congress’s strength, and the JMM will be at the receiving end of that in the long run. While the BJP’s main focus in the state is a mix of Hindutva and tribal politics, JMM has been focusing on ‘Jharkhandi sub-nationality’ politics (tribal and original non-tribal settlers’ politics), which came out sharply in the 2019 assembly elections. The JMM will now have to respond to the new political situation.