Ayodhya and the 'Modimon Effect'

The Supreme Court judgment is the official marker of a new truth regime. Falsehood and reconciliation is the emergent ethos of our times 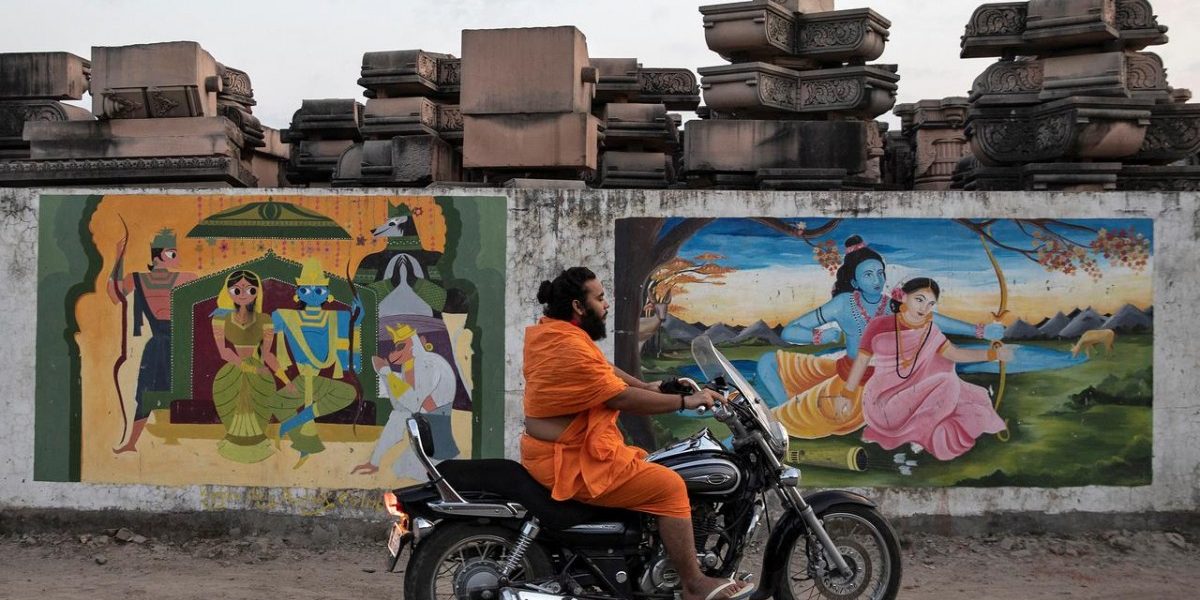 A Hindu priest rides past a workshop where the pillars that Hindu nationalist group Vishva Hindu Parishad say will be used to build a Ram temple at the disputed religious site are kept, in Ayodhya, October 22, 2019. Photo: Reuters/Danish Siddiqui/Files

The recent Supreme Court judgment on Ayodhya has provoked a host of reactions, predictions, jeremiads and prophesies, which run the full gamut from announcements of the end of democracy to reminders of the panchayat system to re-readings of the multi-faceted character of Rama, and still many more political and cultural speculations. The decision, even leaving aside those who have actually read the more than 1,000-page text, has become a Rorschach test for every hope and fear across the political spectrum in India.

This is thus a strange unifying moment in modern Indian history, whereby a potentially highly divisive judicial decision actually turns into an inkblot in which we can all find something with which to confirm our views.

I am not exempt from this argument. I see the November 9 judgment as a big step towards the end of liberal democracy and the creation of a post-democratic political system in India. The key to this transformation is what we may call the production of authoritarianism by means of authoritarianism (echoing the economist Piero Sraffa’s book on The Production of Commodities by Means of Commodities, his extension of the ideas of Ricardo to criticise neo-classic economics).

In Modi’s India, authoritarianism is both the means and the end, thus creating a vicious and volatile cycle between incendiary events and toxic outcomes. This judgment also inaugurates a political form which Modi’s India may be credited with inventing: a protocol for Falsehood and Reconciliation (the exact inversion of the methods and tools of the many truth and reconciliation commissions).

In this new political form, a new level of national reconciliation is achieved by agreeing to share falsehoods: about Indian history, about archaeology, about who speaks for the Rama idol, about “Hindu” beliefs and faith, about community and communalism. And this new convention is appropriately announced by an unsigned judgement which brings Foucault to Hindutva by announcing the death of the judicial author. This reconciliation based on shared falsehood is the key to the Rorschach effect combined with Modi’s version of the Rashomon effect (made famous in Kurosawa’s great 1950 film about the variety of ways in which different observers view the same event). This is what I call the Modimon Effect.

The Modimon effect is the Rashomon effect on a national, even global, scale. Modi has mastered this effect in his own long career as a speaker, ruler and performer. He encourages people to see him as Gandhi one day, as Shivaji the next. As the builder of toilets one day and of flyovers the next. As the friend of the chaiwalas who is also the crony of the Ambanis and the Adanis. As the incorruptible ascetic who also spends crores on his wardrobe and personal grooming. As the protector of both cows and lunar orbiters. The leader who was first to use a hologram to speak to multiple audiences at once. Modi’s image is holographic and so is his message.

This Modimon Effect is what allowed the Supreme Court judgement of November 9 to be the basis for a bizarre sort of agreement across the political spectrum, that falsehood is a reasonable basis for national reconciliation. Of course, there are the naysayers, who refuse to buy into either falsehoods or fake reconciliation. But they are remarkably few.

The Congress, the BJP, many Muslim leaders, some leaders of the Communist party, many secular liberals and virtually all BJP followers, have agreed to find reconciliation in falsehood. Of course, they all simply think their perceptions are valid, or valid enough to pretend that they are true, and true enough to be the basis for reconciliation.  No more need for “Satyameva Jayate”. Welcome to the new world in which the production of falsehoods by means of falsehoods is our new formula for politics.

Also read | Ayodhya’s Forgotten Mahant and His Message of Peace

This prediction is not intended to be flippant. We need to play close attention to the politics of truth in the emerging authoritarianisms of the world, in which India is a leader, in part because it still appears to have the trappings of a relatively free press, an ostensibly independent judiciary, a secular constitution and a vigorous electoral system. Truth, understood as a moral principle for politics (as in Gandhian satyagraha), truth as a matter of fact or evidence, truth as a criterion for distinguishing fake news from genuine news, truth as a distinctive feature of scholarship in contrast to propaganda, all these kinds of truth are now on the defensive and have been rapidly corroded. What has taken their place is a new form of evidentiary politics, which characterises street mobs as well as the highest institutions of the land. What is this new regime of veracity, credibility and facticity about?

Some of its elements of it have old-fashioned roots in earlier forms of fascism and totalitarianism, notably under Hitler and Stalin, where major claims were made about society, history and mass interests which were simply cooked up and fed to the masses, through various combinations of spectacle, rumour and coercion. Other elements follow the more recent logic of “fake” news, efforts to simulate the truth for sectional purposes by manipulating digital means of manufacturing evidence, both visual and verbal. Still other elements come from the throttling of the key elements of science, journalism and public debate, so that only some opinions are safe to hold. Every one of these elements can be identified in authoritarian systems elsewhere in the world and earlier in history.

But there is more to this new regime of pseudo-truth than all this and it requires us to make a move that is both historical and cultural. This region of the subcontinent (I am careful here not to call it “India”) has long understood social truth to be incarnated in the Hindu dharmasastras, the complex body of legal maxims, doctrines, commentaries and rulings, which brings the abstractions of Hindu philosophy closest to everyday practice.

The essence of this deeply embedded practical morality derives not so much from the Arthasastra as from the dharmasastras and it can be reduced to two principles: (a) the king’s declarations in particular cases reflect his divine capacities and are thus both truthful and binding in all matters under dispute; and (b) there is no general, universal or Kantian principle underlying practical morality, only an infinite plethora of rules depending on the context, of which the most important is the social standing of the person whose actions are being judged.

There is no universal Hindu ethics in the modern, Kantian sense. Together, these deep principles have now acquired a new life in the BJP regime founded on Hindutva. They have slowly displaced and marginalised alternative ideas of ethics from Buddhism, Jainism, Christianity, Islam or modern Western ideas which challenged the Hindu consensus, the latter based on the absolute authority of royal legal utterances and the fundamental principle of each rule for someone, no rules for everyone. My aim is not to invoke a deep Indic cultural essence but to say that the complexity of traditions of truth in this region has now been reduced and essentialised to one such set of traditions, closely linked to the Hindu dharmasastra.

The recent Supreme Court judgement is the official marker of this truth regime. Its judges are not scholars of Hindu law, nor do they need to be. They are reacting to three decades of mass Hindutva politics, a powerful political sovereign who has captured the space of dharma and a Hindu majority which has now made real what were only two centuries ago mere categories: “Hindu” and “majority”.

Thus, the BJP has succeeded in instituting, through its very words, speeches and pronouncements, a regime of truth for some which amounts to reconciliation by falsehood for the many. It is this shift in the political epistemology of truth in India today that should cause us the greatest alarm, and it is exemplified in the new relationship between falsehood and reconciliation which the Ayodhya judgement has made respectable.