Hindu, Shia and Sunni religious leaders were present at the event held in Ayodhya on Wednesday. 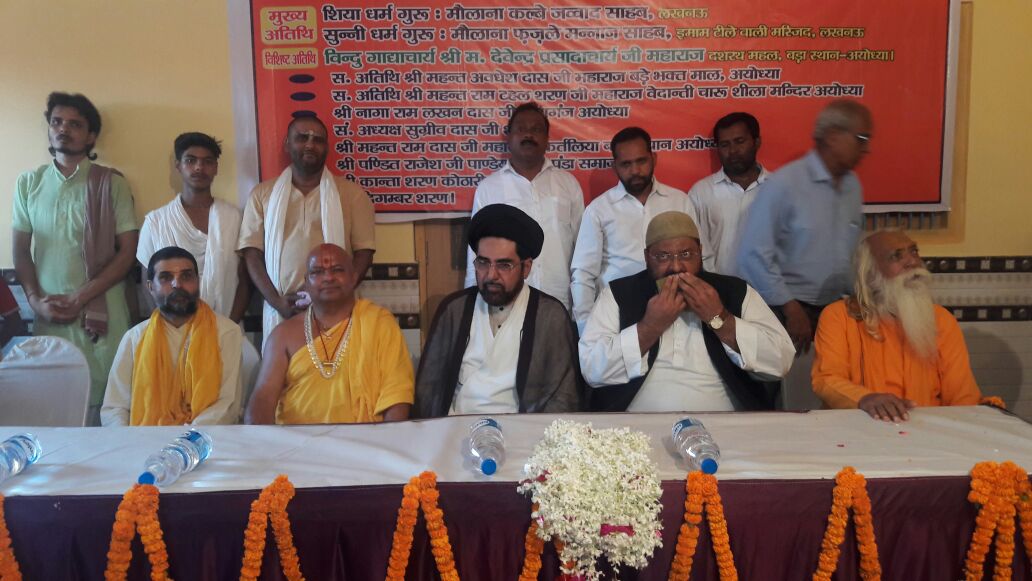 Hindu, Shia and Sunni religious leaders were present at the event held in Ayodhya on Wednesday.

Faizabad/Ayodhya: Even as the Muslim Rashtriya Manch, the Rashtriya Swayamsevak Sangh’s Muslim organisation, held an event to pave the way for the construction of a Ram Mandir on the Babri Masjid site, a different way forward emerged from a communal harmony conference held in Ayodhya on Wednesday that saw the participation of senior clerics from both communities.

Clerics at the conference were in favour of solving the Ram Janambhoomi/Babri Masjid dispute through negotiations.

Convenor of the conference Mahant Janmajay Sharan, chief of the Bara Sthan Janki Ghat temple, said, “To solve the issue of the Ram Janambhoomi, the senior clerics of both Shia and Sunni communities gathered here. The conference was attended by senior Shia cleric Maulana Kalbe Jawwad and Maulana Fazal E. Mannan, the imam of Tile Wali Masjid of Lucknow.”

“The formula which I am trying to adopt is a peaceful negotiated settlement of this Ayodhya issue. The Ram Mandir should be built on the site of the Babri Masjid, and the mosque should be constructed a few yards away from the temple but in the same premises,” he added.

Jawwad said that groups “must try to find out a peaceful solution of this dispute through negotiations,” adding that if no settlement is reached, “the verdict of the Supreme Court is the last option.” “But we should not allow any political party to take the political advantage of the Ayodhya issue,” he insisted.

Speaking to The Wire, Mannan said, “The dispute around the Ram Janambhoomi must be solved in a peaceful manner. Today we gathered in Ayodhya to give a message of communal harmony – that both communities should live in peace.”