The Election Commission has issued notices to eight Assam newspapers which carried a BJP advertisement in the form of a headline claiming the party will win all the seats in the first phase of the election. 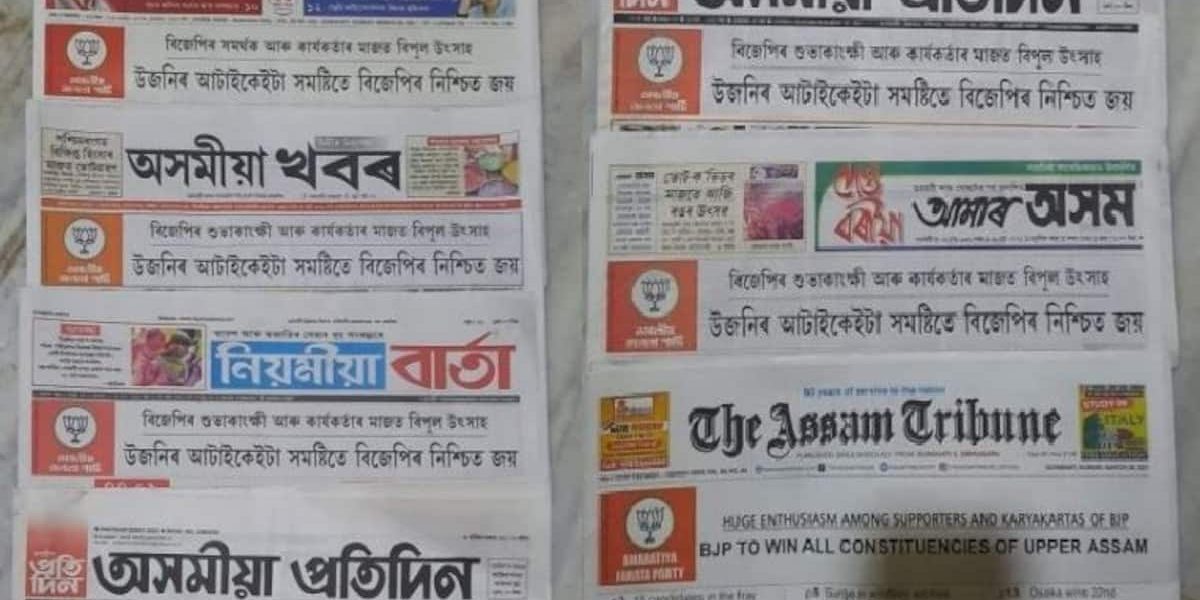 Assam newspapers with an advertisement in the form of a headline declaring BJP will win all the seats in Upper Assam. Photo: Twitter/@the_____thinker

Guwahati: The Election Commission of India (ECI) has issued notices to eight newspapers of Assam which carried an advertisement of the BJP in the form of a headline claiming that the party will win all 47 seats where elections were held in the first phase on Saturday, officials said.

The notices were sent to the newspapers following a complaint filed by the Congress alleging that the advertisement violated a directive of the ECI, the model code of conduct for the election and the Representation of People Act, 1951.

In the notices, Assam chief electoral officer Nitin Khade asked the newspapers to send a report clarifying their position to the commission by 7 pm on Monday. The newspapers have also submitted their reports which were forwarded to the ECI, officials said.

The Congress’s Assam unit had filed a complaint against chief minister Sarbananda Sonowal, party president J.P. Nadda and state unit chief Ranjeet Kumar Dass along with eight leading newspapers, which published on Sunday an advertisement in the format of newspaper headlines claiming the party’s win in all seats for which polls were held on March 27, 2021. The complaint was filed at the Dispur police station on Sunday night.

The state Congress’s legal department chairman Niran Borah said, “This is a blatant violation of the Model Code of Conduct, Representation of People Act, 1951, relevant instructions and media policies issued by the Election Commission of India, by the leaders and members of the BJP, who after realising that their defeat is inevitable [have] resorted to desperate illegal and unconstitutional methods to influence the voters across the state.”

The advertisements have been presented in a manner on the front page of the newspapers to “prejudice the mind of the voters, and this deliberate, malicious and mala fide set of advertisements is in clear violation of Section 126A of the Representation of People Act, 1951, which is punishable by two years of imprisonment and fine,” he added.

The ECI had prohibited the dissemination of any form of prediction/dissemination of news related to election results of Assam between 7 am of March 27, 2021 and 7:30 pm of April 29, 2021, Borah said. The publication of large scale advertisements by the BJP “falsely predicting the outcome of the current assembly election in their favour also amounts to direct violation of the instruction,” he said.

The state Congress had filed a complaint with the Assam chief electoral officer and the All India Congress Committee with the ECI against the publication of the advertisements on Sunday urging immediate action against the BJP and the newspapers.

Congress state president Ripun Bora on Monday accused the BJP leaders of “being confused” and trying to mislead the people of Assam and hide their failure by putting up fabricated advertisements in newspapers claiming that they will win all the seats in Upper Assam. “If the BJP leaders [are] so sure of winning all the seats in the first phase, why did they have to spend crores of rupees by putting up advertisements in newspapers,” Bora said in a press conference here.