Law and order concerns were raised and Section 144 imposed after protesters, led by a Bengali group demanding citizenship for Hindu Bangladeshis, vandalised an All Assam Students' Union office. 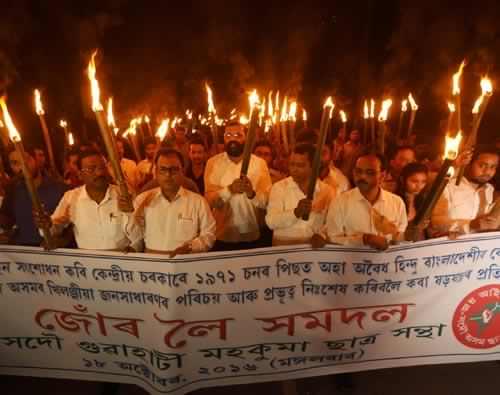 New Delhi: In an unprecedented event even by the turbulent standards of the Assam’s politics in the past few decades, an office of the powerful All Assam Students’ Union (AASU) in Dhemaji district was attacked by a mob, allegedly led by a Bengali organisation demanding citizenship for Hindu Bangladeshis residing in the state and elsewhere.

Kuladhar Saikia, the state’s director general of police (law and order) told The Wire on March 7, “Curfew has been clamped in the area as a preventive measure and nine people have been taken into custody after an FIR was filed by AASU after the attack on March 6”.

According to local news reports, protesters led by the Nikhil Bharat Bangali Udbastu Samannay Samiti (NBBUSS) – spearheading the movement across the country for granting citizenship to Hindu Bengalis by amending the Citizenship Act – organised a meeting in Silapathar town of Assam’s Dhemaji district on March 6. It was attended by the organisation’s state and national level leaders. NBBUSS is a Nagpur-based outfit. Its president, Subodh Biswas, who addressed the meeting, is allegedly associated with the Rashtriya Swayamsevak Sangh (RSS).

Leaders addressing the meeting rejected the Assam Accord, demanded citizenship for all Hindu Bengalis residing in the state and called for an immediate halt to ‘harassment’ under the garb of action against ‘foreign nationals’. They supported the Narendra Modi government’s December 2014 move to  amend the law to grant Indian citizenship to Hindu Bangladeshis, among others, on religious grounds.

According to reports, the NBBUSS thereafter took out a rally through Silapathat that went out of control. Protesters pelted stones at the local AASU office and vandalised it, which led to the police using teargas and launching a lathi-charge.

Police fear the incident could trigger a serious law and order issues in the state, where anti-Bangladeshi sentiments, nurtured by politicians over several decades, run strong. Lately, many civic and students groups have been taking to the streets, strongly opposing the Modi government’s decision to amend the Citizenship Act which they say would violate the Assam Accord.

As per the accord, signed in 1985 by AASU and the All Assam Gana Sangram Parishad with the state government and the central government when Rajiv Gandhi was prime minister, anyone who entered the state after March 25, 1971, would be considered a foreign national and would have to be deported to their country of origin. If the BJP government’s proposed amendment to the Citizenship Act is passed, any Hindu Bangladeshi who has resided in the state for seven years will be eligible for citizenship regardless of when she or he entered Assam.

Currently, the process of updating the National Register of Citizens 1951, is being carried out as per the cut-off date mentioned in the Assam Accord. Approximately, 1.5 lakh Hindus refugees from Bangladesh reside in the state.

Reacting to the March 6 incident, AASU advisor Samujjal Bhattacharyya demanded that the state government arrest the culprits behind the attack. Or else, he warned, “the consequences will be severe”.

In a note released to the press soon after the incident, Bhattacharyya said, “The foreigners’ problems the state has been saddled with must be solved only on the basis of the Assam Accord. Religion has nothing to do with it. The indigenous people must call the shots in Assam, not Bangladeshis.” He also said, “The present ruling dispensation in the state came to power with a promise to safeguard the interests of indigenous people. After today’s incident, we will closely watch what steps the government takes in the coming days.”

Assam is ruled by the Bharatiya Janata Party-led National Democratic Alliance, which came to power after defeating the Congress in the assembly elections in 2016.

AASU president Dipanka Nath said, “Due to indulgence from the BJP government, such groups are getting the opportunity to flex their muscles. The central government’s plan to give to citizenship to Bengali Hindus has emboldened them to react in a violent way. We oppose the Citizenship Bill tooth and nail and those (Hindus or Muslims) who came to the state after March 25, 1971, should go back to their countries of origin.”

The incident has also been condemned by the pro-talks faction of the United Liberation Front of Asom (ULFA). One of its senior leaders, Mrinal Hazarika, urged “all ULFA and ex-ULFA members” to join AASU in its fight against the incident. He also asked on social media, “Who is giving so much power and support to those forces opposed to Assam and the Assamese people?” and wondered whether the ethnic Assamese  would come out in protest after the incident.

DGP Saikia ruled out further violence in the area, stating, “Section 144 is in place as a preventive measure. We rushed security forces to the area soon after the incident, so the violence couldn’t spread. We have also issued an alert to the police forces in all the districts.”

D-voters are those whose voting credentials are in doubt.

The Wire attempted to contact Hiranmay Sarkar from NBBUSS’s Dhemaji chapter and Prasen Raptan from the national chapter but failed to get a response till the time of publication.

The issue was raised in the state assembly on Tuesday. State finance minister Himanta Biswa Sarma told reporters that the Assam government has formed a committee headed by the additional home secretary to look into the matter and asked it to submit its report within a month.

As per local news reports, an all-party fact finding team also left for Silapathar on March 7.