Day 2 of Assam Polls: What Makes These 8 Constituencies the Most Crucial? 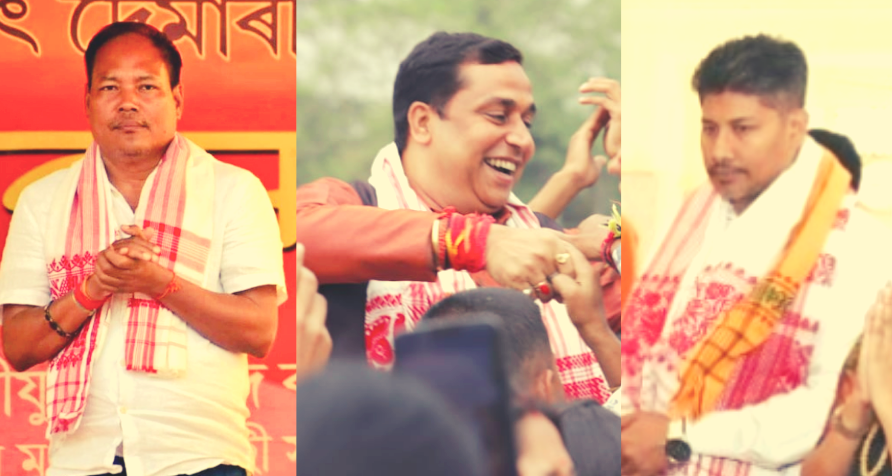 Biswajit Daimary, Jayanta Malla Baruah and Pijush Hazarika, all in the poll fray on April 1 from Assam. Photos: Twitter

Guwahati: Polling for the second phase of the Assam assembly election began at 7 am today, April 1.

In the second phase of elections in the northeastern state, voting will be completed in 39 constituencies.

While voting in 47 seats was completed on March 27, the third phase of polling, to be held on April 6, will cover the remaining 40 of the total 126 assembly seats of the state

While the two major contenders – the BJP and the Congress – are contesting 34 and 28 seats respectively, the BJP ally Asom Gana Parishad (AGP), is trying its luck in six seats.

The newly formed party contesting on the anti-Citizenship Amendment Act plank, the Assam Jatiya Parishad (AJP), will test its electoral luck in 19 of the 39 seats in this phase.

With no wave in favour of the BJP in these elections, unlike in 2016, each phase is crucial for the party to retain power. Prime Minister Narendra Modi has been leading the party’s campaigns with marathon rallies in this phase of polling too. Rallies by Union ministers and party national president J.P. Nadda has kept the BJP campaign busy.

Electioneering by the opposition Congress, which is giving BJP and it’s allies a stiff fight along with nine other parties as part of a common pre-poll alliance, was led by senior Congress leader Rahul Gandhi in this phase.

Some of the key constituencies going to polls today are: