Assam Citizen Register Set to Miss Yet Another Deadline

The Registrar General of India has sought permission from the Supreme Court to push the deadline for updating the National Register of Citizens in Assam to July 31 2018. 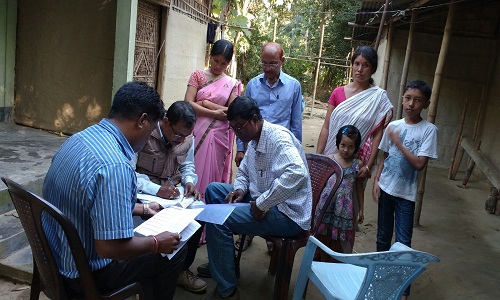 New Delhi: The process of updating the National Register of Citizens (NRC) is set to miss another deadline as the office of the Registrar General of India (RGI) has submitted before the Supreme Court that the task of preparing the updated NRC would be completed by July 31, 2018.

The ruling BJP government, which came to power in Assam  in 2016, had announced early updation of NRC as one of its poll promises.

Submitting a special leave petition before the two-judge bench of the apex court on November 15, the RGI, represented by the state coordinator for NRC, Prateek Hajela, reasoned in a status report that around 2 crore of the 3.21 crore applications have only been verified till now.

The court has set the next hearing on the issue for November 22.

The 1951 NRC is being updated for Assam as per a tripartite agreement between All Assam Students Union (AASU), the state and central governments in 2005 to implement the Assam Accord signed in 1985 to find a solution to the six-year-long student’s movement against “illegal immigrants from Bangladesh”. The entire process of updating the NRC  is being closely monitored by the apex court.

During a hearing on August 24, the SC had asked the state coordinator to prepare a partial and draft NRC by December 31, 2017. It had asked for a partial draft NRC as 48.09 lakh applicants had submitted only a certificate of the gram panchayat secretary to establish their link to their respective families and thereby prove their Indian citizenship.

Though a state cabinet decision in 2010 had made such a certificate a valid link document, the Gauhati High Court, this past February, ruled against it stating it as “unconstitutional” and having “no statutory sanctity”.

In response to some special leave petitions filed by the victims and others in the SC challenging the HC judgment, the bench had asked the state NRC coordinator to segregate the “original inhabitants” out of those 48.09 lakh applicants, mostly belonging to Muslim women of East Bengal origin. Hajela, on October 12, submitted to the court that 17.40 lakh of them are “original inhabitants”.

Since there is no definition of “original inhabitants” in the constitution or under Clause 3 of the Schedule of the Citizenship Rule 2003 (Registration of Citizens and Issue of National Identity Cards), and no guideline in this regard had been decided upon by the RGI, questions were raised by opposition parties and civil society organisations about how did the NRC coordinator reached that figure. On November 1, Hajela, in a press conference in Guwahati, clarified that “no categorization such as original inhabitant or otherwise will be made in the NRC”.

The fate of about 30 lakh such applicants now lie with the SC.

Earlier, with the deadline of December 31 nearing, the state government reportedly feared violence leading to a law and order situation and sought additional central forces from the home ministry to deal with the issue.

This past November 14, state chief minister Sarbananda Sonowal met union home minister Rajnath Singh in New Delhi and reportedly discussed the current status of the NRC update and the Naga Framework Agreement. Besides the controversy over “original inhabitants” in the NRC update, there has been growing protest in the state against the ‘Framework Agreement’, fearing that Assam’s territorial integrity would be compromised.

It is being widely believed that the home ministry has decided to push the deadline for the NRC update in Assam to July next year keeping in mind the Framework Agreement, which is most likely to be finalised and made public by this year end.