FIR Against Gajendra Singh Shekhawat, Others for in Rajasthan Audio Clip Case

These tapes purportedly feature MLAs who have been supporting Pilot – Bhanwar Lal Sharma and Vishvendra Singh –  conversing with BJP minister Gajendra Singh Shekhawat and another intermediary. 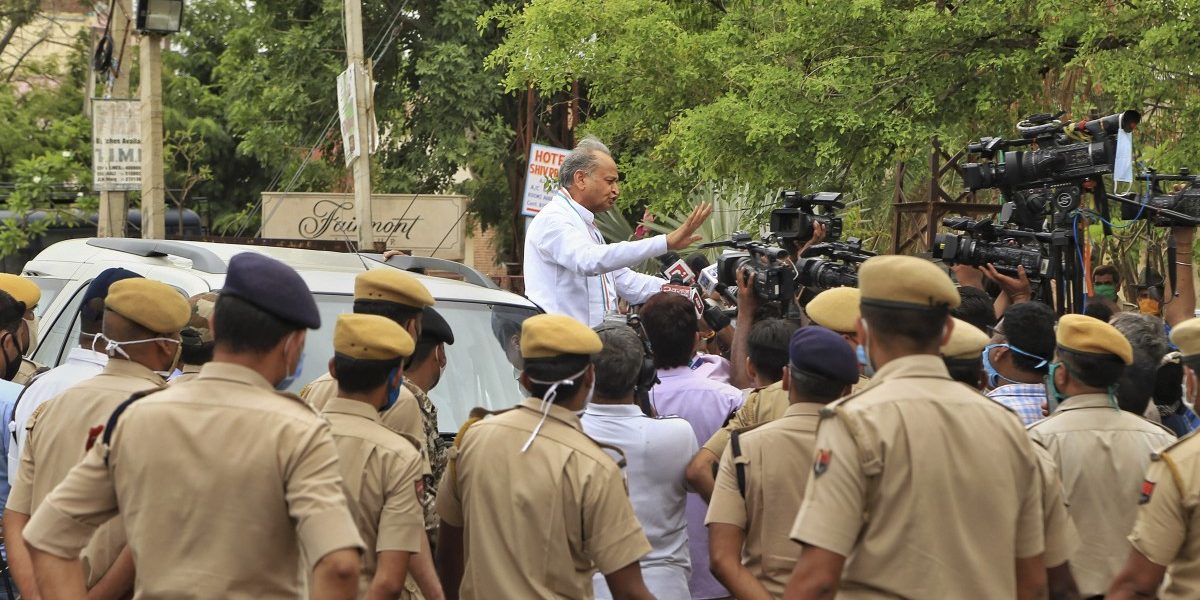 Jaipur: The showdown between Ashok Gehlot and Sachin Pilot turned even more intense on Thursday when the former leaked a set of three audio tapes to the media.

These tapes purportedly feature MLAs who have been supporting Pilot – Bhanwar Lal Sharma and Vishvendra Singh –  conversing with BJP minister Gajendra Singh Shekhawat and another intermediary, a BJP leader named Sanjay Jain, about their plan to topple the ruling Congress government in Rajasthan. The Wire could not independently verify the authenticity of these tapes.

A day after the audio tapes were leaked, Congress chief whip Mahesh Joshi filed a complaint following which the Special Operation Group (SOG) has filed a case against Shekhawat Sharma and Jain.

Jain has been arrested. Shekhawat has said that it wasn’t his voice, but he is ready to face an inquiry.

Sharma and former tourism minister Vishvendra Singh had their Congress party membership suspended. They have also been served with show cause notices.

In a press conference outside the Fairmont Hotel on Friday, Congress spokesperson Randeep Singh Surjewala said, “The BJP is trying to buy the loyalty of MLAs for Rs 25-35 crore. It is clear from the audio tapes that the BJP tried to topple the Congress government and buy its MLAs.”

Surjewala added that at a time when the whole country is fighting COVID-19, the BJP is engaged in pulling down the Congress government.

Rajasthan BJP president Satish Poonia called the incident shameful and blamed Gehlot for spreading misinformation. “The chief minister’s office is trying to tarnish the image of these leaders using a fake audio clip,” he said.

What’s in the tapes

In one of the recordings, Sharma is purportedly telling Shekhawat in Marwari that they will soon have the support of 30 MLAs, to which Shekhawat replies that this would bring down the Gehlot government.

Shekhawat also says that the MLAs should continue to stay at the hotel until they manage to get others on board.

Sharma is also heard bargaining for a good amount of money, on account of his seniority, from Shekhawat.

In another tape, Sharma is purportedly saying that the MLAs supporting Pilot in Delhi have received the ‘first instalment’ of money.

“Yesterday, you were talking about the BJP’s patriotism, today, India saw your intentions in this audio clip. It is now clear that the BJP is involved in a conspiracy to topple a democratically elected government in Rajasthan. If you believe in ethics, then resign,” he wrote, tagging Shekhawat.

“Sharma had made several attempts [in the past] to topple the government and this time he has ganged up with Sachin Pilot,” reads the press note.

It further alleged that Sharma had offered Gehlot the chance to participate in the conspiracy to topple the then BJP government led by Bhairon Singh Shekhawat, but he refused to be a part of it and didn’t let him succeed.

“When critically-ill Shekhawat had gone to Cleveland for a heart operation, Sharma met Gehlot, sharing with him the conspiracy to topple the BJP government, but Gehlot, who was a Union minister and president of the state Congress, strongly opposed it saying such an act is against morality,” adds the press note.

“Gehlot even met the then Governor Baliram Bhagat and PM P.V. Narasimha Rao regarding this and said that he won’t participate in this kind of conspiracy at any cost. At that time, Sharma distributed money to the MLAs. An MLA had told Shekhawat that he was given Rs 5 lakh,” it says.

“When Shekhawat returned and Governor Bhagat told him about the role of Gehlot, he got emotional.”