Joshi was the education minister in the first Gehlot government, and that's when the tensions began. 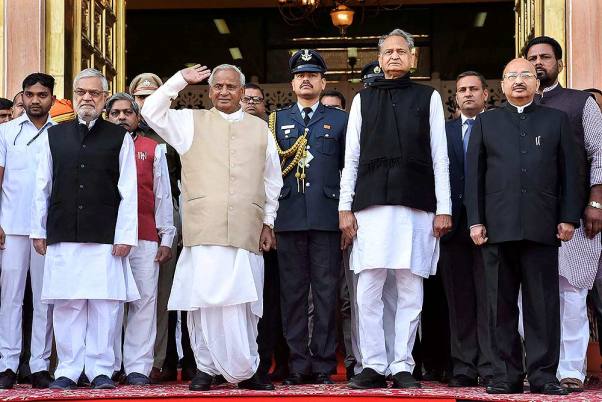 Jaipur: The Ashok Gehlot government in Rajasthan is eyeing the disqualification of rebel Congress MLAs supporting Sachin Pilot, so that proving its majority becomes easy. The Gehlot government’s fate depends on the decision of state assembly speaker C.P. Joshi, a well-known rival of the chief minister.

Joshi and Gehlot have never been comfortable working with each other, because of which Joshi was given the post of speaker in the state this time.

“Joshi is a strong-headed leader. If he was made a minister, he would have challenged Gehlot’s authority over his department, something which Gehlot couldn’t stand,” Rajendra Bora, a Jaipur-based political analyst, told The Wire.

Born in Rajasthan’s Kunwaria in Rajsamand district, Joshi holds a doctorate in psychology and a law degree. He was working as a lecturer when former chief minister of Rajasthan Mohanlal Sukhadia discovered him and gave hired him for his election campaign. Delighted with his victory in that election, Sukhadia passed over several veterans to give Joshi a ticket in 1980. Joshi was 29 when he became an MLA for the first time.

Joshi rapidly gained popularity in Rajasthan. He was elected four times from the Nathdwara seat. He held the education portfolio in the first Gehlot government in Rajasthan in 1998, and that’s when they were at loggerheads for the first time.

“The Anil Bordia-led Lok Jumbish project that helped Rajasthan improve its literacy was opposed by Joshi,” says Bora. “He wanted more government control over the project, but Bordia considered it to be a people’s movement. This created outrage among the public and Gehlot was at the receiving end.”

Bordia, a former civil servant and popular educationist, had even accused the Gehlot government of discontinuing Lok Jumbish by extending the World Bank-funded District Primary Education Programme programme in the state.

Bora says after this incident, Gehlot became cautious of Joshi.

Also read: Not Knowing Where Else to Go, AAP Is Moving Further to the Political Right

By the year 2008, Joshi had risen to the position of president of the Rajasthan Pradesh Congress Committee. He was even considered a front-runner for the chief ministerial position during the 2008 assembly elections. However, he lost that election by just one vote, and Gehlot was made the chief minister for the second time. Many believe that it was Gehlot’s plan to sideline Joshi.

Recalling Joshi’s election, former chief election commissioner S.Y. Qureshi had said, “After the counting, Joshi asked the Returning Officer to recount the postal ballots, assuming that there could be some human error. It was done in 20 minutes and the result did not change. Again, Joshi asked them to re-tabulate the total of each machine. The Returning Officer did that too but the result was same.”

Joshi was soon given a ticket from Bhilwara in the 2009 Lok Sabha election, and he marched towards the Centre as Gehlot expanded his base in Rajasthan.

Joshi was made the minister of panchayati raj (2009-2011) in the UPA government to handle MGNREGA, the Congress’s flagship scheme. In a reshuffle, he got the charge of road transport and highways minister from 2011 to 2013. Joshi received an additional charge of the railway ministry after Mukul Roy resigned in 2012.

While Joshi is a Gandhi family loyalist, his relationship with Gehlot is heavily strained.

During the campaigning for the 2013 state assembly elections, Joshi didn’t share a stage with Gehlot even once during the party’s ‘Sandesh Yatra’, launched against the BJP’s ‘Suraaj Sankalp Yatra’.

He even skipped a rally in the Mewar belt, where he has a decades-old connect and enjoys humongous local support.

Joshi was assigned the charge of Bihar, but was replaced in 2018 by Shaktisinh Gohil as an effort by the Congress party to push forward young leaders.

However, recently in 2019, Joshi helped Gehlot’s son Vaibhav to become Rajasthan Cricket Academy (RCA) president, indicating that the two have moved on.