The party is contesting 14 out of 24 seats in the Seemanchal region and hoping to win 10 seats in total. But observers believe it's unlikely that it will win more than three or four seats.

New Delhi: All India Majlis-e-Ittehad-ul-Muslimeen (AIMIM) chief and Hyderabad MP Asaduddin Owaisi’s election rallies during the campaign for the Bihar assembly elections may have drawn large crowds but analysts who have their ears to the ground say that it is unlikely that the party will emerge as a major player in state politics.

“Out of the 20 assembly seats that AIMIM is contesting, only on six seats are they facing a close contest,” Tanzil Asif, a journalist based in Kishanganj told The Wire, adding that for the rest of the seats “it will be a saving grace for the party if its candidates do not lose their deposits”.

In the last assembly elections in 2015, the party had failed to open its account, when it contested on six of the 243 seats in the state assembly. This time around, AIMIM is contesting in 20 assembly seats as part of the Grand Democratic Secular Front (GDSF) that has several other parties, including Mayawati’s Bahujan Samaj Party (BSP) and Rashtriya Lok Samata Party (RLSP) led by former Union minister Upendra Kushwaha.

Even though the party could contest in 24 seats as a part of this alliance, it is in the fray in only 20 of them. This is because four candidates’ nominations either got cancelled or they did not file in the first place.

Most of the seats AIMIM is contesting fall in the Seemanchal region, comprising of four districts — Kishanganj, Araria, Purnia and Katihar. The party is contesting in 14 seats out of 24 seats in the region and hoping to win 10 seats in total but observers believe that it won’t be able to win more than three or four seats.

“Even in the best case scenario, I don’t think MIM has any chance beyond three-four seats,” a journalist, who is currently covering the region for a national English daily, told The Wire. The party is contesting on all the six assembly seats which come under the Lok Sabha constituency of Kishanganj.

AIMIM, a small player in GDSF

“AIMIM is the fourth largest party in the six party Grand Democratic Secular Front (GDSF). It is contesting on just 20 out of 243 seats. Its allies RLSP and BSP are contesting on far more number of seats, which makes the AIMIM a small player in GDSF alliance,” said Asif.  “Moreover, AIMIM is in a triangular contest in just six seats. It can’t get more than that number of seats even they win all of them. Which is not enough to make it a significant player,” he added.

It is believed that if the party has the strength and if its support is required, it is likely to back the RJD-led Mahagathbandhan. The party was previously willing to form an alliance with the RJD.

Former RJD MLA and state president of the party, Akhtarul Iman is also contesting elections from the same region. In the 2019 Lok Sabha elections, he finished third from the Kishanganj seat and enjoyed a considerable hold over several seats in the region. In the 2015 assembly elections, when he first contested on a MIM ticket, he was defeated by then Mahagathbandhan candidate Mujahid Alam on Kochadhaman seat.

Iman was the MLA from Kochadhaman between 2010 and 2014 and prior to that, he was a two time MLA from Kishanganj. In 2014, he quit the RJD to contest Lok Sabha election on JDU ticket from Kishanganj. However, in this election, he is contesting from the Amour assembly seat, which comes under the district of Purnia. Iman has been instrumental in establishing the AIMIM in the region.

The six seats where the party is likely to fight a close contest and secure possible victories are Kishanganj, Baisi, Jokihat, Kochadhaman, Bahadurganj and Amour. Notably, most of the candidates contesting these seats have had some sort of political career before joining AIMIM or contesting on its tickets. Hence, if they win, it would not be only because people in the region supported Owaisi or preferred a ‘Muslim party’ but also because they already have certain clout in the area. Moreover, ever since Iman joined the party, local leadership and supporters have undertaken relentless work at the ground level.

Owaisi is not the only factor in elections

The MIM candidate from Baisi, Syed Ruknuddin, for instance, is a former MLA and in the 2005 assembly elections, he had defeated the RJD nominee as an independent candidate. Ruknuddin’s father was also an MLA.

The MIM’s candidate from Jokihat, Shanawaz Alam is also a sitting MLA. Alam is the son of a former Union minister and MP from the region. He won a by-election 2018 on an RJD ticket but this time he is contesting from MIM’s ticket against his own brother and former MP, Sarfaraz Alam. The MIM candidate from Kishanganj is sitting MLA, who opened the MIM’s account in Bihar by winning a bypoll last year. The AIMIM state chief had been two-time MLA from this seat. Similarly, other candidates have also been politically active over the years and have been elected in panchayat and other local elections.

Regarding the crowd at Owaisi’s rallies and the buzz on social media for AIMIM, an observer told The Wire that all those attending the rallies were not necessarily voters, let alone voters of the party. “Many just come to hear and see him as he is a very good speaker and often raises their issues in parliament and other forums”. According to the observer, MIM supporters are very active on social media and vocal even otherwise, hence the ensuing buzz about the party. “Moreover, since Owaisi enjoys good media coverage it helps them in further amplifying the impression that AIMIM is a major force in the state,” he added.

However, with the entry of AIMIM and Owaisi into region’s politics, local issues have gained national prominence and now other parties have also started talking about the region’s development.

This has, notably, been a long-standing demand of MIM and Owaisi. According to a news report from November 2015, the AIMIM chief demanded that a ‘Seemanchal Region Development Council’ be set up to end the backwardness in the region.

“It is quite impossible to bring all-round development in the region without the setting up of a Seemanchal Region Development Council. It would work to end backwardness and misery of the region,” Owaisi reportedly said at an election meeting in Bishanpur in the Kochadhaman assembly constituency, where AIMIM’s state unit chief, Akhtarul Iman, was a contestant. Ever since then he and his party have been raising demands for the same. 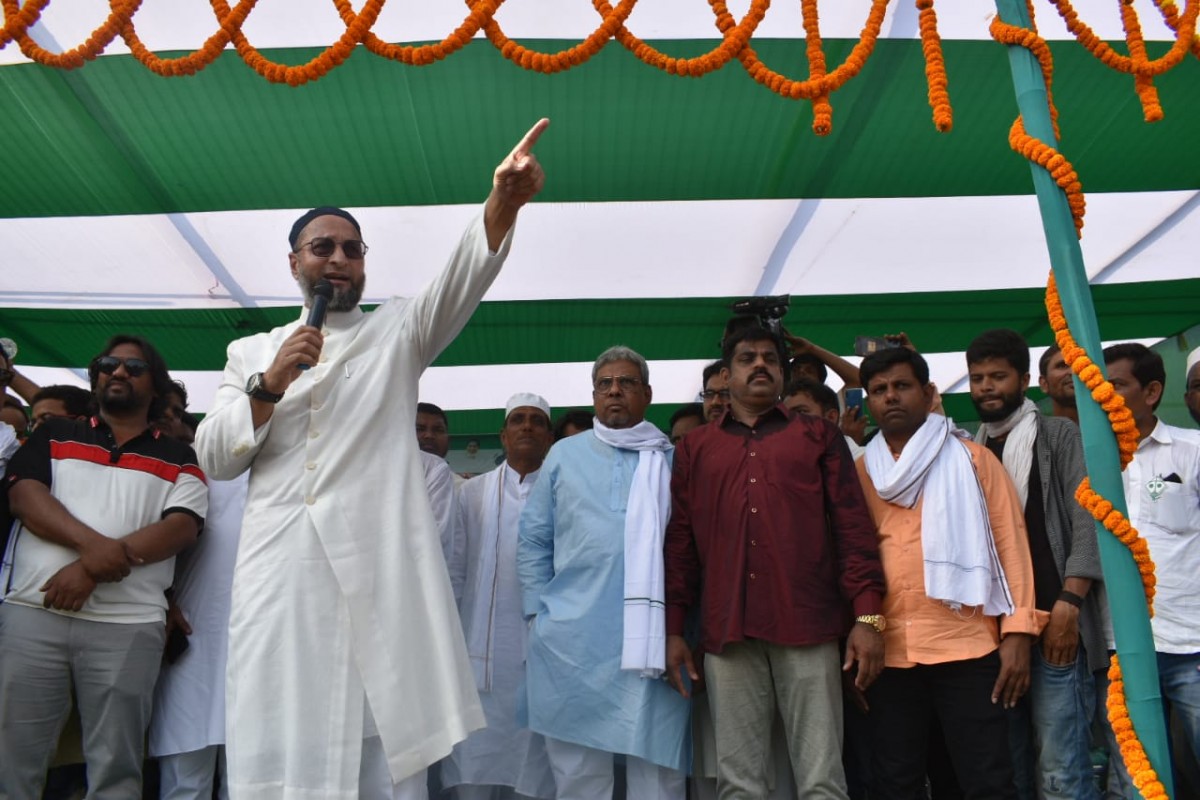 Asaduddin Owaisi at an election rally in Bihar. Photo: Twitter/syedsulaiman92

In fact, in August 2018, he introduced a private member’s bill in the Lok Sabha, which sought the establishment of a regional development council for Seemanchal region under Article 371K. The Hyderabad MP argued that Seemanchal was the most backward region in the country with the lowest Human Development Index (HDI). Census and other official data support his claims about the region’s socio-economic and educational backwardness.

According to an analysis by researcher Shahana Munazir in The Hindu, “Seemanchal fares poorly on welfare indices. It is an example of political apathy towards the minorities.” Citing the latest Census data, she noted in 2019, “the average literacy rate of the four districts is 54% as against Bihar’s average of 64%. The average per capita district GDP of the region is ₹10,000, while it is ₹14,574 for the State. In districts with a higher density of Muslims, the situation is worse. For example, in Kishanganj, with a 68% Muslim population, nearly 50% live below the poverty line.”