As Hindutva Toughs Run Riot in UP, Will Adityanath Enforce the Law on His Own Cadre?

If the rioting by ruling party affiliates had occurred in the earlier regime, the BJP would have charged "goonda raj". Now the boot is on the other leg.

What will UP chief minister Adityanath do to curb violence by Sangh parivar outfits? Credit: PTI

Lucknow: Yogi Adityanath took over as chief minister of Uttar Pradesh amidst claims by the Bharatiya Janata Party that keeping a strict watch on the maintenance of law and order would be his forte. However, on Saturday a group of men drawn from militant Hindutva parivar outfits like the Vishwa Hindu Parishad, Bajrang Dal and Hindu Yuva Vahini, which was founded by Adityanath himself, attacked the Fatehpur Sikri police station in Agra, pelted stones at police personnel and slapped the deputy superintendent of police who had filed an FIR against some of their activists for assaulting and robbing a Muslim vegetable vendor.

Newspaper reports say a local BJP leader, Hemant Tiwari, was also present when the Sangh activists assaulted the policemen. The audacious attack by Hindutva activists shows how emboldened the right-wing forces have become after the BJP’s landslide victory in UP.

Ironically, this incident happened just after the new director general of UP police, Sulkhan Singh, took over on Saturday and warned of tough action against cow vigilante groups who break the law.

What happened in Fatehpur Sikri is not an isolated incident. Just two days earlier, on April 20, a communal riot broke out in Saharanpur in which dozens were injured and the house of a senior superintendent of police, Luv Kumar, was attacked by a mob led by a local BJP MP.

The senior superintendent of police (SSP) told the Times of India on record that BJP MP Raghav Lakhanpal Sharma had led the mob to his residence and incited them to vandalise the place. The police officer’s family was still inside the house and in a state of panic when this happened. The mob vandalised the property and broke the name plate and CCTV cameras installed outside the SSP’s house. The BJP MP has been named in the FIR.

How do these two incidents square with the BJP’s claim that Adityanath is very strong and resolute on the law and order front? Will Adityanath proceed against the members of the BJP, Bajrang Dal and Hindu Yuva Vahini who have been named in the two serious cases of mob violence which occurred in the past one week?

Adityanath will have to contend with the larger issue of militant Hindutva outfits, including cow vigilantes, who are not only taking the law into their own hands but are even assaulting senior police officers. Several analysts, including media persons, had said at the time of the controversial yogi’s swearing-in that Adityanath should not be judged by his past but be given a chance to prove his mettle as an administrator. Within a few weeks of taking charge, the chief minister is being tested and that too by his own brethren in the Sangh parivar. 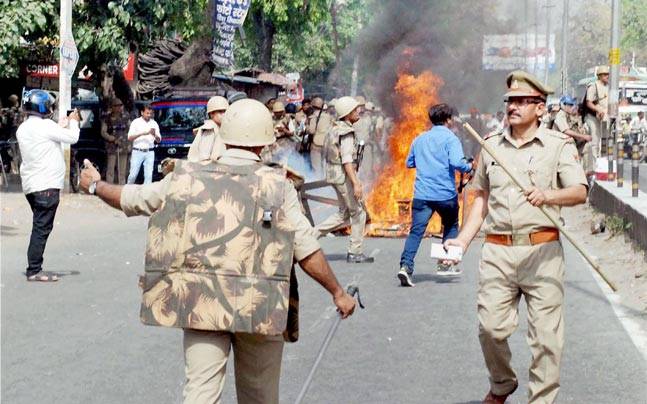 Apparently, the Saharanpur rioting happened because local Dalit and Muslim groups took out a procession for Amebdkar Jayanti on April 14. Not to be left behind, the BJP and some other assorted Sangh parivar outfits decided to take out their own procession some days later to mark Ambedkar divas. This procession, led by the BJP MP, turned violent and eventually, the participants attacked the SSP’s house.

These may seem like stray incidents but they do signify a growing militancy in the Hindutva cadres which feel on top of the world after the UP assembly victory. With the BJP now ruling the state, Prime Minister Narendra Modi cannot possibly argue that law and order is a state subject and the local state government is responsible for bringing such wanton violence under control.

If the Saharanpur and Fatehpur Sikri violence had occurred during the tenure of the earlier regime, the BJP would have gone to town with the charge of “goonda raj” against the Samajwadi Party. Now, the boot is on the other leg. Whether it is the Saharanpur rioting or the killing of dairy farmer Pehlu Khan in Rajasthan, the prime minister, the BJP and the Centre are all  answerable as such violence is happening in BJP-ruled states. People are watching closely to see whether justice is being dispensed without fear or favour.