The failure of the Modi government to discuss and vote on the motion, which has been pending since last week, has not sent out the right signals. 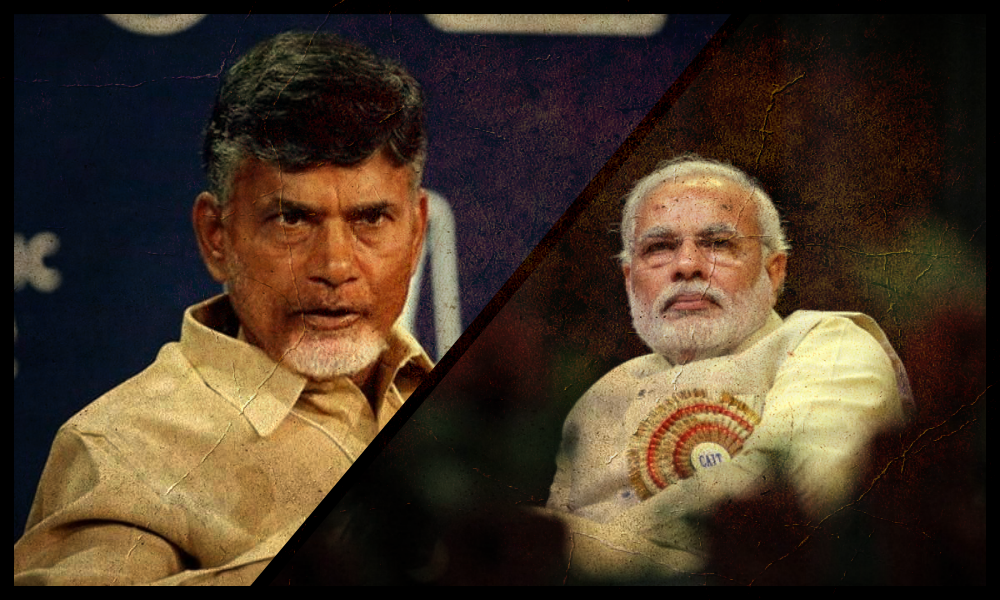 TDP will move a no-confidence motion against the government in Lok Sabha. Credit: Reuters

With the move for a no-confidence motion against the Narendra Modi-led government, opposition parties have hit the nail right on the head. And it has come at a time when the prime minister is going through a rough patch, to put it mildly.

Though the first such motion against the four year-old Modi led-National Democratic Alliance (NDA) regime, it the 27th such occasion in independent India when a no-trust motion has been initiated against an incumbent government in the Lok Sabha.

Although the special category status for Andhra Pradesh was the immediate trigger for the action, there are numerous reasons for the opposition to initiate the move.

At the moment, it appears as if nothing is going right for the Modi dispensation as a socio-political-economic cocktail is exposing the tall claims of the Bharatiya Janata Party (BJP) on issues of governance and its invincibility. The ill effects of demonetisation, faulty implementation of the Goods and Services Tax (GST), agrarian crisis, and unemployment have ensured that Modi’s cup is full of economic woes. The Nirav Modi scam might just be the proverbial last straw on the camel’s back.

To make matters worse for the government, opposition parties are suddenly raring for a fight; friends are either turning into foes or becoming restive and past ‘sins’ are suddenly catching up. To cite an example, a dissident BJP leader and former finance minister recently sought to give Modi the sobriquet ‘Mohammed Bin Tughlak’, referring to the disastrous consequences of the demonetisation move brought by the 16th century leader.

Sulking BJP MP Shatrughan Sinha expressed his feelings differently  by pointing out that arrogance, overconfidence and short temper will not do either Trump, “mitron” or the opposition leaders any good. And everyone knows who “mitron” refers to.

If one cared to look at it dispassionately, the by-poll verdicts of Gorakhpur and Phulpur are a sign of bad times for BJP and the Modi dispensation, especially since the Lok Sabha elections are only a year away. The upset caused by the party in Tripura is all but forgotten. BJP chief Amit Shah may be putting up a brave face, but their convincing defeat in the Uttar Pradesh and the Araria by-polls in Bihar have dealt severe blows to the ruling party, stunning the leadership.

That the prime minister has not uttered a single word on these losses speaks volumes of the shock he must have suffered. It seems that Modi, who was once sarcastically hailed as event manager par excellence by his guru L.K. Advani, has pressed the mute button.

And this silence has brought a spring in the step of the opposition parties and hence the no-trust move. Government managers are realising, much to their discomfort, that every action has an equal and opposite reaction.

Besides, the failure of the Modi government to discuss and vote on the motion, which has been pending since last week, has not sent out the right signals. The plea taken by the presiding officer, that the House is not in order, is being interpreted as government’s reluctance to face the vote.

Detractors say that a government, which could pass the Finance Bill in less than half an hour without any discussion when the House was not in order, is making a lame excuse in this case. It is also possible that the Centre is tying up loose ends using the disorder in the House as an excuse.

The scene has taken a turned bitter turn now. Opposition parties are accusing the prime minister of not taking any interest in breaking the three week-long impasse in both the Lok Sabha and the Rajya Sabha, despite their wish to debate the Nirav Modi scam, the issue of special category status for Andhra and the Cauvery issue. It is strange but the opposition is claiming that no government manager, including the parliamentary affairs minister, has approached them for resolving the impasse.

The fact of the matter is that BJP losing so badly in the pocket borough of chief minister Yogi Adityanath and deputy chief minister Keshav Prasad Maurya, has not only been a bolt from the blue but has turned out to be the worst nightmare for the ruling dispensation. The defeat in the Bihar by-poll has only aggravated the matter.

It is no coincidence that the Andhra Pradesh chief minister, N. Chandrababu Naidu, has parted ways with the NDA and initiated the no-confidence motion. Naidu suspected that the BJP planned to join hands with his arch rival in the state, Jagan Mohan Reddy of the YSR Congress, ahead of the state assembly polls scheduled along with the Lok Sabha polls. However, Reddy has also pressed for the no trust vote to pander to his constituency back home. If the debate on the motion leads to a denial of special category status to Andhra Pradesh, Naidu’s party is expected to paint it as Modi’s “discrimination” against the South.

The reality as it is

However, anyone nurturing hopes of such a motion leading to the collapse of the Modi government is living in a fool’s paradise. So far, no government in India has been voted out through a no-confidence motion.

With respect to numbers, BJP is comfortably placed as the ruling party has a simple majority on its own in the 543-member House in spite of losing more than half a dozen seats in the bypolls. The Modi wave ensured the BJP 282 seats in 2014, marking a case of clear majority for a national party after 30 long years.

Sulking ally Shiv Sena, which has a strength of 18 in the Lok Sabha and is the second largest party in the NDA, has sided with BJP by declaring the no-trust exercise as “futile”. The Sena is, however, happy that the move has punctured BJP’s confidence of remaining in power at the Centre for 25 years.

Smaller constituents of the NDA like the Shiromani Akali Dal, the Lok Jan Shakti Party, the Rashtriya Lok Samata Party, Janata Dal (United) are also expected to support the government despite some of them becoming restive.

With the third largest number of members (37) in the Lok Sabha after the BJP and Congress, the All India Anna Dravida Munnetra Kazhagam could use the motion as an opportune moment to pressurise the Centre to set up the Cauvery Management Board and Cauvery Water Regulatory Committee. The party has not taken a decision on the issue so far.

The 20-member Biju Janata Dal, led by Odisha chief minister Naveen Patnaik, has been maintaining a policy of equidistance from both the Congress and BJP. It has not participated in any of the opposition group meetings which aimed to bring the parties closer.

Naidu’s decision to part ways with the NDA must have been prompted by his calculation that BJP was no longer the winning horse after the disastrous bypoll results. The TRS, led by Telangana chief minister K Chandrasekhar Rao, has been caught in a dilemma as it does not want Naidu to gain a footing in national politics, but at the same time it cannot afford to ignore the issue of special category status for Andhra Pradesh. An appropriate decision at the appropriate time, appears to be refrain of the party at the moment. Rao is a leading light of the ‘Third Front’ along with West Bengal chief minister Mamata Banerjee. And the TDP has asserted that Mamata will be backing the no-confidence motion being moved by the party.

The opposition wants to show Modi and his government in poor light and deflate his claims of ‘Sabka saath, sabka vikas”. The Nirav Modi scam has come in handy to question the prime minister’s claim of “Na khaunga, na khane dunga”.

The occasion will probably be utilised by the detractors of the BJP to accuse the prime minister of launching a political witch hunt against opposition leaders through the CBI and the Enforcement Directorate. It is a fact that CBI and ED are now working overtime as never before but whether it is because of ‘corrupt’ politicians is a matter of research and debate.

The Congress will also try to use the occasion to maintain that it is the only party that can lead the nation, like it did in the UPA days. The whole exercise of the Congress plenary was to spread that message to like-minded parties; ‘together, we can do it again’ under the leadership of Rahul Gandhi. Sonia Gandhi, who ensured that her son succeeded her as the Congress president, now wants to see him as the next prime minister and seems to be doing everything possible for that to happen.

With Modi’s failure to bring “achhe din”, it is time for the Congress to remind people of the “good old days of the UPA”.

No-confidence motions from the past

The last time a no-confidence motion was moved was by the Congress on August 18, 2003, against the Atal Bihari Vajpayee government. Incidentally, Congress governments have faced 23 such motions in the past.

Barring one, which remained inconclusive, all the no-trust motions in the past were defeated. Incidentally, the last motion against the Vajpayee government came after almost four years of his second consecutive term.

Ironically, a record 15 such motions were moved against governments led by Indira Gandhi, mother-in-law of Sonia Gandhi, who tabled the no-trust motion against the Vajpayee government. Next in line were the governments headed by Lal Bahadur Shastri and P.V. Narasimha Rao, with three motions passed against both of them.

One of the motions against Indira Gandhi was moved in March 1967, by none other than Vajpayee himself. 25 years later, Vajpayee also moved a no-confidence motion against Narasimha Rao.

The Rao government also faced a no-trust motion in July 1993, which was moved by Ajay Mukhopadhyay of the Communist Party of India. This was virtually a touch-and-go affair with a margin of just 14 votes, the closest in any no-confidence motion voting.

The government led by Morarji Desai, who headed the Janata Party, was the other non-Congress government against which no-confidence motions were moved. Tabled by Congress leader Y B Chavan in July 1979, it led to the resignation of the prime minister even before it could be voted on. Incidentally, Vajpayee and L.K. Advani were Ministers in the Desai Government.

The first ever no-confidence vote in the history of the Lok Sabha was moved by socialist Acharya Kripalani against Jawahar Lal Nehru in August 1963. Of the 25 such motions moved so far, only four were negated by a voice vote while the rest were decided by voting.

Of around ten confidence motions moved in the House, the Vajpayee government faced one and fell by one vote in April, 1999. His 13-day government also fell in 1996, but that was because he resigned, and the no-trust motion was then not put to vote.

Whenever the motion is taken up, the prime minister will have the unenviable task of sitting through the entire debate, listening to the taunts and digs of the opposition leaders who want to pay the ruling side with the same currency.

For the opposition, the debate on the motion offers a crucial opportunity to expose the omissions and commissions of the government at a time when the Karnataka elections are not far off. Crucial elections in Madhya Pradesh, Chhattisgarh and Rajasthan are scheduled  for 2018, and along with Karnataka, they will set the tone for the Lok Sabha polls next year.

This will be a test for the prime minister to see how he converts the crisis into an opportunity, coming up with a new narrative that can again seize the imagination of the young and the old, rich and poor, oppressed and the powerful. It is easier said than done.