As Narendra Modi Extends His Dominance, Beware the Bulldozer's Effect on the Constitution

Modi’s unchallenged electoral dominance cannot be taken as a license for any kind of prime ministerial overlordship. Electoral mandates in a democracy are a mandate to work within the constitutional framework of restraints and constraints. 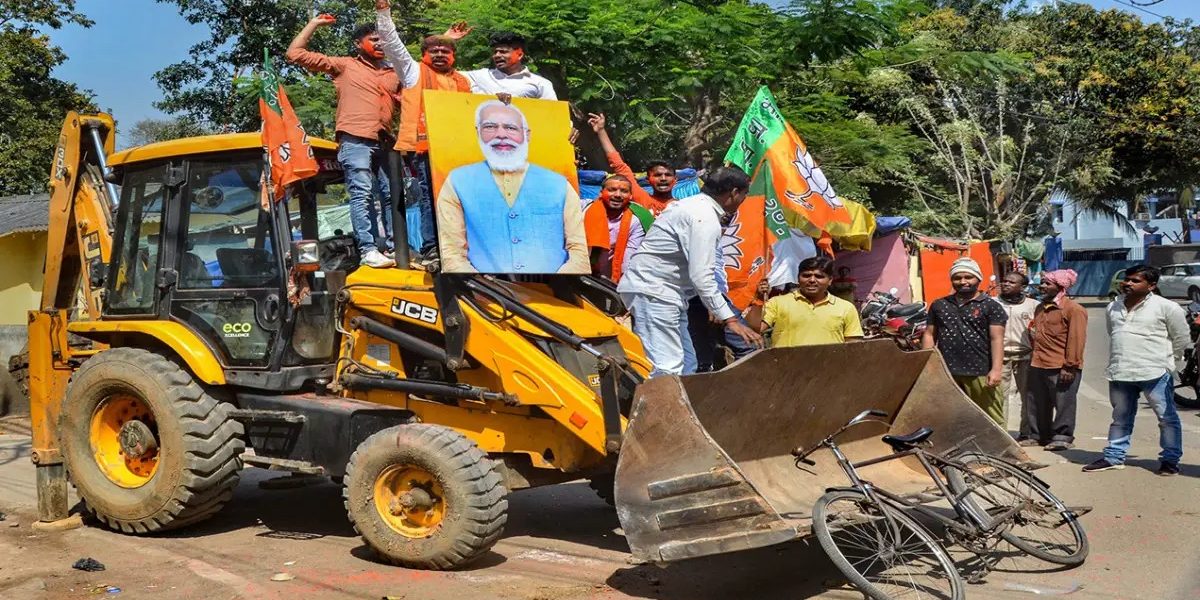 BJP supporters in Ranchi showcase a bulldozer in celebration of the party's victory in the UP Assembly elections. Photo: PTI

Notwithstanding the Punjab voter’s total rejection of the Bharatiya Janata Party, the electorate in Uttar Pradesh and Uttarakhand has spectacularly reaffirmed Narendra Modi’s hegemonic dominance within and outside the Sangh parivar.

Certain Union ministers as well as some functionaries at Nagpur were hoping that the voters of UP would allow them to try to circumscribe the prime minister. But that has not happened. The terrible loss in West Bengal is now a distant memory. The cliques within the BJP will need to bide their time to regroup themselves. All talk of ‘who after Modi’ will have to be rescheduled.

Modi’s extensive and exhaustive campaigning in Uttar Pradesh is deemed to have single-handedly turned the tide away from the unpopular Yogi Adityanath and he is now in a position to manoeuvre the ouster of the monk from the Gorkhanath Math. That will be the principal challenge before Modi – if he wants to renew his credentials, such as they are, as a ‘moderniser’. As chief minister, Adityanath not only symbolises a medieval mindset, he effortlessly managed to annoy almost every single section of the society; and, the prime minister had to go into overdrive to retrieve a lost cause.

The immediate implication for national politics is clear. With the election for president barely four months away, the UP voter has helped the prime minister ensure that Rashtrapati Bhavan does not pass into politically unsympathetic hands. Secondly, his UP triumph will give the likes of K. Chandrashekhar Rao (KCR) in Telangana or even a Naveen Patnaik in Odisha cause to reconsider their plans to move out of the BJP orbit of influence and control. Third, Modi will certainly give a go-ahead to the intriguers in Maharashtra who are working to bring down the Uddhav Thackeray government. Fourth, is now well placed to achieve his dream of crossing the historic high water mark of 145 seats that the Congress had set in Gujarat when the state goes to the polls in December. Lastly – and unwittingly perhaps – Modi will become the catalyst for a much-delayed house-cleaning in the Congress party.

The latest electoral victory does not exonerate the BJP from the charge of using amoral tactics and tricks. Electoral dividends do not equal moral capital. Of course, like every winner in the past, the BJP will seek to impose a grand narrative on the UP vote. It has bragging rights, but that’s about it.

In particular, Modi’s unchallenged electoral dominance cannot be taken as a license for any kind of prime ministerial overlordship. Electoral mandates in a democracy are just that: a mandate to work within the constitutional framework of restraints and constraints. In the BJP’s election campaign in UP, the bulldozer was a metaphor for unbridled executive authority. But just because someone wins a vote does not entitle him or her to claim any kind of immunity from the structures of accountability.

This means that the Supreme Court and the rest of the higher judiciary are not released from their institutional obligation to safeguard the basic structure of the constitution. If anything, the chief justice of India and his colleagues need to watch out for subtle and not-so-subtle executive intimidation and act promptly when needed. If anything, citizens would look to the higher judiciary to protect their fundamental rights and civil liberties against a regime that remains in the thrall of its own dadagiri.

This injunction is equally valid for other constitutional institutions. The Election Commission of India and the country’s armed forces in particular need to summon clarity and courage to stand up to the undemocratic and unconstitutional demands that will be made of them by the newly-reinforced cabal. Election victories and losses are temporary, constitutional obligations are permanent. 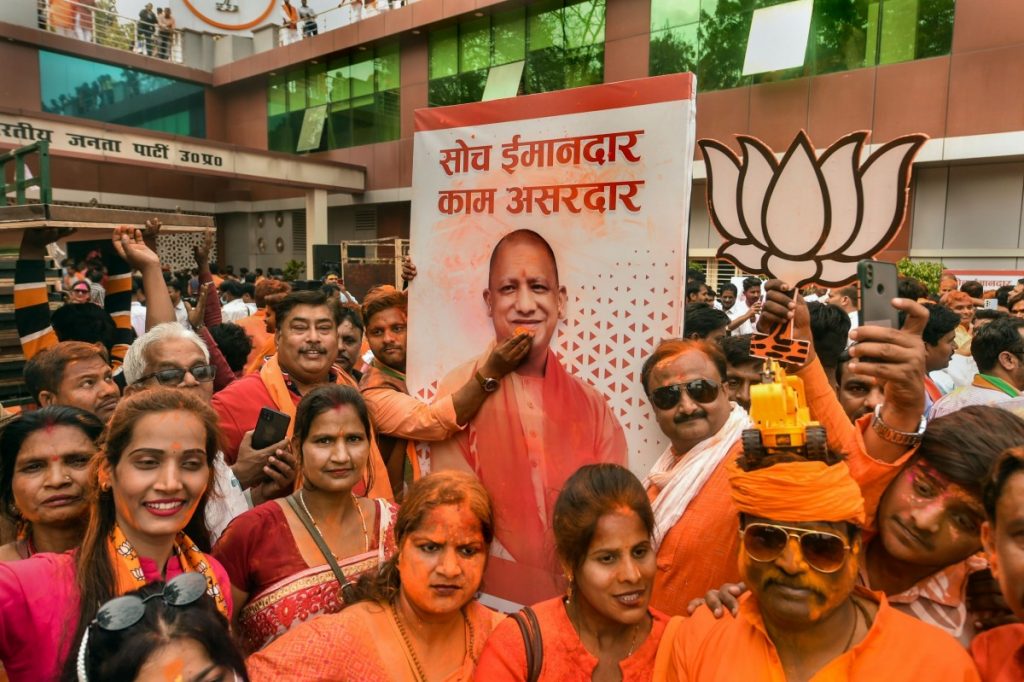 BJP supporters celebrate with colours, as the party heads to a landslide victory, in UP Assembly elections, at the party office, in Lucknow, Thursday, March 10, 2022. Photo: PTI/Nand Kumar

Given the entirely sectarian shape of the UP vote, the radical right-wing may be tempted to hasten further the marginalisation of Muslim Indians, the largest minority in the country. Some ugly voices have already been raised, demanding their disenfranchisement. Apart from being an affront to the constitutional scheme of things, such talk is plainly counter-productive. Any arrangement that denies its very sizeable minority a voice and a place of dignity remains inherently un-civil and destabilising. Of course, any stratagem that is premised on brute majoritarianism runs the risk of challenge from the cornered minority. Wise leadership is obliged to reach out to all sections and regions of the realm; prolonged political neglect breeds resistance and challenge outside the democratic arena.

The Punjab vote, on the other end of the spectrum, is a wonderful reminder that India’s federal arrangement remains anchored in regional diversity and peculiarities. The BJP has perhaps notched its worst electoral performance in Punjab. That too on Modi’s watch. The prime minister’s golden oratory and demagoguery failed to move Punjabi voters. Nor did this most patriotic region of the country allow itself to be taken in by his grand claims to be the only bulwark against the nation’s enemies.

It is anybody’s guess whether the opposition will allow itself to get bamboozled by the BJP’s impressive performance; but, the ruling party certainly cannot arrogate to itself any kind of right to muzzle voices of dissent and disagreement. Similarly, civil society need not retreat from its mission of speaking up for the voiceless sections of our society. A BJP win does not mean that we give up our collective quest for a civilised order.

The republic’s need for an equipoised polity remains unaltered. While there is very little anyone, in and out of the Sangh parivar can do to slow down Narendra Modi’s megalomaniac impulses, this does not mean that he is entitled to discard the injunction of reasonable exercise of reasonable authority.