As India Crosses a Landmark Anniversary, Here Are My Dreams for the Future

For India to live upto its potential by 2047, it must draw on the best of its 75-year history, while acknowledging pressing challenges ahead. 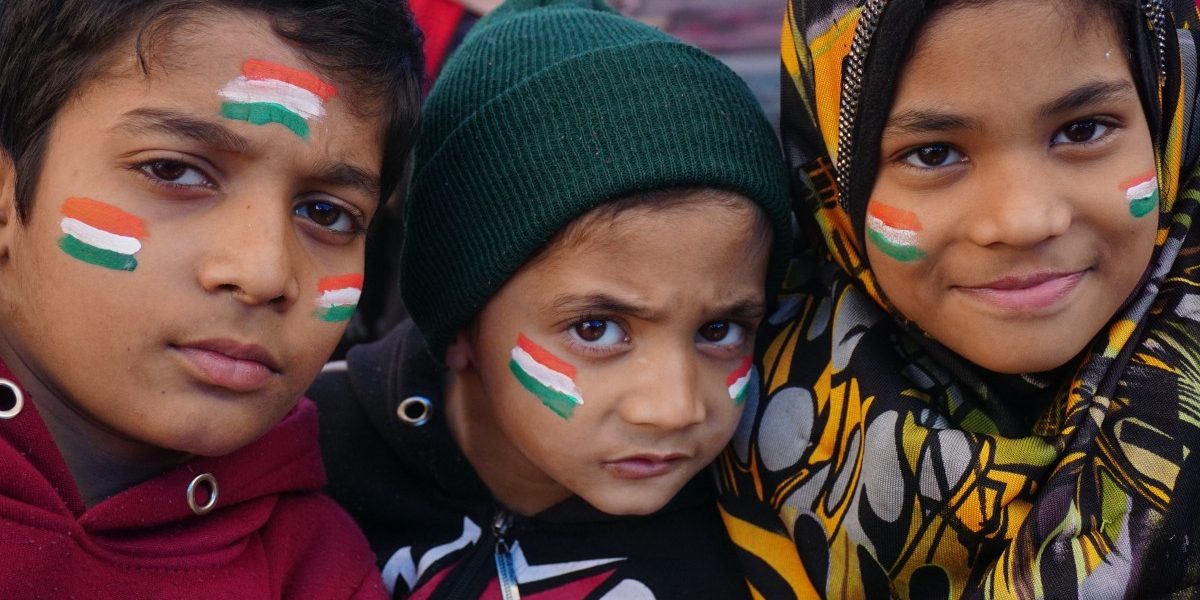 Children with the flag colours painted on their faces. Photo: Shome Basu

As one of midnight’s grandchildren, I grew up with the idea that India was a unified secular democracy, with a thriving press, and one where all religions could blossom, albeit in most parts of the country. At home and at school, Independence Day, Diwali, Eid, Christmas and Navroz were equally celebrated as integral to our shared Indian identity. I viewed the Indus Valley Civilisation and the Mughal Era as equally important to India’s history and its progress, since their influence is present in our day-to-day lives from clothing to food to architecture, rather than breaks in India’s trajectory.

In my later years of school, heated television debates shaped our impression of the world and marked a shift in the tone of politics and history. Quiet and intellectual discussions about Nehru’s alleged rivalry with Patel, to Gandhi’s limited role in the independence struggle, and the ‘Islamisation’ of India became bombastic shouting matches on television, which percolated into discussions between peers and authority figures. This stood in stark contrast to the message of harmony and secularism I had imbibed from my family and my teachers in junior school. This jarring change in narrative made me wonder how was the India that I grew up in created, and why are its ideals under threat? Narratives surrounding the freedom struggle dominated my understanding of history, but my understanding of post-independent India’s successes and failings was limited.

On August 15, 1947, it was unclear that the results of India’s experiments in democracy, secularism and universal franchise would result in the India I was born into. Celebrating 75 years of independence is momentous, since no one knew if India would survive because of the looming threats of economic devastation, communalism, secession and even the Cold War. It is a testament to the freedom struggle, the foundations laid by India’s founders, and to the first generation of scientists, politicians, bureaucrats and businessmen who spent their lives forging a unified India so that my generation could grow up with the luxury of taking Indian unity and democracy for granted.

Personally, 75 years on, India has not only exceeded expectations by emerging as a unified, secular and thriving democratic republic, but in its ability to shape industries from pharmaceuticals, consumer goods, statistics, information technology, and the arts.

It is inspiring to grow up knowing that India is the world’s pharmacy and manufactures medicines at a low cost. While studying overseas, statistics professor relied on methods developed by India’s statistical agencies. I was unaware how much Indians were loved abroad  soft power until I travelled to East Africa and Turkey, where locals would listen to Bollywood music in cafes, in cars and in public squares. Bollywood icons from Raj Kapoor to Amitabh Bachchan have captured the imagination of citizens across the developing world.

When I imagine living in India in 2047, I have a long wish list.

In 2047, I hope that the experience of living in cities significantly improves. I look forward to living in an India where I do not need to swerve around cars and potholes to walk down the street. One where cities are pedestrianised and are transit oriented, and easily walkable, rather than an obstacle course. I wish to see cities where public spaces are accessible and plentiful.

I hope that the humanities are viewed as subject integral to one’s education and shape people’s opinions, rather than being viewed as an ‘easy’ subject for the worst performing students. I look forward to the day where books and movies are not banned for inflammatory, and one where opinions are formed not by rumour, or WhatsApp. I look forward to the day when the state steps away from personal choices and lets citizens’ rights be the forefront of the republic, in marriage, consumption, worship and more.

This idealised version of 2047 can only occur if India is able to resolve some of its biggest challenges. The state of Indian democracy is worrisome and could pose a significant threat to its future. Electoral bonds have made India’s vibrant and dynamic elections hostage to anonymous corporate donations, to the benefit of the ruling establishment. Simultaneously, increasing state control over the judiciary and autonomous union agencies work to undermine the rule of law and can curtail individual liberties, best exhibited in the rise of cases filed under anti-terror and money laundering laws.

Simultaneously, without an active response to the threat of climate change, India may become more inhospitable. Worsening air pollution, shrinking water supplies, erratic rains and harvests are already making swathes of the country unliveable. Major cities like Bombay and Delhi are already witnessing the harmful impacts of climate change; their situation will worsen without an active response to the climate crisis.

As a historian, I draw on the past to envision my future. In a similar vein, my vision of India would be one that blends the ideals of different founders fathers and of different administrations. A hundred years after independence, I hope India embraces notions of democracy and secularism that dominated the 1950s and 1960s, combined with the desire to strengthen the economy as seen under in the 1990s. I would like to see an India where Ambedkar’s vision for a society bereft of caste discrimination is realised, where Jawaharlal Nehru’s scientific temper dominates policy making and individual thinking, one that adopts Atal Bihari Vajpayee’s approach to national security, one that imbibes Dr Manmohan Singh’s desire to uplift the poor, and embraces M.K. Gandhi’s vision of the truth.